Shown here is a version of Roman, known as Single Stroke Roman. It is called this because unlike some of the more complicated Roman letters, each letter can be created without going over any of the strokes more than one time. This makes Single Stroke Roman very useful for poster making and signs. For most letters the nib is held flat so it is parallel with the baseline. For "s,v,w,x,y,z, and parts of i, j, and k" the pen is angled, somewhere near 30 degrees. 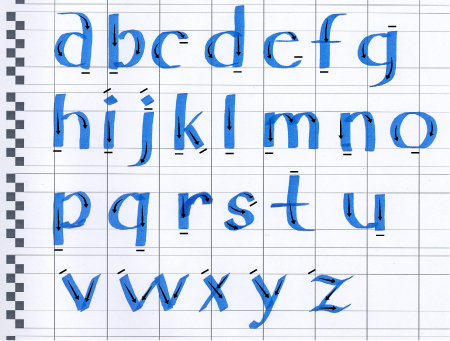 Another good alphabet to learn is called "foundational".

Here are links to a nice site with animations showing how to form this alphabet.
Lower Case and Upper Case

There are three basic types of pens used in writing calligraphy.

Dip pens are simply a metal nib that fits into a solid handle. The nib of the pen must be dipped into an ink bottle as you write. 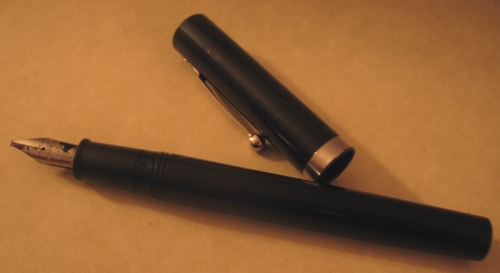 Fountain pens have an ink cartridge in the handle, which supplies ink to the nib. As long as there is ink in the cartridge, you do not have to stop and dip the pen in a bottle.

Felt tipped pens are complete with a felt nib, and ink in the handle. Most cannot be refilled, but some of the more expensive art pens can now be refilled, and have the felt tips replaced.

This set of pens are double ended, with a 3.5mm tip on one end, and a 2mm tip on the other.

Pens Come with nibs of varying width. The width of the pens nib, usually measured in millimeters, will effect or determine the size of the lettering. When writing calligraphy, most lettering types are measured in "Nib Widths". Italic script lower case, can be specified as five nib widths in height. The ascender and descender height is also measured as three or four Nib Widths (or N.W.). 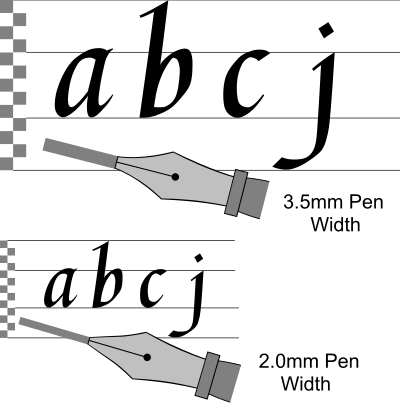 One of the best ways to make lettering for posters is actually with pencils. By placing two regular pencils beside each other and joining with tape, or elastic bands, you can sketch the letters onto a poster, and then use felt markers, paint, or crayons to finish the letters. This is a safe way to make posters, because you can erase any mistakes and redo that spot, while in the sketching phase. If you are making very large letters, you can use 3 or even 4 pencils, with the middle pencils simply used as spacers.

First step is to use the two pencils to sketch the lettering.

Second step is to fill the lettering in using the method of choice. Here the letters are painted in, but other choices could be felt pens, crayons, etc.

Here is a complete sign. Normally I'd not recommend mixing two fill styles like this on the same poster. It's shown here as an example of possible ways to fill in the letters. A common mistake, since computers have become such a popular tool, is to place too many types of lettering or typefaces on the same piece. Best practice is to limit your typefaces to as few as possible. You should have a good reason to use more types, and they should add to the look, not detract from it. 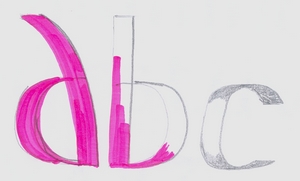 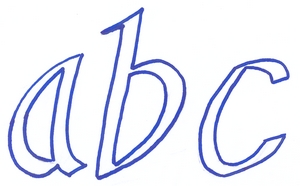 Margins will vary for different styles and shapes of posters, but there is a way to lay out an standard portrait page that can be helpful.
This involves 3 steps. 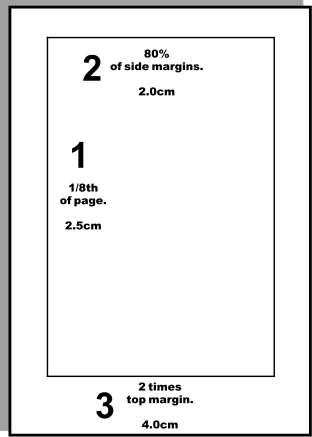 On the left is the standard margins as calculated above. On the right is a page where all four sides are equal. This creates the illusion that that he text appears to be lower than center on the page. 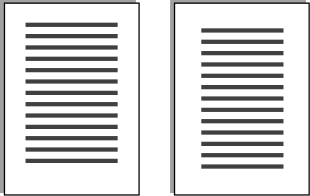 If you have a page wider than it is tall, it is best to leave more margin on the sides than the top and bottom.

If your page is tall and narrow, better to leave more margin at the top and bottom.

Use upper and lower case lettering appropriately. All capital letters is usually difficult to read.

Contrast is an important concept when making posters. The most attractive and attention getting posters have high contrast. Black lettering on a white or nearly white background is considered the highest level of contrast.

Be creative when making posters. Experiment with lettering to create a desired effect. Just be careful to make sure that the creativity does not make the message hard to read. This example shows a design with custom lettering. It is still easily readable.

One suggestion is to complete one poster of the Pathfinder Pledge, Law, Aim, or Motto. You could complete the requirement for your level in the section on Personal Growth - Commitment. A poster like this would be considered an art project. 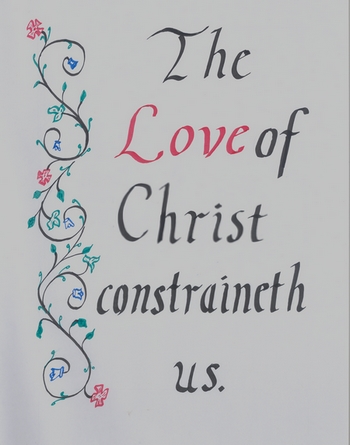 Remember that this requirement is to make posters in a variety of sizes. You do not have to make every poster with large poster boards. Perhaps one can be legal or even letter size. Be creative.

Some suggestions for topics: Some of these ideas will help you with other Pathfinder honors.

It is a good idea to create a practice sheet for each of the different alphabets you are learning.

You can also find sheets like this on the internet available for download and print them, but they may not be exactly the right height for the pen you are using.

Follow the arrows and numbers shown on lettering stroke guides. If you deviate from these guides and try to draw the letters based on their appearance alone, you’ll have trouble forming the letters properly and will likely develop bad habits.

It's not a bad thing to trace from a guide when first learning. Don't forget to follow the arrows and numbers in order even when tracing, to avoid forming bad habits.

For each alphabet style, practice strokes that are found commonly within the letters. 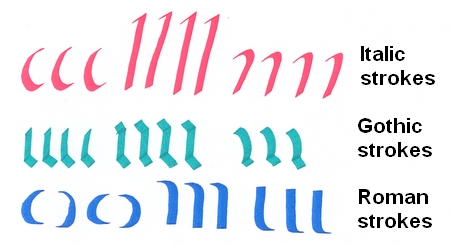