The usual way to control bleeding is to put pressure directly onto the wound, either with the hand directly or with a dressing of some sort (bandage, handkerchief, tea towel etc). Do not forget that any wound which is not controlled within a minute or two is a medical emergency; and any deep or large wound must receive medical attention as soon as possible. 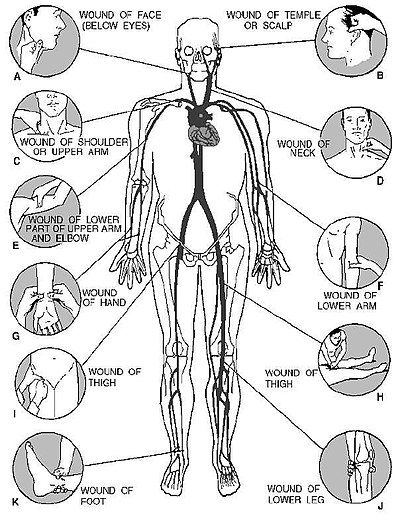 It is sometimes not possible to press directly on a wound: for example, there may be a foreign object inside the wound, or a broken bone protruding outside, or the wound may be too large or be inaccessible (e.g. if the limb is trapped by some immovable object). In this case, the only way to control the bleeding is to compress blood vessels over particular pressure points (usually where arteries cross over bones near to the surface of the skin). This technique can be used to control external bleeding from arm wounds and leg wounds.

The correct point is determined by finding a pulse on a victim similar to that felt in the wrist when taking one's own pulse. This point could be located in the wrist, the arm (on the soft underside of the elbow), the groin, or behind the knee. This is the position where a rhythmical pulsation can be felt. Pressure can then be applied over this point -- the artery -- to control bleeding.

Once an artery is compressed over a pressure point, it must not be compressed for more than 10 minutes: any longer in one go can cause irreversible damage to the limb. Typically pressure would be applied for 10 minutes, then released for a couple, then reapplied and so on.