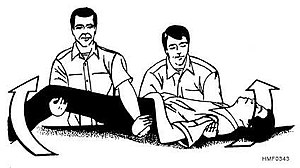 One two-person carry that can be used in emergencies is shown here. Two rescuers position themselves beside the casualty, on the same side, one at the level of the chest and the other at the thighs. The rescuers interlock adjacent arms as shown, while they support the victim at the shoulders and knees. In unison, they lift the victim and roll his front toward theirs. This carry must not be used to move seriously injured persons.