1.Do one of the following:

a. Collect, identify, and preserve at least 16 species of spiders. Place on each specimen bottle a label showing the locality and date of capture and the spider's common or scientific name.

b. Make colored drawings or paintings of at least 16 species of spiders, life size or larger and in natural coloring. Label each with its common or scientific name.

c. Take color photos of at least 16 species of spiders. Identify each picture as to its locality, date taken and the common or scientific name of the spider.

http://www.byteland.org/spiderfest/index.html has a perpetual spider photo contest along with pointers on how to take photos of spiders.

2. What is the largest member of the spider family?

If you read this question as "Which spider is the largest of the spider family?" The answer is the goliath bird-eating spider from the jungles of the coastal rain forests of South America. The largest ever found had a leg-span of more than 11 inches.

If, on the other hand, you read this as "Which family of spiders has the most species?" Then the answer is the Jumping Spiders (Order Araneae, Family Salticidae)with over 4000 known species.

3. Write or give orally a description (forty words or more) of a spider that has gained notoriety in your region.

4. Give three ways in which spiders differ from insects.

5. Make a careful drawing of an orb web. 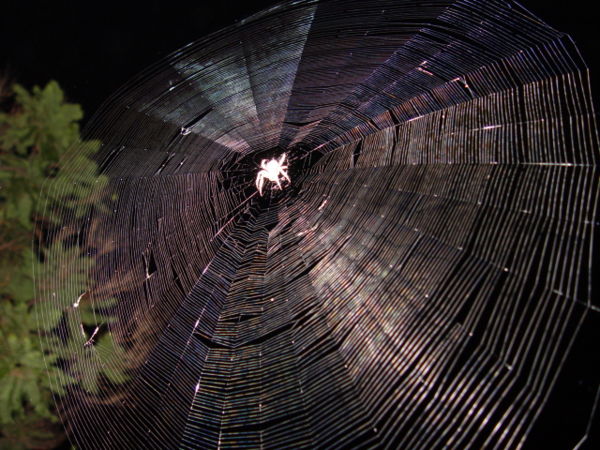 6. What other kinds of webs are there besides the orb web?

Funnel & Sheet webs spun by grass spiders, Family Agelenidae. The Sheet web is used to catch pray while the spider hides in the attached Funnel web for just the right time to scurry out to the helpless victim

7. What do spiders eat? Make a list of victims found in spider webs.

8. For what is a spider web useful?

9. Find two references in the Bible to spiders and their webs.

Accept any 2 of the following 3.

There be four things which are little upon the earth, but they are exceeding wise: The ants are a people not strong, yet they prepare their meat in the summer; The conies are but a feeble folk, yet make they their houses in the rocks; The locusts have no king, yet go they forth all of them by bands; The spider taketh hold with her hands, and is in kings’ palaces. Proverbs 30:24-28

Behold, the LORD’S hand is not shortened, that it cannot save; neither his ear heavy, that it cannot hear: But your iniquities have separated between you and your God, and your sins have hid his face from you, that he will not hear. For your hands are defiled with blood, and your fingers with iniquity; your lips have spoken lies, your tongue hath muttered perverseness. None calleth for justice, nor any pleadeth for truth: they trust in vanity, and speak lies; they conceive mischief, and bring forth iniquity. They hatch cockatrice’ eggs, and weave the spider’s web: he that eateth of their eggs dieth, and that which is crushed breaketh out into a viper. Their webs shall not become garments, neither shall they cover themselves with their works: their works are works of iniquity, and the act of violence is in their hands. Isa. 59:1-6

10. What are the chief enemies of spiders?

Due to excessive habitat destruction, man is the spiders worst enemy.

Dust mites live in our homes and eat the dead skin that comes off our bodies. Many people are allergic to dust mites. Spiders eat the Dust Mites, thereby, assisting in allergen control.

Spiders are an integral part of the food chain. Because the spider eats and is eaten, it helps to keep the ecosystem balanced. Without spiders the ecosystem would become imbalanced, killing all living things, including the human race in a relatively short period of time.

b. Hurt us and our property?

Some spiders are poisonous. Their bites can range from painful to deadly if the correct treatment is not used within a short time after the bite.