The Percheron is a breed of powerful rugged draft horses that originated in the Perche valley in northern France.

Like many old breeds, the Percheron's exact origins are unknown, but it is said that its ancestors were crossbred between the heavy "forest horse" type of animal native to northern Europe and the Arabians that were brought to Europe by the Moors. Percherons probably owe their size and weight to their use as battle mounts during the Middle Ages. After the invention of gunpowder, heavy warhorses were no longer needed, so the Percheron took up its new job pulling heavy French stagecoaches. With the invention of the railroad, Percherons switched to farm duty and heavy labor.

It is probably because of this evolution that the modern Percheron is such a versatile and adaptable horse. Today, Percherons serve as logging horses but also are valued as pleasure driving horses, riding horses, and as competitors in both regular horse shows and in draft horse showing.

Percherons are noted for heavy muscling and for an aspect of ruggedness and power. Also characteristic of the Percheron is clean action and quality conformation of the feet and legs. The mane is thick, though the tail is usually cut short. The breed is close coupled, wide and deep through the chest, with plenty of back rib. The muscles of the forearms, croup and gaskins are especially emphasized in a good drafter, and ease and balance of gait is essential. The horse is also expected to be of good temperament and be an easy keeper.

The Percheron head and neck is typical of the correct draft horse. Good Percherons have a large and full prominent eye, a broad and full forehead, and straight face. A wide jaw and refined ears attractively set and carried with animation are visible evidence of the Percheron's Arabian ancestry. Stallions should have a ruggedness about the head and mares should have a feminine look. The neck is well-shaped and powerful

In recent years, modern show Percherons have been bred for a longer, thinner neck, a longer back, and longer, smoother-looking muscles. These types of modern percherons are used mainly as show horses for competition. 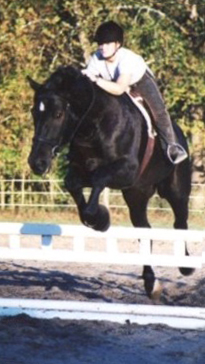 A Percheron under saddle, used as a sport horse.

The Percheron has a very pleasing disposition, and is proud, alert, and intelligent. They are generally very gentle horses, well-suited for driving, and are strong and willing workers. The Percheron is readily adapted to varying climates and conditions. They have the strength to pull heavy loads and the graceful style to pull a fine carriage. Percherons can be ridden and some have even been trained to jump.

Percherons are generally black or gray. Some registries only accept those two colors, though chestnut, sorrel, and bay colors are acceptable for registration in the US with a DNA test confirming their parentage. Gray and black are produced by dominant genes. The red gene for chestnut is recessive, and a red foal can only result from the mating of two black horses if they are heterozygous, having the red gene present in both sire and dam, and even then it is only a one in four chance that a chestnut will be produced. (See equine coat color genetics)

Some Percherons have white markings on the head and feet, but excessive white is undesirable.

Percherons can be long-lived horses, living over 25 years. An unverified record states a Percheron lived to be 41.Template:Fact