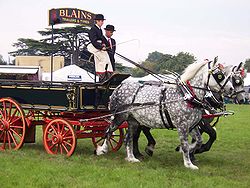 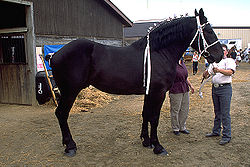 The Percheron is one of the most famous draft horses from France, originating in the region of Perche. The Percheron is used for agricultural work, makes an attractive parade horse, and is a most animated and powerful show horse in heavy harness.

Percherons are generally black or gray, though chestnut, sorrel, or bay are acceptable for registration in the US with a DNA test confirming their parentage. The red gene is recessive and a red foal can result from the mating of two black horses providing that the red gene is present in both sire and dam. North American horses with a high percentage of Justamere Showtime breeding are more likely to carry the recessive gene.

Justamere Showtime himself is present in nearly all Percheron pedigrees in the US and Canada. Virtually every leading stallion in the breed can trace back to Showtime multiple times. Two of Showtime's most widely used descendants were Highview Dragano and McGee, whose get totally dominate today's showring breeding programs. Highview Dragano is the sire of the late, great, Blackhome Granduer Lyn, who, like his sire, was well known for siring beautiful, feminine mares with excellent feet and hocks. McGee's son MG's Prince has sired countless showring champions and two world champion stallions- Sterling's Thunderstik and Pleasant View King. Thunderstik was also the sire of HF Thunder's Supreme, the 2004 World Champion. Pleasant View King is one of the most popular sires of today, with his get topping leading sales with amazing regularity. Another Prince son, All-Star's Prince Rocket, is gaining momentum as a sire of both halter (conformation) and hitch (performance) horses. The Dragano and McGee lines are known to cross exceptionally well.

Another heavily used modern horse was Blackhome Duke, who was not of Showtime breeding. Duke was heavily line-bred, and was the perfect example of what can go so very right with the practice. Careful use of linebreeding will concentrate the genetics used, making them more potent. His sire and dam were sired by the same stallion, Rolling Acres Leonet, out of unrelated mares. Blackhome Duke was the sire of scores of champions and a number of amazing broodmares. His best known son, Windermere King Cong, is following in his sire's considerable hoof prints. Cong's dam was the Mrs. R.L. Robinson mare Camille, many times a hitch and halter champion in her own right. Three of Camille's four grandparents were sired by Justamere Showtime. Another Duke son, Blue Ribbon Farms Hercules, was crowned World Champion in 2002 and has proving to be a good breeding stallion.