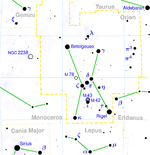 A constellation is any one of the 88 areas into which the sky - or the celestial sphere - is divided. The term is also often used less formally to denote a group of stars visibly related to each other in a particular configuration or pattern.

Some well-known constellations contain striking and familiar patterns of bright stars. Examples are Ursa Major (containing the Big Dipper), and Orion (containing a figure of a hunter). Other constellations do not encompass any discernible star patterns, and contain only faint stars.