Adults are mainly black with a red crest and a white line down the sides of the throat. Adult males have a red line from the bill to the throat and red on the front of the crown. In adult females, these are black. They show white on the wings in flight. The only North American birds of similar plumage and size are the Ivory-billed Woodpecker of the Southeastern United States and Cuba, and the related Imperial Woodpecker of Mexico. Both of those species are extremely rare, if not extinct. 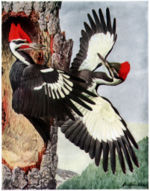 Their breeding habitat is forested areas with large trees across Canada, the eastern United States and parts of the Pacific coast. They nest in a large cavity in a dead tree or a dead part of a tree; this bird usually excavates a new home each year, creating habitat for other large cavity nesters.

This bird is usually a permanent resident.

These birds chip out holes, often quite large and roughly rectangular, while searching out insects in trees. They mainly eat insects, especially beetle larvae, carpenter ants, and fruits, berries and nuts.

The call is a wild laugh, similar to the Northern Flicker. Its drumming can be very loud, often sounding like someone striking a tree with a hammer. This bird favors mature forests, but has adapted to use second-growth stands and heavily wooded parks as well.