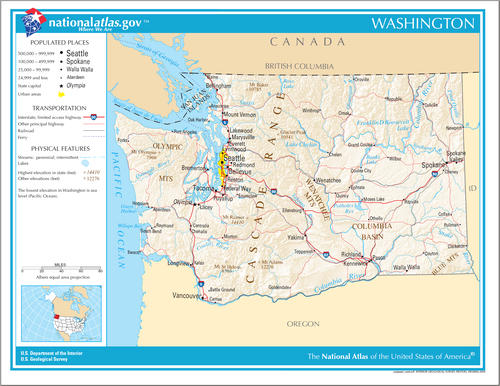 Ebey's Landing National Historical Reserve This rural historic district preserves and protects the historical record of Puget Sound exploration and settlement from the 19th century to the present.

Fort Vancouver National Historic Site From 1825 to 1849, it was the western headquarters of the Hudson's Bay Company's fur trading operations and a cultural and commercial center in the Pacific Northwest.

Klondike Gold Rush National Historical Park Commemorates the important role that Seattle played as the staging area for the Yukon Territory gold rush of the 1890s.

Lewis & Clark National Historic Trail In their search for a water route to the Pacific Ocean, Lewis & Clark opened a window onto the west for the young United States.

Mount Rainier National Park This greatest single-peak glacial system in the United States radiates from the summit and slopes of Mount Rainier, an ancient volcano.

Nez Perce National Historical Park The 38 sites of the park in Idaho, Montana, Oregon, and Washington preserve and interpret the history of the Nez Perce people.

North Cascades National Park Sitting deep in the wild northernmost reaches of the Cascade Range in northwestern Washington, it is flanked on the south, east, and west by national forest lands and on the north by provincial lands of British Columbia.

San Juan Island National Historical Park Marks events on the island from 1853-1872 in connection with final settlement of the Oregon Territory's boundary, including the so-called Pig War of 1859.

Whitman Mission National Historic Site Commemorates the mission of Marcus and Narcissa Whitman at Waiilatpu, an important way station in the early days of the Oregon Trail.

There are many state parks.

Washington has three conferences covering different parts of the State:

Also the next level up, the Union Conference is based in Washington State.