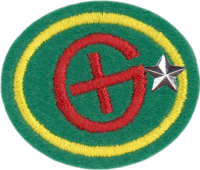 For tips and instruction see Geocaching.

Briefly describe the origin of the global positioning satellites? What is their history – when and how did they get there? By whom?

The design of GPS is based partly on the similar ground-based radio navigation systems, such as LORAN and the Decca Navigator developed in the early 1940s, and used during World War II. Additional inspiration for the GPS system came when the Soviet Union launched the first Sputnik in 1957. A team of U.S. scientists led by Dr. Richard B. Kershner were monitoring Sputnik's radio transmissions. They discovered that, because of the Doppler effect, the frequency of the signal being transmitted by Sputnik was higher as the satellite approached, and lower as it continued away from them. They realized that since they knew their exact location on the globe, they could pinpoint where the satellite was along its orbit by measuring the Doppler distortion.

The first satellite navigation system, Transit, used by the United States Navy, was first successfully tested in 1960. Using a constellation of five satellites, it could provide a navigational fix approximately once per hour. In 1967, the U.S. Navy developed the Timation satellite which proved the ability to place accurate clocks in space, a technology the GPS system relies upon. In the 1970s, the ground-based Omega Navigation System, based on signal phase comparison, became the first world-wide radio navigation system.

Define latitude, longitude. What is meant by degrees, minutes, seconds?

of the person's position. Therefore, a degree is divided into 60 finer measurements called minutes. Minutes in Geocaching has little to do with time.
Seconds
Even with the finer angular resolution of minutes, we can still only get to within about 1670 meters

of a person's position, so the minute is divided into seconds. One second can get us to within about 28 meters

of a position, so they are typically specified to a couple of decimal places, as in "25.65 seconds".

Complete two or more of the following:

Establish and maintain a new geocache in your area for at least 6-months.

Be sure to read these guidelines for hiding a geocache. In short:

Send out and follow a TB (travel bug) for 6 months.

You can order travel bugs from geocaching.com and from other places as well. Think of some sort of goal for your TB, and plant it in a cache - maybe even one you have started yourself in requirement 6a above.

Though travel bugs are not expensive, it's even cheaper to find them and track them than it is to buy one and send it out. Watch the geocaches in your area and look for TB's to be dropped off in them. Then pick them up and help them meet their goals.

Participate in a geocache meeting or event in your area (attend).

Check the geocaching calendar to find an event near you. If there is not one, you could always host one yourself. If you host it at your church you will raise your community's awareness of your church. However, do not try to make this an evangelistic meeting, as this would be frowned upon by the geocaching community and would give you and your church a bad name. It is enough that people learn where your church is.

What are the laws/rules/guidelines for placing caches in the following locations?

It is a federal offense in the United States to trespass on an active railroad right-of-way. Geocaches should be located a minimum of 45 meters

from any active rail line.

A person who places a cache is responsible for maintaining it. This means it must be physically visited on a regular basis. Unless the cache placer is able to pay frequent visits to the cache site, the cache should not be placed.

National Forests are managed by the U.S. Forest Service, which recognizes geocaching as a legitimate recreational activity. However, geocachers must be careful to observe the rules of using the National Forests. Trees, plants, and streams are not to be damaged.

Wilderness areas within National Forests are not to be used for geocaching. These areas are to remain undeveloped, and all traces of human activity are to be minimized.

Find and record at least 18 geocaches; include:

a. Traditional cache with 3-star difficulty
b. One Multi-level
c. One virtual
d. One micro

You can record your finds on the geocaching website, so don't worry about setting up some sort of elaborate system. Getting each of these types of cache will most likely come naturally, so you don't really need to pay particular attention to that when you get started. As you near your 18th cache, check them over and see how many of these four types you already got "automatically" - then work on getting the rest. By the time you log your 18th, you will likely have found a new hobby, and more will come.

Virtual caches were discontinued and only a few remain grandfathered. Earthcaches, however, are a form of virtual cache.

Requirement b) says Multi-level but should really be Multi-stage or just Multi-cache which is what Geocaching.com calls them.

Write about your geocache find in your logbook on the geocache website.

From the Main Page of www.geocaching.com at the top right, click on “Create a Membership!”, for a free account choose “Get a Basic Membership”. This is a family friendly, kid safe web site. No personal information is available from this site. Emails are safe and password protected through this system. When you are a member you can post into the logbooks your cache finds.

Note to instructors: Notice that these requirements do leave the opportunity for a GROUP to go find a cache and use a pre-existing Geocaching account to write the log on the geocache website. Each individual Pathfinder does NOT need to write a log. No "register for a free Geocaching.com account" requirement until the Advanced honor.

Discord? What about it!
This page was last edited on 4 October 2021, at 13:17.
This is an official site of the North American Division Youth & Young Adult Ministries of the Seventh-day Adventist Church.
9705 Patuxent Woods Dr
Columbia, MD 21046