1. Describe the proper use of the following:

A thimble is a protective shield worn on the finger or thumb. It is used for pushing a needle through a piece of fabric in situations where the pressure applied to the needle would otherwise cause the needle to pierce the skin. A thimble is most usually made from metal, but can also be found made from leather, rubber, wood, glass or china.

A cloth tape measure is used for measuring a person for the purpose of sizing a garment. It is also used to measure cloth.

Scissors are used for cutting cloth. 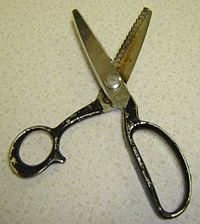 Pinking shears are useful for cutting woven cloth. Cloth edges that are unfinished will easily fray, the weave becoming undone and threads pull out easily. The sawtooth pattern does not prevent the fraying but limits the length of the frayed thread and thus limits damage. 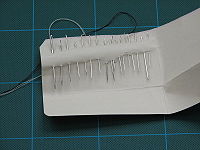 Needles are used for piercing a fabric and passing a thread through it for the purpose of making a stitch. This can be done by hand or by machine. A hand needle has a hole in it (called the eye) near its back. A machine needle has its eye near the point.

2. Become acquainted with the sewing machine in your home or school. Identify: 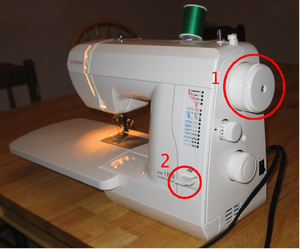 The balance wheel provides a method of manually moving the needle up or down. It is used to raise the needle out of the cloth when the stitch is finished, or to raise the thread take-up to make it accessible when threading the machine. 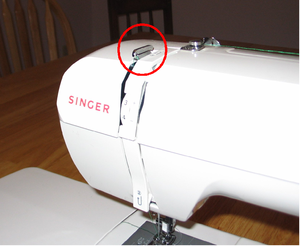 The thread take-up moves up and down with the needle, keeping the thread tight and drawing it from the spool as needed.

The presser foot holds the cloth in place while the needle runs thread through it. See the photo below for its location. 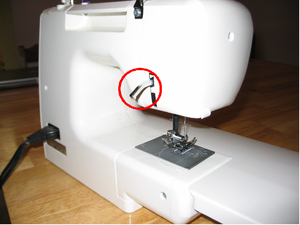 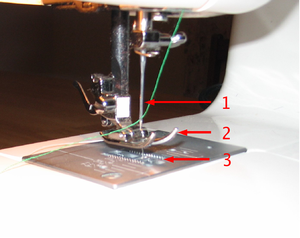 The needle stitches the thread (green in the photo) through the cloth. 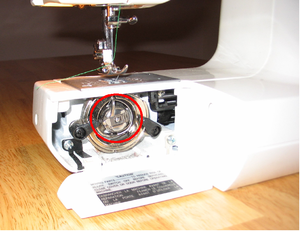 The bobbin supplies a second spool of thread. Between the bobbin and the needle, two pieces of thread are tied into a knot forming the stitch. The bobbin can be filled with thread by removing it from the position shown and placing it in a mechanism on the top of the sewing machine. It is usually filled with the same color thread as is thread through the needle. The bobbin's thread comes up from the bottom of the machine through a plate between the feed dogs. 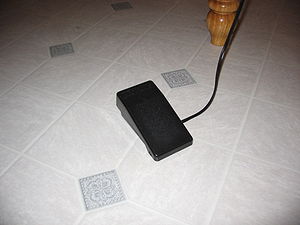 The backspace lever (shown in the photo with the balance wheel) reverses the direction that the feed dogs move the cloth. A stitch is often started an inch or so away from the back edge of the cloth with the backspace lever activated. When the stitch gets close to the back edge of the cloth, the lever is released and the cloth moves forward through the machine. Stitches are also ended this way. Doing this provides a stronger seam and locks the stitch in place.

3. Demonstrate how to properly thread and run the machine.

First, check that the bobbin has enough thread of the right color for the work you wish to do. If it does not, you will need to wind a bobbin. First, pass a few inches of thread through a hole in the bobbin. Then place the bobbin on a spindle located on the top right of the sewing machine. You may need to move a lever into position. Loop the thread from the spool going to the left around a hook on the left of the machine, and then to the bobbin. Wind the thread back onto the spool until it is tight, but be careful not to pull it out of the hole in the bobbin! Then gently press the foot lever. The machine should wind thread onto the bobbin. When the bobbin is full (or when it has as much thread on it as you think you'll need), release the foot pedal, cut the thread, and place the bobbin back into its compartment.

The spool mounts to a large spindle at the top center-right of the sewing machine. From there, the thread travels to the left to a button-like pulley and turns towards the operator. It travels across the top of the machine into a slot, and then turns downwards. Near the front, it should wrap around another "hitch" and go back up to the top of the machine, where it loops into a slot on the thread take-up. Again, the thread turns down until it gets to the needle, passing through the eye. (It helps if you trim the thread with sharp scissors before trying to thread a needle).

4. Put a hem in one of the following items showing neat and even stitches. a. Towel, b. Apron, c. Flannel baby blanket, d. Flannel lap blanket

To make a hem, it is best to visit the ironing board before doing any stitching. Fold the cloth over and press a crease where the seam will be. Then fold it over again and press another crease. This will tuck the loose edge of the fabric into the seam so that it will not be exposed, and that will prevent it from unraveling.

Pressing the seam first helps tremendously when stitching the hem, because it prevents the hem from creeping. Once the hem is creased, place the item on the sewing machine with the crease to the right. Lift the presser foot and slip the item beneath it. Line up the needle left-to-right so that it will place the stitch the desired distance from the edge of the hem. Line it up front-to-back so that the needle will pierce the cloth a half inch or so from the back edge of the hem. Then lower the presser foot. Hold down the backspace lever and gently press the foot pedal. As soon as the stitch reaches the back edge of the cloth, release the backspace lever, and the sewing machine will begin stitching in the forward direction. Going backwards first locks the stitch in place.

Gently guide the fabric into the sewing machine, paying careful attention to the edge. Sewing machines have lines etched into the surface beneath the needle for use as a guide. Try to guide the cloth using one of these guide lines to keep the stitch a constant distance from the edge of the hem. Don't try to go too fast. If you make a mistake, stop - you may need to remove the stitches and start over. It is far better to start over than to just keep sewing!

As the stitch nears the other end of the hem, slow down. Stitch all the way to the edge of the hem, and press the backspace lever just as you reach it. Stitch backwards for about a half inch, again to lock down the stitch. Then stop. Use the balance wheel to raise the needle out of the cloth. You may need to raise the needle to its highest point so that the thread on the underside is released. After the needle has been raised, lift the presser foot and slide the fabric out from under the needle. Cut the thread (there will be two - a top thread and a bottom thread), but leave at least three inches of thread coming out of the eye of the needle. Otherwise, the next attempt at making a stitch could easily unthread the needle.

Remove the cloth from the machine and cut the loose threads from the hem. Ta da! You should now have a nice hem, and the machine should be ready to stitch another!

5. Demonstrate your ability to properly sew on buttons and snaps.

The first step in sewing on a button or a snap is to properly locate it. If you are replacing a button, fasten the remaining buttons first - then see where the button hole for the missing button lines up. Thread a needle and tie it off, then mark the location of the button by passing the needle through the cloth from the underside. If desired, you can then unbutton the other buttons.

Be sure to use sturdy thread when attaching a button. They take a lot of abuse. If attached well with strong thread though, the button should remain fastened for years of heavy use.

6. Tell what is meant by selvage, bias, and grain of fabric.

Selvage
the edge of a piece of fabric, specially woven to resist unraveling.
Bias
is a line that would go from corner to corner on a square piece of fabric. The bias of a fabric is very stretchy, crossing the fabric's threads at a 45° angle.
Grain of Fabric
is the internal lay of the fabric - that is how the threads from which the fabric is woven are arranged. The lengthwise grain is parallel to the selvage, and the crosswise grain is perpendicular to the selvage.

7. Make a laundry bag for camping, or a similar simple item.

Once the circle and rectangle have been cut out, sew a wide hem along the width of the rectangle. Then thread a length of rope through the hem, leaving about six inches of rope coming out from both ends.

The next stitch will form a tube from the rectangle. This stitch should be made while the tube is inside out, so make sure the roped hem is positioned as you want it before starting. Pin the two edges of the rectangle together and make a stitch along the entire length of the edges about 5/8" from the edge. This should complete the tube. Once the tube has been stitched, tie the two ends of the rope together (use a fisherman's knot as illustrated in the Knot Tying honor). You should be able to cinch up the rope and cloth the opening of the laundry bag. This bag will also be carried by the rope.

Next, with the tube still inside-out, pin the circle to the end of the tube opposite the roped hem. Once the circle is pinned into place, carefully sew it to the tube. When this stitch is complete, turn the bag inside out and admire your work.