1. Define archeology and differentiate it from paleontology.

Archaeology is the digging up of the past. It is finding and discovering lost items and artifacts from humankind throughout history. This is in contrast to palaeontology which is discovering old prehistoric animals that are now extinct.

a. Papyrology
Papyrology is the study of ancient literature, correspondence, legal archives, etc., as preserved in manuscripts written on papyrus, the most common form of writing material in the ancient civilizations of Egypt, Greece, and Rome. Papyrology includes both the translation and interpretation of ancient documents in a variety of languages and the care and preservation of rare papyrus originals.
b. Egyptologist
Egyptology is the study of ancient Egyptian history, language, literature, religion, architecture and art from the 5th millennium BC until the end of its native religious practices in the 4th century AD.
c. Assyriology
Assyriology is the archaeological, historical, and linguistic study of ancient Mesopotamia (ancient Iraq) and of related cultures that used cuneiform writing. The field covers the Akkadian sister-cultures of Assyria and Babylonia, together with their cultural predecessor; Sumer. The names of the country of Syria and the Assyrian Christian minority in Iraq both come from the same root word.
d. Orientalist
A person engaged in Oriental Studies, covering Near Eastern and Far Eastern societies and cultures, languages, peoples, history and archaeology. Newer terms are Asian studies and Middle Eastern studies. Traditional Oriental Studies in Europe is today generally focused on the discipline of Islamic Studies, while the study of China, especially traditional China, is often called Sinology and the study of East Asia, especially in the United States, is often called East Asian Studies.
e. Cuneiform
Cuneiform script is one of the earliest known systems of writing. It uses wedge-shaped marks on clay tablets, made with a blunt reed stylus. The name cuneiform itself simply means "wedge shaped", from the Latin cuneus "wedge" and forma "shape," and came into English usage probably from Old French cunéiforme. 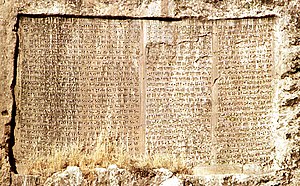 f. Hieroglyphic
Writing with pictures or icons that developed from pictures, popular in ancient Egypt.
g. Paleography
also spelled Palaeography (from Greek παλαιός palaiós, "old" and γράφειν graphein, "to write"), is the study of ancient and historical handwriting (that is to say, of the forms and processes of writing, not the textual content of documents). Included in the discipline is the practice of deciphering, reading, and dating historical manuscripts, and the cultural context of writing, including the methods with which writing and books were produced, and the history of scriptoria.
h. Antiquarian
An Antiquarian is a student of antiquities. More specifically, the term is used for those who study history with particular attention to ancient artifacts, archaeological and historic sites, or historic archives and manuscripts. The essence of antiquarianism is a focus on the empirical evidence of the past, and is perhaps best encapsulated in the motto adopted by the 18th-century antiquary, Sir Richard Colt Hoare, "We speak from facts not theory". Today the term is often used in a pejorative sense, to refer to an excessively narrow focus on factual historical trivia, to the exclusion of a sense of historical context or process.
i. Archeological site
An Archaeological site is a physical place in which evidence of past activity is preserved (either prehistoric or historic or contemporary), and which has been, or may be, investigated using the discipline of archaeology. Sites may range from those with few or no remains visible above ground, to buildings and other structures still in use.
j. Stratigraphy
In a broad sense, stratigraphy is the study of rock layers, but Archaeological Stratigraphy is based on the same idea. The location of an artifact below ground is key to understanding the item in context with other items. Archaeologists look that the strata (or layers) of a site to understand it. If you were to did in Rome for example, near the surface you might find modern trash, asphalt, and Euro coins. As you go deeper into other strata you might find items from the Middle Ages and then the Roman Empire and finally perhaps pre-Empire items. Pottery and coins are good indicators of what historical layer you are digging through.

View of the Citadel of Aleppo (northern Syria), built on top of a tell occupied since at least the third millennium BC

k. Tel, tell, and Khirbet
A tell or tel (Hebrew and Arabic words for a city) and a Khirbet meaning "ruin of or "ruin on a hill" are equivalent terms often used in place names of archaeological sites. They are mounds created by human occupation and abandonment of a geographical site over many centuries. To avoid flooding many places are still built on higher ground, but as cities are built up and destroyed, they grow higher, mostly from decaying bricks. Even young cities exhibit this phenomenon - some Seattle, Washington streets are a full story higher than when the adjoining buildings were built because streets were filled in with garbage, and in Mexico City you can find old buildings that must be entered from stairs that appear to go to the basement (partly from sinking, partly from building up of the surrounding area). The largest city in Israel is Tel Aviv.
l. Replica
a copy of something. Some replicas are intentional fakes meant to fool buyers, while others are created just so people can enjoy them (like replicas of pottery or miniature statues you might find in a museum gift shop). A museum may create an intact replica of a very valuable, damaged, fragile or even completely destroyed item (known from paintings for example) for public display.

Biblical minimalism, also known as the Copenhagen School because two of its most prominent figures taught at Copenhagen University, was a movement or trend in biblical scholarship that began in the 1990s with two main claims:

1. that the Bible cannot be considered reliable evidence for what had happened in ancient Israel; and 2. that "Israel" itself is a problematic subject for historical study.

The position is summarized by this quote: "The Israelite nation as explained by the biblical writers has little in the way of a historical background. It is a highly ideological construct created by ancient scholars of Jewish tradition in order to legitimize their own religious community and its religio-political claims on land and religious exclusivity." — Lemche 1998, pp. 165–66

Biblical maximalism is the conservative/fundamentalist position that the Bible represents an accurate, though incomplete of course, record of historical events for the region and peoples it covers. There was a King David, there was as conquest of Canaan etc. Seventh-day Adventists generally are Biblical Maximalists and all Biblical Archaeology is essentially based on maximalism.

4. Describe or illustrate ten tools that are used in an archaeological excavation. If possible demonstrate how several of the tools are used.

5. Describe the principal techniques of dating an archaeological artifact

6. Name three benefits that biblical archaeology can provide a student of the Bible.

Archaeology can ultimately prove the Bible's truth and testimony. Throughout history many vital discoveries have been made such as those of the Hittites and of the Dead Sea Scrolls.

7. Report on the history of archaeology (minimum of 20 events of significance) by:

a. Writing a two-page research report

b. Illustrating a detailed timeline

d. Other presentation method approved by your instructor

8. Share with a group or instructor the significance of each of the following famous archaeologists (or other archaeologists relevant to your region, country, or division). Be detailed and specific.

9. Assemble a folder with ten archaeological discoveries that have connected with the biblical history of the Old and New Testament. The folder should have the following characteristics:
a. In order by chronological dates or geography.
b. Organized according to the Old and New Testament.
c. Photos.
d. Texts.
e. Bibliography sources.
f. Personal commentary about every artifact or discovery.

a. Assemble a simple model of Jerusalem observing the following:

ii. Different perimeters of the city in the time of the First Temple (David and Solomon), of the Second Temple (Herod and Jesus Christ) and the current Jerusalem

There are a few ways to do this - one is to break out the modeling clay or drywall compound. To define the current city of Jerusalem will require some space, like a table top. Building a model of this scale is a good small group project.

b. Simulate an archaeological dig (often referred to online as a “schoolyard dig”). Either set up the dig OR participate in a meaningful way at all stages of the dig process including:

ii. Laying out the grid/area for excavation

vii. Assessing the importance of the dig process