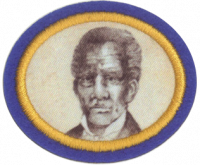 The purpose of this honor is to illustrate how God has led within the Adventist church to share His message through the events, places, and contributions of the people of a specific cultural group.

1. Who was William E. Foy and how did he become involved in the Millerite movement?

2. Name two African American preachers of the Millerite Movement and learn how God used them to share His message.

3. Learn about 3 African American abolitionists who were influenced by the Advent movement.

a. Where was he born and raised?

b. Where did he travel to and with whom?

c. What minister influenced him and where was he baptized?

d. Learn how God used him to share God's message.

5. When was the first African American Seventh-day Adventist Church organized?

a. Why was it organized?

b. Where was it located?

a. Why was it built and who encouraged this endeavor?

b. How and where was the Morning Star used?

c. Learn about several individuals that were instrumental in this work.

d. Discover at least one miracle that occurred on the Morning Star.

a. Who began each publication?

b. What is the current name of the NAD Publication for African Americans?

8. Why was the first African American Adventist Camp Meeting held?

a. When and where was this camp meeting held?

b. How did God use the Camp Meeting to further His work?

9. Name the first African American Adventist College and how did it receive its name.

a. When and where was it founded?

b. Who located the site for the school?

c. What was the size of the property chosen?

a. Where and when was she born?

b. What education did she obtain and from where?

c. What became her life work?

d. To what mission field was she the 1st overseas African American Seventh-day Adventist female Missionary?

11. In 1934 who became the first African American Master Comrade (Master Guide) to be invested?

a. Where and when was she born?

b. What was her life work and whom did she serve for Christ?

12. Who became the first African American Vice President of the General Conference?

a. Where and when was he born?

b. Where did he obtain his education?

c. For what is he most remembered in his ministry?

13. Name the first African American to serve as President of the North American Division.

a. Where and when was he born?

b. Where did he obtain his education?

c. For what is he most remembered in his ministry?

14. When was the first Regional Conference approved?

a. Where was the first regional Conference?

b. What year was the first regional conference begun?

d. In 1946 what Regional Conferences were added?

15. Do one of the following as a presentation at an Adventist Youth/Pathfinder Meeting, campout, or other equivalent event:

a. Create a song, poem, story or skit about African American Adventist pioneers.

b. Create a display of pictures, articles, and resource materials on five (5) African American leaders in your local conference or church.

c. Search the scriptures for at least three stories of people of color and write a one-page review of these stories: (Some resources include – Exodus 4:9-16; Exodus 18; Acts 8)

Discord? What about it!
This page was last edited on 26 May 2021, at 12:57.
This is an official site of the North American Division Youth & Young Adult Ministries of the Seventh-day Adventist Church.
9705 Patuxent Woods Dr
Columbia, MD 21046