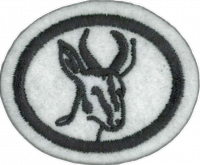 1. Give the general characteristics of antelopes.

2. Give three size-groups of these animals, with two examples of each.

3. Be able to identify at least 15 different antelopes.

4. What do they eat? How do they digest their food?

5. Name three ways in which one benefits from having these animals in the country where one lives.

6. What are “false hoofs?” Which members of this family do not have them?

7. Which antelopes are classed as rare South African animals now? Where can they be seen, outside of the zoo and the museum?

8. What natural enemies do the antelopes have? How do antelopes protect themselves and their young?

a. The largest antelope?

b. The swiftest runner?

g. The national animal of the Union of South Africa?

10. Say which antelope you like to watch most. Tell five of its habits.

Discord? What about it!
This page was last edited on 20 July 2022, at 19:42.
This is an official site of the North American Division Youth & Young Adult Ministries of the Seventh-day Adventist Church.
9705 Patuxent Woods Dr
Columbia, MD 21046