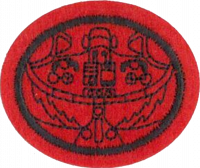 Identify, with real aircraft, the five categories of aircraft and the different classes within each category.

Be involved in an interactive discussion that explores the following:

Bernoulli’s principle and how it applies to airplanes

The four forces of flight and how each affects the flight of an airplane.

Three types of aircraft and their uses in aviation today.

The three principal axes of an airplane. Demonstrate the type of movement the aircraft does on each axis and what controls that movement.

Different types of engines, wings, and other gear and their application/usage.

Correctly identify on a real plane the following exterior parts of an airplane.

We don't have a real plane in the Honor Wiki, but here is some guidance for when you are looking at the exterior of a real plane. A museum of flight with airplanes you can get inside of may be an easy place to meet this requirement. Study up on where the parts should be on the plane and what they should look like before you go, that way you can make all the correct identifications when you are there.

Correctly identify on a real plane the following parts of the interior of an airplane.

We don't have a real plane in the Honor Wiki, but here is some guidance for when you are looking at the interior a real plane.

The requirement does not specify how to detail their role and importance, but a short written or oral report should suffice, although visual depictions, blog posts etc would also be acceptable. Here are links to the Wikipedia articles on each pioneer, which is a good starting point for further investigation:

PREFERRED: Take an intro flight in an airplane and observe the different movements made by three different control surfaces. Record your observations.

The intent here to take a flight sitting beside or near the pilot in the cockpit, not as a passenger on a commercial jet where you learn very little about the process of flying an airplane. This is why the honor says "intro flight". There is likely going to be a fairly significant cost associated with this activity. An intro flight may spur or reinforce the Pathfinder's desire to explore aviation as a vocation or a hobby.

(If an intro flight is not possible) Demonstrate and explain on the ground the different movements made by three different control surfaces. You may do this demonstration on a real aircraft or in a flight simulator.

Interview a mission pilot or missionary who has used airplanes to help tell people about Jesus. As a result of your interview be able to:

List three ways God uses mission aviation to spread the gospel, based on the Great Commission of Matthew 28:18-20

Interview a commercial full-time pilot. As a result of your interview be able to:

List three ways pilots can share Jesus within their workplace, based on the Great Commission of Matthew 28:18-20

As with other honors that require interviewing professionals, the following are good guidelines:

Discord? What about it!
This page was last edited on 1 January 2023, at 21:13.
This is an official site of the North American Division Youth & Young Adult Ministries of the Seventh-day Adventist Church.
9705 Patuxent Woods Dr
Columbia, MD 21046