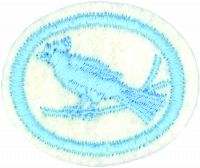 Give two characteristics which set birds apart from all other creatures.

It is often useful to compare features of groups of creatures to see what is the same as other creatures, but in order to identify them, it is useful to find the differences as well. There are five classes of creatures with a backbone. These classes include the fish (Agantha), amphibians (amphibia), reptiles (Reptilia), birds (Aves), and mammals (Mammalia).

All of the vertebrata have a backbone, but birds have a number of unique characteristics such as:

Each of these things seems quite unique, but as we look at the other classes of vertebrata, we find that birds are not the only creatures that can fly. There are flying fish, gliding snakes, gliding frogs and bats. Each class of vertebrates has the capability of crude flight, and bats at least can match the flight ability of the birds. We must also note that not all birds are capable of flight (penguins, ostriches and others are incapable of flight).

Mammals are warm blooded, so that is not unique to birds. Whales, frogs and some of the primates have very musical voices, although few can compare to the Lyrebirds of New Guinea or even a simple Northern mocking bird. Many of the mammals such as meerkats have good eyesight, so this is not unique, and most fish have the ability to sense electro-magnetic fields.

When we have compared the various classes, we find that there are only a few things that are unique to the class Aves.

They all lay hard-shelled eggs which they incubate using their body temperature.

They all are covered with a feather structure that differs greatly from scales and fur.

A ring bone in the eyes of birds is what allows them to focus so well and have such keen eyesight.

All of these characteristics give us an idea of what makes birds unique and also an idea as to why we are so drawn to these colorful, flying creatures.

Name three flightless birds, tell what their diet consists of, and name the country or continent in which each one lives.

Cassowaries are native to the tropical forests of New Guinea and northeastern Australia. Some nearby islands also have small cassowary populations, but it is not known if these are natural or the result of the New Guinea trade in young birds. They are frugivorous; fallen fruit and fruit on low branches are the mainstay of their diet. They also eat fungi, snails, insects, frogs, snakes and other small animals.

The Emu is the largest bird native to Australia. They eat a variety of plant species; the type of plants eaten depends on seasonal availability. They also eat insects, including grasshoppers and crickets, lady beetles, soldier and salt bush caterpillars, cotton-boll moth larvae and ants.

Kiwis are from New Zealand. They eat small invertebrates, seeds, grubs, and many varieties of worms. They also may eat fruit, small crayfish, eels, and amphibians. Their long beaks, with nostrils at the end of them, help them to catch prey.

Ostriches live in the savannas of Africa. They mainly feed on seeds and other plant matter; occasionally they also eat insects such as locusts. Lacking teeth, they swallow pebbles that help as gastroliths to grind the swallowed foodstuff in the gizzard. An adult ostrich typically carries about 1 kg of stones in its stomach.

Penguins are aquatic birds living exclusively in the Southern Hemisphere. Most penguins feed on krill, fish, squid, and other forms of sea life caught while swimming underwater. They spend half of their life on land and half in the oceans.

Give the day of the week when birds were created. Find in the Bible the names of five birds and be able to name them from memory.

Various Bible versions may translate the original Scriptures differently e.g. one version may use "kite," while another may use "falcon." The texts given are examples, and some birds are named many times.

Write or give orally three ways in which God's love and purpose is shown in the creation of birds.

"Children should be encouraged to search out in nature the objects that illustrate Bible teachings, and to trace in the Bible the similitudes drawn from nature. They should search out, both in nature and in Holy Writ, every object representing Christ, and those also that He employed in illustrating truth. Thus may they learn to see Him in tree and vine, in lily and rose, in sun and star. They may learn to hear His voice in the song of birds, in the sighing of the trees, in the rolling thunder, and in the music of the sea. And every object in nature will repeat to them His precious lessons." Child Guidance, p. 46.

1. God created the birds to point to Himself as the provider of all that we need. If He takes care of the birds, He shall surely take care of our needs. (Luke 12:24)

3. The adaptations of birds (especially their beaks, their legs and feet) show us God's creative power.

5. Jesus loves everybody and every thing and as He takes the animals in to account before He does something, He wants us to do so as well. (Jonah 4:11)

Make a list of thirty species of wild birds, including birds from at least five different orders, that you personally have observed and positively identified by sight out of doors.

Birders equip themselves with a good field guide and a checklist of birds found in the the local area they are birding. While the field guide may cover the whole continent or country and include helpful pictures and data that help you fill in the info you need for this requirement, a local checklist will narrow down the birds you can expect to actually see.

You can easily find bird checklists online - look for a birding club in your area or check out /http://avibase.bsc-eoc.org/avibase.jsp?lang=EN which is based in Canada but covers the world with various degrees of completeness.

You can also consult Wikibooks' Guide to Birds to help you identify some birds. As of this writing, this field guide is still in its infancy, so you might be well served to purchase a more thorough field guide book, especially since physical field guides don't need batteries or Wi-Fi. Field guides are generally tailored to a specific area of the world, so be sure to consult one that covers your area.

The Birds - Advanced honor requires observing 30 additional birds and collecting additional information, so if you want to earn the advanced honor you should follow the additional requirements for the first 30 birds right from the start. The requirement says:

10. Make a list of 60 species of wild birds, including birds from at least ten different families, that you personally have observed and positively identified by sight out of doors. For each species on this list note the following: a. Name b. Date observed c. Place observed d. Habitat (i.e., field, woods, river, lake, etc.) e. Status where observed (permanent resident, winter resident, summer resident, migrant, vagrant)

Make a list of five species of wild birds that you personally have positively identified by sound out of doors.

The Guide to Birds has "bird call" links for several birds (though it is not yet exhaustive). Listen to the most common birds in your area so that you may learn to identify them by their calls. Many birds (such as the woodpeckers and the Bobwhite) are a lot easier to identify by their calls, because they are so much easier to hear than to see.

You can also purchase CD's from Peterson's Birding by Ear series. Select one that was made for your region.

Set up a feeding station and report on the bird visitors observed for a period of seven days.

This should be done by the individual

Find a bird's nest, during the nesting season, identify the species of bird that built it, describe the nest in detail, observe the nest for five days, and report what happened at the nest on each of the days.

In the Western Hemisphere: Maintain a hummingbird feeder for 2 months.

What does man-made nectar consist of?

Hummingbird nectar should consist of four parts water to one part sugar (by volume).

Why shouldn't you use food coloring or honey?

Honey promotes the growth of a fungus that can kill hummingbirds&, so it should never be used.

When should the feeder fluid be changed?

The feeder should be cleaned weekly.

How should the feeder be cared for?

Every time you clean the feeder, check for black mold. If you find any, clean the feeder with bleach. Do not clean a feeder with soap (but you can use white vinegar as long as you rinse it thoroughly afterwards). If hummingbirds are not emptying the feeder before the syrup spoils, don't fill it completely next time. Spoiled syrup will appear cloudy and must be discarded - hummers won't eat it.

Clean the feeder thoroughly once per month with a bottle brush. Soak it in a solution of a 60ml

of water. Rinse well, and refill with syrup.

Unless precautions are taken, ants will get into your feeder. Look for a dripless feeder with an ant moat. These are very effective at addressing the problem.

In other areas of the world: Select at least three different habitats in your area and make comparative bird lists of them indicating the differences in birds expected and found.

Different habitats may include:

Discord? What about it!
This page was last edited on 13 April 2021, at 19:12.
This is an official site of the North American Division Youth & Young Adult Ministries of the Seventh-day Adventist Church.
9705 Patuxent Woods Dr
Columbia, MD 21046