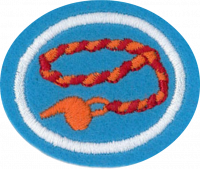 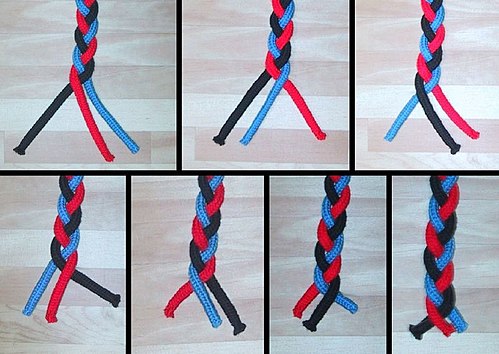 To make a three strand braid we start with the picture on the upper left, and proceed clockwise.

Make a zipper pull or a key chain using the four-strand round or square braid. 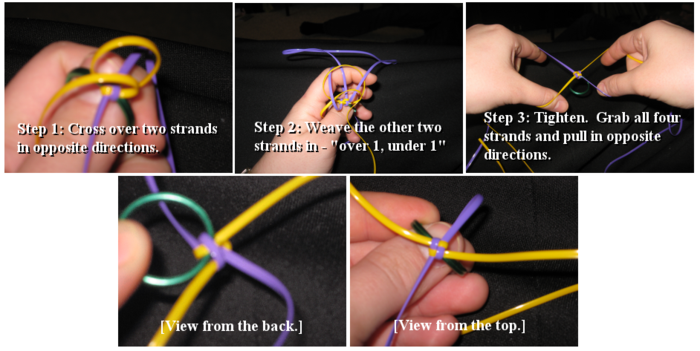 How to get started on a four-strand round or square braid.

This is an easy project that does not take very much time. To start, you will need: a keyring or other ring/fastener, and two strands of gimp (flat, plastic string), each strand about 3-4 feet long.

Fold each strand in half and thread through the ring/fastener. Then begin braiding.

Repeat until the zipper pull or key chain reaches the desired length (4-5 inches). 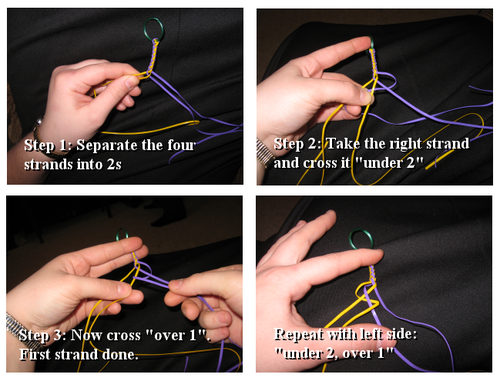 How to braid using four strands. 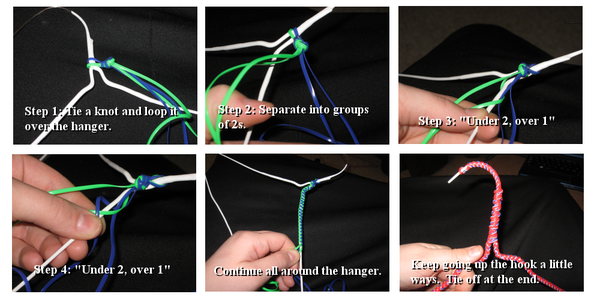 How to do a four-strand braid around a hanger.

First, you must learn to do the four strand braid, sometimes called the lanyard braid (not the round or square braid). The way to remember this is "under 2, over 1." Follow the illustration.

To make a hanger cover, just do this braid around the hanger.

Make a four-strand round braid lanyard. 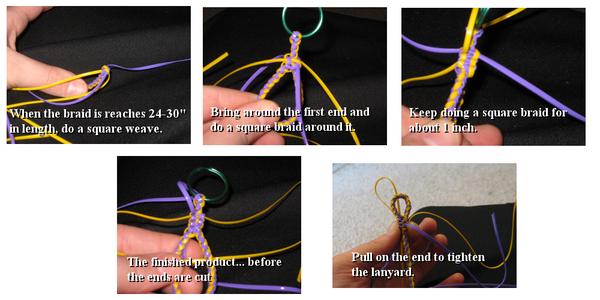 How to make an adjustable lanyard with a four-strand braid.

Follow the instructions for a four-strand braid from requirement 3 above, starting with two 8-9 foot strands folded in half. At the end, start doing a square braid around the first part, forming a loop. This can be adjusted when you are done.

Know how to start and end all projects.

How to start or end depends on the material being braided.

Rope, string, or lace
Lay the ropes (or strings or laces) parallel to one another with the ends even and tie an overhand knot in the entire bundle.

Hair
Bind the hair you wish to braid using an elastic band near the head. Divide into the desired number of equal-diameter strands.
Leather
A wide leather strap can be cut into strips, but left intact near one end.

Rope, string, or lace
Tie the bundle into an overhand knot.
Hair
Bind the braid with a rubber band or a decorative hair elastic.
Leather
Glue the strands in place, rivet them to another piece, or firmly sandwich them between two other pieces of leather.

Discord? What about it!
This page was last edited on 13 July 2022, at 22:02.
This is an official site of the North American Division Youth & Young Adult Ministries of the Seventh-day Adventist Church.
9705 Patuxent Woods Dr
Columbia, MD 21046