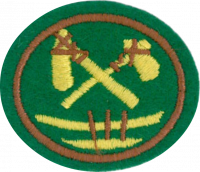 What trees in your area are used for building canoes? Name them in your language. Are they considered softwoods or hardwoods?

In the Pacific Islands, dugout canoes are very large, made from whole mature trees and fitted with outriggers for increased stability in the ocean, and were once used for long-distance travel. Such are the very large waka used by Māori who ventured to New Zealand many centuries ago. Such vessels carried 40 to 80 warriors in sheltered waters or smaller numbers thousands of miles across the Pacific ocean. In Hawaii, canoes are traditionally manufactured from the trunk of the koa (Acacia koa) tree. They typically carry a crew of six: one steersman and five paddlers.

In Africa, African Teak is the timber favored for their construction, though this comprises a number of different species, and is in short supply in some areas.

In the Pacific Northwest (US and Canada) cedar trees were used to make canoes.

What trees are used for building canoes, softwoods or hardwoods?

Canoes are made from both, depending on the regional preferences.

Trees belonging to the genus Acacia are used in both the South Pacific and in Africa. Acacias are hardwoods. Canoes were made in the Pacific Northwest of North America from Douglas fir, which is a softwood. In eastern North America, dugouts were made from chestnut, tulip tree (both hardwoods), or pine (a softwood). In Venezuela, the Ye'kwana make canoes from Spanish Cedar (Cedrela odorata) which is another softwood.

What tools are used for building canoes? Start with felling the tree up to completion.

Choose a good canoe tree about four meters in length and observe the correct felling of it. Explain what happened.

The Wampanoag (a Native American tribe) felled canoe trees by packing mud around the trunk and building a fire around the base. The mud would prevent the upper portion of the trunk from burning while the lower portion was consumed. Eventually, the tree would fall.

Other cultures simply cut the tree down with an ax. In doing this, care must be taken to control the direction in which the tree falls when it comes down. This is done by cutting a notch on the side corresponding to the direction of fall. This notch should be cut until it is just over half way through the trunk. Then another notch is cut on the other side, but higher than the first.

Describe how a log is prepared to build a canoe.

First the log is cut to the desired length and the bark is removed from the exterior.

In South America, the bulk of the hollowing of the trunk is done right where the tree falls. It is turned in place until the portion of the trunk that will become the keel is on the ground, and then rocks, dirt, and other debris are packed around the trunk to keep it from rolling. The tree is then mostly hollowed out with adzes. This is done to reduce the weight of the log before an attempt is made to drag it out of the jungle.

With the help of others properly shape the outside of the canoe and hollow out the inside. Correctly smooth both surfaces inside and outside. 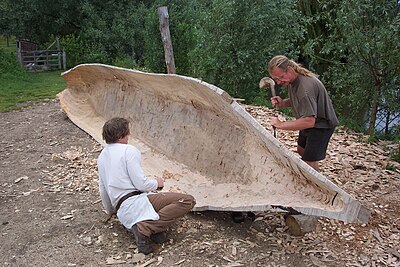 Before the appearance of metal tools, dugouts were hollowed-out using controlled fires. The burnt wood was then removed using an adze. Another method using tools is to chop out parallel notches across the interior span of the wood, then split out and remove the wood from between the notches. Once hollowed out, the interior is dressed and smoothed out with a knife or adze.

The ends are tapered to reduce drag in the water.

To shape the hull so that it has an even thickness, bore several small, evenly spaced holes in the hull. These are then plugged with pegs, the length of which equals the desired thickness of the hull. The pegs are inserted from the outside until they are flush with the surface of the hull. The inside is then hollowed until the ends of the pegs are reached. When the boat is placed in the water, the pegs will swell and the holes will be water-tight.

As the hull becomes thin, the canoe is inverted over a fire to heat the wood, making it more pliable. The gunwales are then spread apart, greatly increasing the interior room in the craft. Spacers are then placed over the gunwales to hold them apart as the log cools, and the boat retains this shape.

Assist in the making of paddles, seats, poles and fittings for the canoe.

Paddles are typically carved from long wooden poles. The blade is made wide and thin, tapering out at the edges. The shaft is rounded, and is thicker than the blade to give it extra strength. The grip will be another wide, flat section and is parallel to the blade and fitted to the user's hand.

When making a paddle, the craftsman will be trading strength for weight, and this is a delicate balance to strike. If the paddle is too heavy, it will easily and unnecessarily tire its user. But if it is too light, it will lose strength and may break when stressed. Usually a paddle is stressed at the most inopportune times - they experience very little stress in calm, flat water when it wouldn't be much of a problem if it broke.

The poles, like the paddles trade weight for strength. They are typically the same (or nearly the same) diameter from top to bottom. The length depends on the depth of the water in which they are used. Poles are used from a standing position, and the length reflects this.

Assist in the construction of decking, outrigger, mast and sail if the canoe is of a double hull or outrigger type.

Not all dugouts were outfitted with decks, but when present, decking is placed at both ends of the canoe to keep breaking waves from filling the boat. They help the boat to shed water. Decks are flat pieces of wood connected to the edges of the canoe and can be lashed in place by boring holes in both the hull (near the upper edge) and the deck. Once the deck has been lashed in place, the holes are sealed with pitch.

Outriggers of New Zealand consist of three parts: a pair of booms, connecting pegs, and a float. One boom is lashed to the canoe near the bow, and the other is lashed near the stern. Holes are bored into the hull directly below the booms so that cordage can be passed through them when lashing.

Each boom receives long pegs which are then connected to the float. The length of the pegs is adjusted so that the float will be positioned at the surface of the water. The pegs are lashed both to the booms and to the float. When lashing the pegs to the floats, a hole is bored through the float and the cordage is passed through it. This prevents the lashing from being positioned at the bottom of the float where it would be subjected to extreme wear and tear as the canoe is dragged across rocks and up onto beaches.

The float is typically pointed at the bow end and square at the stern.

If a canoe is outfitted with a mast and sail, it should also have outriggers. Otherwise, it can easily be toppled by the wind.

The mast is roughly 4 meters

long and tapers from 28 mm

at the bottom. It is inserted into a hole in the seat, and then into a socket cut into the bottom of the boat to receive it.

Boom shoulders. The right side is the mast-end.

A few inches above the seat it is fastened to a boom. The boom is the same length and diameter as the mast. Shoulders are cut near both ends, with the mast-end having a deeper shoulder (see illustration).

The boom is simply tied to the mast, and the sail is tied to both the mast and the boom. The sail itself is triangular.

Make a tree model of the type of canoe used in your district.

Choose a soft wood and shape the model as closely as you can to match your canoe. People will often carve a scale model before beginning to shape the log. The model can then be used as a reference.

Discord? What about it!
This page was last edited on 25 July 2022, at 17:43.
This is an official site of the North American Division Youth & Young Adult Ministries of the Seventh-day Adventist Church.
9705 Patuxent Woods Dr
Columbia, MD 21046