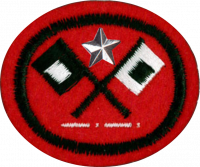 1922 Chart of the Morse Code Letters and Numerals

Morse code is a method for transmitting information, using standardized sequences of short and long marks or pulses — commonly known as "dots" and "dashes" — for the letters, numerals and special characters of a message. Originally created for Samuel Morse's electric telegraph in the mid-1830s, it was also extensively used for early radio communication beginning in the 1890s. However, with the development of more advanced communications technologies, the widespread use of Morse code is now largely obsolete, apart from emergency use and other specialized purposes, including navigational radio beacons, and by CW (continuous wave) amateur radio operators. Morse code is the only digital modulation mode designed to be easily read by humans without a computer, making it appropriate for sending automated digital data in voice channels, as well as making it ideal for emergency signaling, such as by way of improvised energy sources that can be easily "keyed" such as by supplying and removing electric power (e.g. by switching a breaker on and off).

Morse code can be transmitted in a number of ways: originally as electrical pulses along a telegraph wire, but also as an audio tone, as a radio signal with short and long pulses or tones, or as a mechanical or visual signal (e.g. a flashing light). Because Morse code is transmitted using just two states — on and off — it was an early form of a digital code. International Morse code is composed of six elements:

Those learning Morse are often taught to send and understand letters and other symbols at their full target speed, that is with normal relative timing of the dots, dashes and spaces within each symbol for that speed. Exaggerated spaces between symbols and words are used to give 'thinking time', which can be reduced with practice and familiarity. This makes the sound 'shape' of the letters and symbols easier to learn. This teaching method is referred to as the Farnsworth method. Another popular teaching method is the Koch method, which uses the full target speed from the outset, but begins with just two characters. Once strings containing those two characters can be copied with 90% accuracy, an additional character is added, and so on until the full character set is mastered.

As with other lists mnemonics may be used as a memory aid. Here is a United States version based on the NATO phonetic alphabet.

Send and receive by semaphore code at the rate of 12 words per minute using semaphore flags. (Five-letter words, minimum of 20 words.)

The newer flag semaphore system uses two short poles with square flags, which a flagperson holds in different positions to signal letters of the alphabet and numbers. The flagperson holds one pole in each hand, and extends each arm in one of eight possible directions. Except for in the rest position, the flags cannot overlap. The flags are colored differently based on whether the signals are sent by sea or by land. At sea, the flags are colored red and yellow. While on land, they are red and white.

The following semaphore characters are presented as one would face the signalman (in other words, pretend you can see the signalman's face in the illustrations). The letters almost follow a perfect, regular pattern, but don't be fooled by the first several. J, V, and Y break the pattern. We present them here in alphabetical order, and then again by position in a series of circles.

When you are first learning semaphores, a good Bible text to practice with is Philippians 4:8, as it repeats the phrase "whatever is" six times. Since it is so repetitive, You should be able to quickly signal the "whatever is" portion to get your speed up. This verse contains all the letters of the alphabet except j, q, and z which can be learned afterwards.

Learn some landmark letters first and commit them to memory. Groups of related letters are a good choice. For example, these three make straight lines:

These four are made by holding the flags 90° to one another, but all are at 45° to the signaler:

These four are made by holding the flags 45° apart:

Most of these are fairly common letters (except for X), so knowing them will allow you to spell the better part of most words. Add an A and an S to the mix:

and you can spell a quick sentence:

Send and receive by International Morse Code at the rate of eight words per minute using wigwag flags. (Five-letter words, minimum of 20 words.)

In order to send Morse Code via wigwag flag, one must obviously first learn Morse Code. See section a for details. Second, one must know how to transmit dots and dashes with the wigwag flags. The sender holds two flags, one in each hand. The "rest" position is both flags straight up. To send a dot, the flag on the right is lowered straight out to the right and then raised again. To send a dash, the left flag is lowered straight out to the left and then raised again.

Note that the US Army use of Wigwag does not use Morse Code but rather a single flag moved between positions 1, 2 and 3. Each letter is represented by a series of numbers.

The oldest flag system associated with the US Army Signal Corps is called Wig-wag. The name reflects the concept of back and forth movement as a means of signaling through motion. (PLEASE NOTE: Often this system has been misidentified as “Wig-wam.” A Wig-wam is a temporary arched framework structure overlaid with bark or hides to provide shelter used by Native Americans of the Algonquian language group.) Wig-wag is the signaling system developed for military field operations by Army surgeon Albert J. Myer prior to the Civil War. He developed this system based on a two element “tap-code” he created for the deaf. Myers’ Wig-wag system uses one flag for signaling. The position of the flags, left, right, front, represent the numerals 1, 2, 3 respectively and combinations of these numerals are used to convey the message.

The one-flag Wig-wag system used a cotton flag of two, four, or six feet square. The larger the flag, the greater distance it could be seen. The flag pole could be extended to a length of 16 feet using 4-foot segments joined with brass fittings. It took a strong soldier to wave a 16 foot pole with a 6-foot square flag on it for an hour or more, especially in wind, heat and probably under enemy fire. During night operations, the flag was replaced with a specially designed kerosene fueled torch, but employed exactly as the flag would be during daytime. During daytime operations, different sizes and colors of flags were employed based upon atmospheric conditions, such as clouds, haze, blue sky, etc. The signal soldier had these varieties of flags as part of their kit, but at any one time, only one flag or torch was used for signaling.

The Myer Wig-wag system and associated codes were used by both Union and Confederate armies during the Civil War. The Union Navy also employed this system and it served as the first Joint Signal Code between the Army and Navy until the end of the nineteenth century.

Discord? What about it!
This page was last edited on 19 October 2021, at 23:50.
This is an official site of the North American Division Youth & Young Adult Ministries of the Seventh-day Adventist Church.
9705 Patuxent Woods Dr
Columbia, MD 21046