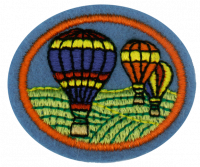 1. State the role each of the following played in the development of flying balloons.

2. Cite the principle of Archimedes, and briefly describe how it applies to each of the following:

a. A piece of cork floating in a bowl of water

b. A ship floating in the ocean

c. A hot air balloon floating in the atmosphere

3. Using a textbook of Chemistry, or a reference book of scientific tables, draw up a simple table showing the composition of air by weight and by volume.

4. Draw up a simple table showing a comparison of the atomic number, atomic weight, and density of hydrogen, helium, nitrogen, and oxygen.

6. Explain how heat/temperature affect the density of air, and how this applies to flying hot air balloons.

7. Explain the role of each of the following in the structure and flying of a hot air balloon:

8. Name two materials that may be used for the envelope of a hot air balloon, and compare the advantages each accords because of its properties.

9. Describe how flying balloons have served a useful function in

10. At what time of the day do most sport balloon flights take place? Why?

11. Describe how a pilot controls the vertical movement of

a. A hot air balloon

b. A gas filled balloon

12. Describe how a pilot controls the lateral or horizontal movement of a flying balloon.

13. Build to completion one model hot air balloon (or two if working in pairs).

14. Successfully launch, fly, and recover the model hot air balloon(s) which you have built.

Discord? What about it!
This page was last edited on 21 July 2022, at 18:05.
This is an official site of the North American Division Youth & Young Adult Ministries of the Seventh-day Adventist Church.
9705 Patuxent Woods Dr
Columbia, MD 21046