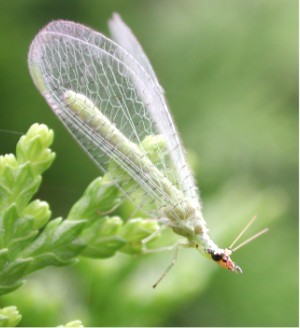 Description: The insect order Neuroptera, or net-winged insects, includes the lacewings, mantidflies, antlions, and their relatives. The adults of this order possess four membranous wings, with the forewings and hindwings about the same size, and with many veins. They have chewing mouthparts, and undergo complete metamorphosis. The larvae of most families are predators. Many chrysopids eat aphids and other pest insects, and have been used for biological control (either from commercial distributors but also abundant and widespread in nature). Larvae in various families cover themselves in debris (sometimes including dead prey insects) as camouflage, taken to an extreme in the ant lions, which bury themselves completely out of sight and ambush prey from "pits" in the soil. Larvae of some Ithonidae are root feeders, and larvae of Sisyridae are aquatic, and feed on freshwater sponges. A few mantispids are parasites of spider egg sacs. As in other orders, there is a pupal stage, generally enclosed in some form of cocoon composed of silk and soil or other debris. Adults of many groups are also predatory, but some do not feed, or consume only nectar.

Discord? What about it!
This page was last edited on 8 September 2021, at 15:36.
This is an official site of the North American Division Youth & Young Adult Ministries of the Seventh-day Adventist Church.
9705 Patuxent Woods Dr
Columbia, MD 21046