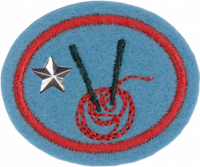 Have the Knitting honor.

For tips and instruction see Knitting.

Knit a gauge swatch with the yarn of your choice and the needles recommended on the yarn label as follows:

Block your swatch and measure your gauge. Does it match the recommended gauge on the yarn label? If it does not, how do you adjust?

Why is it important that your gauge matches a pattern in making clothing?

What is colorwork? Make one item that uses: Intarsia, Stranded colorwork or Fair Isle. 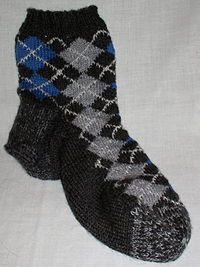 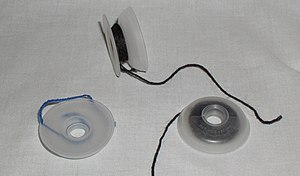 Intarsia is a knitting technique used to create patterns with multiple colors. As with the woodworking technique of the same name, fields of different colors and materials appear to be inlaid in one another, but are in fact all separate pieces, fit together like a jigsaw puzzle.

Unlike other multicolor techniques, there is only one "active" color on any given stitch, and yarn is not carried across the back of the work; when a color changes on a given row, the old yarn is left hanging. This means that any intarsia piece is topologically several disjoint columns of color; a simple blue circle on a white background involves one column of blue and two of white---one for the left and one for the right. Intarsia is most often worked flat, rather than in the round. However, it is possible to knit intarsia in circular knitting using particular techniques.

Common examples of intarsia include sweaters with large, solid-color features like fruits, flowers, or geometric shapes. Argyle socks and sweaters are normally done in intarsia, although the thin diagonal lines are often overlaid in a later step, using Swiss darning or sometimes just a simple backstitch.

Knitting in intarsia theoretically requires no additional skills beyond being generally comfortable with the basic knit and purl stitches. Materials required include multiple colors of yarn, standard needles, and bobbins. Bobbins serve to contain the inactive yarn and help keep it from getting tangled. Unlike the narrow, wooden ones used to make bobbin lace, modern intarsia bobbins resemble translucent plastic yo-yos that can snap tight to prevent the yarn from unwinding.

After winding a few yards of each color onto its own bobbin (and possibly several bobbins' worth of some colors), the knitter simply begins knitting their pattern. When they arrive at a point where the color changes, the knitter brings the new color up underneath the old one (to prevent holes) and starts knitting with it. If flat knitting, at the end of the row, the piece is turned round just as with regular knitting, and the knitter returns back the way they came.

The simplest intarsia pattern is for straight vertical stripes. After the first row, the pattern is continued by always working each stitch in the same color as the previous row, changing colors at exactly the same point in each row. To make more elaborate patterns, one can let this color boundary drift from row to row, changing colors a few stitches earlier or later each time.

There are several techniques to execute intarsia when circular knitting. Executing intarsia "in-the-round" eliminates the need for seams and, in one case, turning the piece and working from the wrong side.

What are cables? Make one item that uses cables.

Knit one of the following in the round using double pointed needles or circular needles (magic loop): Mittens, socks, fingerless gloves, wrist warmers, hat brim up with decreases.

There are plenty of free patterns at Ravelry and Lion Brand

Knit a sweater that fits you or another person.

Read Psalm 139 and discuss how it applies to the act of knitting.

Teach someone how to complete a basic knitting project.

Visit a nursing home or shut-in person and spend a good part of the day sharing and knitting with others.

Use knitting as a conversation starter to speak to someone about the gospel.

Discord? What about it!
This page was last edited on 10 March 2022, at 19:48.
This is an official site of the North American Division Youth & Young Adult Ministries of the Seventh-day Adventist Church.
9705 Patuxent Woods Dr
Columbia, MD 21046