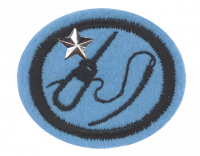 Have the Leather Craft honor.

Show how to punch holes, set snaps, do saddle stitching, and do two types of lacing. 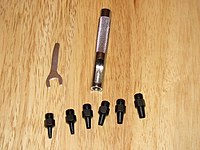 There are basically two types of leather punches: the rotary punch and the hollow punch.

Rotary punch
The rotary punch looks like a regular paper hole punch, except that it has a "spur" on the end allowing the user to select the size of the hole to be made. This type of punch should not be used when making holes for lacing or sewing. It is more suited to punching holes for a belt, a wrist band, or a snap.
Hollow punch
A hollow punch looks a bit like a small pipe with a sharpened end. The sharpened end is held against the leather and the other end is then struck with a mallet. The leather should be backed by a piece of soft wood. A small leather disc is removed from the piece and goes up into the punch. The punch usually features a slot in the side so that these discs can be removed.

Before a snap can be set, a hole must be punched in the two pieces of leather to be joined by the snaps, and located wherever the snaps shall be. It is best to punch both pieces at the same time so that the holes (and thus the two parts of the snap) will line up. Choose a punch that will make a hole which will provide a snug fit for the snap.

Once the holes are punched, insert the finished half of the snap into the hole which will be most visible on the finished piece.

Setting the hidden half of the snap is done in the same way. 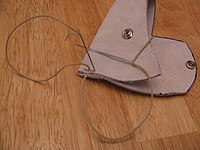 Running stitch
The running stitch is the simplest type of lacing. Begin by tying an overhand knot in one end. Lay the two pieces of leather to be joined together and punch a row of holes through both thicknesses. Pass the end of the lace through the holes from bottom to top. Pull it tight until the knot meets the hole. Then pass the lace through the next hole from top-to-bottom. The third stitch goes from bottom-to-top, the fourth from top-to-bottom, etc.

Whip Stitch
Punch a row of holes through two pieces of leather as with the running stitch. Tie a knot in one end of the lacing and pass the other through the first hole, from bottom-to-top. In a whip stitch, all the lacing passes through from the bottom to the top. The lace wraps around the edge of the pieces to get from the bottom to the top. This makes the same pattern the piece of wire in a spiral notebook makes.

Cross whip stitch
The cross whip stitch is made like the whip stitch, but the lace passes through every other hole. A second piece of lace does the same thing, but through the holes skipped by the first length of lace.

Make a sheath for a hatchet, knife, or ax.

Follow the same procedure for making an ax sheath as for a hatchet sheath. These instructions custom fit the sheath to the ax or hatchet head.

Cut out the leather
As with the hatchet/ax sheath, you could lay out a pattern on a paper bag and trace it first. Cut it out and fold it around the knife to test for a good fit. Leave a quarter inch around the perimeter of the blade to accommodate rivets. If satisfied with the results, use that to cut out a piece of leather. If you are not satisfied with the result, you've only lost a paper bag and a little time, so you can do it again. Once you have a pattern you like, trace it onto a piece of leather with a pencil and then cut it out. Use a thick piece of leather for this. A thin piece will be floppy and not hold up well.
Make a strap to hold the handle
A knife sheath typically has a strap near the top to hold the handle against the sheath. Without this piece, the knife tends to flop about and may even fall out of the sheath when the wearer bends over. This strap should be a little wider than the snaps you plan to use and long enough to wrap around the knife handle at the point where it will be fastened to the sheath. Most (perhaps all) knife handles have a different girth at different points along their length. It's better to make the strap a little too loose than it is to make it a little too tight.
Punch holes
Punch a hole in the center of the strap. Then fold the top of the sheath over on itself to form a loop through which a belt can be slipped. Punch a hole through both thicknesses near the top (make sure you know where you want the strap before punching these holes). Lay the strap on the sheath and then place the knife on top of it, positioned where you want it. Then wrap the strap around the handle and mark it for the snaps. Punch holes for the snaps.
Saddle stitch the belt loop
Fold the top of the sheath over on itself and saddle stitch it across the width of the sheath.
Set the snaps
Set the snaps following the instructions given above for the hatchet sheath.
Rivet the strap in place
Rivet the strap to the sheath. You can buy rivets, or if you feel adventurous (or cash-strapped), you can make your own rivets from nails. To make a rivet from a nail, cut the nail so that it is a little longer than the thickness of the leather (all layers) through which it will pass. The nail should poke out from the leather by an amount equal to half the diameter of the nail shank. Put the nail in place and lay it on an anvil (or on a sledge hammer or on a bench vice's table) with the nail head down. Using the flat face of a ball peen hammer, tap on the cut end of the nail. Then begin tapping on the cut end holding the hammer face at an angle, going all around the edges. Finally, flip the hammer over and use the rounded end (the ball peen) and repeat the process. The end of the nail should mushroom over and flatten out. You can shape the mushroomed portion into a dome with practice.
Rivet the sheath closed
Use brass or copper rivets for the sheath. If making your own rivets, use brass or copper nails. Brass and copper are softer than steel, so when the knife blade slides into the sheath and hits the brass or copper rivets, it will not dull the blade as steel rivets would. If you do not rivet the sheath, but merely stitch it closed, the knife may eventually cut through the stitches. Use five evenly-spaced rivets to hold the sheath closed, with the fifth rivet near the tip of the sheath.
Stitch between the rivets
Stitch the sheath to keep it from gapping open between the rivets. Locate the stitches closer to the edge of the sheath than the rivets. That way the rivets can protect the stitching from the knife blade.

Complete a figure-carved belt, doing your own tooling.

The amount of leather you will need for this will depend on the waist-size of the intended recipient of the belt. The width should be roughly 2.5cm

, but some variability here is OK - just make sure it will fit through the belt loops.

of this excess will be allowed for the end that goes through the buckle, and the remainder will be for the end that attaches permanently to the buckle. Once the belt has been cut out, you can tool it using the standard means. It is not necessary (or even desired sometimes) to tool the entire length of the belt.

When tooling has been completed, the belt can be dyed. Finally, the holes should be punched and the buckle attached.

If you prefer, you could make a guitar strap instead.

From your own design, cut from leather, tool, punch, and lace a project such as a case, purse, bag, or an equivalent.

There are many items you use in everyday life and as a Pathfinder that can benefit from having a carrying case. Here are a few such things:

You may prefer to make a garment or accessory:

Show six leather items you have made.

You should already have made:

You will therefore only need to make two more items to meet this requirement. You can make items of your own design, or make items that someone else has already designed, or one of each. It's up to you.

Discord? What about it!
This page was last edited on 14 July 2022, at 15:52.
This is an official site of the North American Division Youth & Young Adult Ministries of the Seventh-day Adventist Church.
9705 Patuxent Woods Dr
Columbia, MD 21046