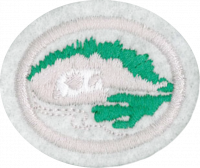 1. Know the life cycle of a moss, lichen, or liverwort.

3. Name at least two ways lichens have been of value to man.

4. How are liverworts different than all other green plants? Name one used in aquariums. What is its function?

5. Describe at least three significant ways moss has played in the economy of man.

7. Find and identify five lichens, one liverwort, and six mosses.

8. Observe the spore caps of several different kinds of moss under a magnifier to see the differences in "hair caps" and "teeth" that separate many species.

Discord? What about it!
This page was last edited on 4 January 2023, at 02:38.
This is an official site of the North American Division Youth & Young Adult Ministries of the Seventh-day Adventist Church.
9705 Patuxent Woods Dr
Columbia, MD 21046