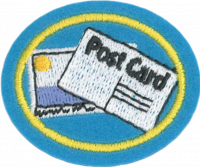 1. Relate briefly the story of the beginning of the postcards in your country.

2. How was your country’s postal system affected by the coming of postcards?

3. What are the mailing rates for postcards and letters in your country?

4. What is the term used in your country for postcards collecting?

5. Give a brief description of each of the following eras of postcards:

6. Briefly describe each type of postcards.

7. Show and label a picture of a postcard from each of the above eras.

8. Have some knowledge of preserving postcards.

9. Make a collection of at least 50 postcards. (No two postcards alike.) Your collection MUST include the following:

a. Begin your arrangement with a postcard of a religious nature.

b. Postcards from at least 10 states/provinces/countries.

c. Postcards from at least 2 other countries not your own

10. Arrange the collection of postcards in a suitable display and display at a Pathfinder event.

Discord? What about it!
This page was last edited on 21 July 2022, at 21:56.
This is an official site of the North American Division Youth & Young Adult Ministries of the Seventh-day Adventist Church.
9705 Patuxent Woods Dr
Columbia, MD 21046