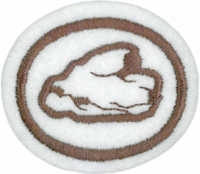 Distinguish between rocks and minerals.

A mineral is a naturally occurring, inorganic solid with a definite chemical composition and a crystalline structure formed by geological processes. A rock is an aggregate of one or more minerals. (A rock may also include organic remains and mineraloids.) Some rocks are predominantly composed of just one mineral. For example, limestone is a sedimentary rock composed almost entirely of the mineral calcite. Other rocks contain many minerals, and the specific minerals in a rock can vary widely. Some minerals, like quartz, mica or feldspar are common, while others have been found in only one or two locations worldwide.

Have a collection of at least fifteen specimens correctly named. Label each specimen with collector's name, date, and locality in which it was found.

Identifying rocks and minerals is best done with a Field Guide. The following properties are very useful for identification purposes:

These are described in detail in requirements 4 and 5.

You will need a few tools for measuring various aspects of rocks. Not all of them are required, but the more of them that are available to you, the more successful you will be in identifying specimens.

Define and name two examples each (from specimens or pictures) of:

Igneous
Igneous rock is formed when lava cools and solidifies.

Sedimentary
Sedimentary rock is formed when sediments carried by wind or water settle and turn to stone.

Metamorphic
Metamorphic rock is formed when another type of rock is transformed by great heat and pressure.

What is meant by Mohs' scale of hardness? Name the minerals in order in Mohs' scale.

On the Mohs scale, fingernail has hardness 2.5; copper penny, about 3.5; a knife blade, 5.5; window glass, 6.5; steel file, 6.5. Using these ordinary materials of known hardness can be a simple way to approximate the position of a mineral on the scale.

One mnemonic traditionally taught to geology students to remember this table is "To Get Candy From Aunt Fanny, Quit Teasing Cousin Danny".

An alternative table is shown below which has been modified to incorporate additional substances that may fall in between two levels.

The terms that follow have specific meaning in mineralogy, and are useful for identifying the type of a specimen of rock or mineral. To the uneducated eye, a rock is a rock is a rock. But if the following terms are understood, noted, and cross-checked against known values for various specimens, a positive identification can be made. 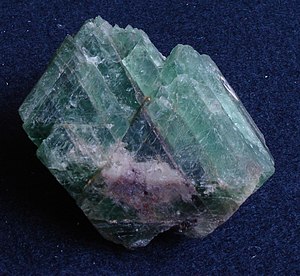 Cleavage is the tendency of crystalline materials to split along definite planes, creating smooth surfaces, of which there are several named types:

Cleavage is of technical importance in the electronics industry and in the cutting of gemstones. While precious stones are generally cleaved by impact, man-made single crystals of semiconductor materials are generally sold as thin wafers which are much easier to cleave. Simply pressing a silicon wafer against a soft surface and scratching its edge with a diamond scribe is usually enough to cause cleavage.

A cubic centimeter of diamond would weigh 3.52 grams, so we can calculate the density of diamond as:

Finally, we can calculate the specific gravity (G) of diamond:

Division by 1 is a lovely thing!

But what use is specific gravity? It helps us identify a mineral. We can measure a sample's specific gravity and compare it to the specific gravities of known specimens. To do this, we will need to make two measurements: the weight of the specimen, and its volume. Weight is easy (assuming you have a scale or a balance that can measure grams), but how do you measure the volume of an irregularly shaped specimen? All you need is some water, a drop of dish soap, and a graduated cylinder marked in metric units (note that 1 milliliter equals 1 cubic centimeter). Put some water in the cylinder, adding enough until the level comes to a convenient, well-marked level (such as 100 ml). Add a drop of dish soap to break the surface tension (you won't need more than a tiny drop). Then drop the specimen into the water and note the new water level. Subtracting the new level from the old will give you the volume of the specimen. Now all you need to do is divide the weight in grams by the volume in milliliters.

Luster is a description of the way light interacts with the surface of a crystal, rock, or mineral. For example, a diamond is said to have an adamantine luster and pyrite is said to have a metallic luster.

Color indicates the appearance of the mineral in reflected light (for opaque specimens) or transmitted light (for translucent specimens). In other words, it means just what you would think it means - what it looks like to the naked eye. Before noting the color of a specimen, it is important to clean it off.

The streak (also called powder color) of a mineral is the color of the powder produced when it is dragged across an unweathered surface. Unlike the apparent color of a mineral, which for most minerals can vary considerably, the trail of finely ground powder generally has a more consistent characteristic color, and is thus an important diagnostic tool in mineral identification. If no streak seems to be made, the mineral's streak is said to be white or colorless. Streak is particularly important as a diagnostic for opaque and colored materials. It is less useful for silicates, most of which have a white streak and are too hard to powder easily.

The apparent color can vary widely because of trace impurities or a disturbed macroscopic crystal structure. Small amounts of an impurity that strongly absorbs a particular wavelength can radically change the wavelengths of light that are reflected by the specimen, and thus change the apparent color. However, when the specimen is dragged to produce a streak, it is broken into randomly oriented microscopic crystals, and small impurities do not greatly affect the absorption of light.

The surface across which the mineral is dragged is called a "streak plate," and is generally made of unglazed porcelain tile. In the absence of a streak plate, the underside of a porcelain bowl or vase, the surface of an electrical fuse, or the back of a glazed tile will work. Sometimes a streak is more easily or accurately described by comparing it with the "streak" made by another streak plate.

Because the trail left behind results from the mineral being crushed into powder, a streak can only be made of minerals softer than the streak plate, around 7 on the Mohs scale of mineral hardness. In this case, the color of the powder can be determined by filing or crushing with a hammer a small sample, which is then usually rubbed on a streak plate. Most minerals that are harder have an unhelpful white streak.

Some minerals leave a streak similar to their natural color, such as cinnabar and azurite. Other minerals leave surprising colors, such as fluorite, which always has a white streak, although it can appear in purple, blue, yellow, or green crystals. Hematite, which is black in appearance, leaves a red streak which accounts for its name, which comes from the Greek word "haima," meaning "blood." Galena, which can be similar in appearance to hematite, is easily distinguished by its gray streak.

Texture in geology refers to the physical appearance or character of a rock, such as grain size, shape, and arrangement, both to the naked eye and under a microscope. 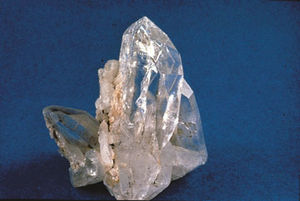 A crystal is a solid whose atoms, molecules, or ions are packed in a regularly ordered, repeating pattern extending in all three spatial dimensions. Snowflakes, diamonds, and common salt are common examples of crystals.

Tell of four Bible incidents in which a rock was significant.

Exodus 24:16-18
God carves the ten commandments in stone.
Numbers 20:2-13
God commands Moses to speak to the rock to provide water for the Israelites but Moses hits it instead.
1 Samuel 17
David kills Goliath with a stone.
Daniel 2:34
A stone is cut without hands and destroys the image in Nebuchadnezzar's dream.
John 11:38-44
Jesus orders that the stone covering the tomb of Lazarus be removed.
Matthew 7:24-29
The parable of the wise and foolish builders.
Acts 6-7
The stoning of Stephen.

What are the foundation stones of the New Jerusalem?

Revelation 21:19,20 describes the foundation stones of the New Jerusalem.