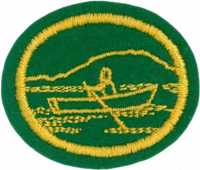 Have the Intermediate Swimming honor.

With your instructor or counselor in stern, and without assistance, row properly the following:

A quarter of a mile on a straight course, stop, make a pivot turn, and return to the starting point.

Back water in a straight line 200 yards (182.9 meters). Make a turn under way, still backing water, and return to the starting point. (Feather after each stroke. Pin rowlocks must not be used.)

Properly launch and land a rowboat from and to shore.

Safely assist a person to and from a rowboat alongside a pier.

Tie a rowboat to a pier using each of the following: 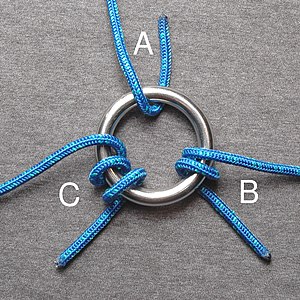 Alone, or with the assistance of a person who is a swimmer, swamp rowboat, turn it right side up, get in, and with your hands or an oar, paddle it for 30 feet (9.1 meters). Tell why you should hang onto or get into a swamped rowboat.

Shove off from shore or pier alone in a rowboat, approach a swimmer, and maneu­ver so that the swimmer can be safely towed ashore.

Strictly speaking, the only true defining characteristic of the dory is that it is planked up with wide boards, "It should be well understood, that it is the dory's special mode of construction, not its hull shape, that sets it, and its related sub-types apart from other boats"

More generally speaking, the dory can be defined as a small boat which has:

The hullform is characterized by a bottom that is transversely flat and sometimes bowed fore-and-aft. (This curvature is known as 'rocker'.) The stern is frequently a raked surface (a narrow transom) that tapers sharply toward the bottom forming a nearly double-ended boat. The traditional bottom is made from planks laid fore and aft and not transverse, although some hulls have a second set of planks laid over the first in a pattern that is crosswise to the main hull for additional wear and strength.

Despite their simplicity of design, dories are well known for their seaworthiness and rowing ease. Because of their narrow bottoms, they do not exhibit much initial stability and have often been called 'tippy'. They exhibit high ultimate stability, however, tipping to a point and then stiffening up significantly and resisting further rolling tendencies. Dories by design are quite voluminous and can carry a heavy load for their size and will continue to retain their great ultimate stability even when heavily loaded.

A dory is a small, shallow-draft boat of approximately 5 to 7 m

in length. Lightweight and versatile, these boats are used in the open sea for commercial fishing applications, as well as in whitewater rafting on interior rivers. McKenzie River dory versions usually seat from two to four people including the oarsman.

The "dory skiff" is another variation of the dory type. For inshore work the transom was widened, freeboard was lowered and more rocker introduced into the bottom making an exceptionally easy-to-row boat that was more stable (initial stability not ultimate stability) than their offshore cousins. However they are not as seaworthy as the Swampscott or Banks dories.

There are many types of Dory boats sometimes named after the towns they were designed and built in. The term skiff is used, and has been used, to refer to many various types of seemingly unrelated small boats.

One current usage of skiff is to refer to a typically small flat-bottomed open boat with a pointed bow and a flat stern originally developed as an inexpensive and easy to build boat for use by inshore fishermen. Originally designed to be powered by rowing, their form has developed so that they are efficiently powered by outboard motors. The design is still in common use today for both work and pleasure craft.

A dinghy is a type of small boat, often carried or towed by a larger vessel. The term can also refer to small racing yachts or recreational open sailing boats. Utility dinghies are usually rowboats or have an outboard motor, but some are rigged for sailing. Because the smaller sailing dinghy responds more quickly to maneuvers, it is more suitable for beginner training in sailing than full-sized sloops.

Dinghies usually range in length from 2 to 6 meters. Larger auxiliary vessels are generally called tenders, pinnaces or lifeboats. Folding and take-down multi-piece (nesting) dinghies are used where space is limited. Some newer dinghies have much greater buoyancy, giving them more carrying capacity than older boats of the same size.

A punt is a flat-bottomed boat with a square-cut bow, designed for use in small rivers or other shallow water. Punting refers to boating in a punt. The punter generally propels the punt by pushing against the river bed with a pole.

Punts were originally built as cargo boats or platforms for fowling and angling but in modern times their use is almost exclusively confined to pleasure trips on the rivers in the university towns of Oxford and Cambridge in England and races at a few summer regattas on the Thames.

A pram is a small utility boat with a squarish rather than pointed bow. This type of pram provides a more efficient use of space than does a traditional skiff of the same size.

A rowlock (British, pronounced /ˈrɒlək/) or oarlock (US) is a brace that attaches an oar to a boat. When a boat is rowed, the rowlock acts as a fulcrum, and, in doing so, the propulsive force that the rower exerts on the water with the oar is transferred to the boat by the thrust force exerted on the rowlock.

Originally rowlocks were two wooden posts that the shaft of the oar nestled between.

thole pin, a wooden pin fixed in the gunwale of a rowing boat to which, by means of a grommet, an oar is held when it is being pulled. A more usual method is to use two thole pins close together, with the oar between them.

Pin locks are not recommended because the oar could pop out and if the rower lets go could drift away. So having a ring lock or a clamp on top of a u lock would make rowing safer.

What is the advantage of feathering oars while rowing?

There is less wind resistance (drag). This increases your speed and increases your endurance. It will also reduce the likelihood of catching a crab in rough conditions (that is, catching the blade on the surface of the water as you try to bring it forward for the next stroke).

How would you handle a rowboat in a sudden storm or high wind?

How would you calculate the weight that can be safely carried under normal con­ditions in any given boat under oars?

What lights are required on a rowboat at night, both with and without outboard motor?

Know how to properly fit out a rowboat, and maintain and care for it during the boating season. Know how to prepare and store the rowboat when not in use.

Discord? What about it!
This page was last edited on 14 July 2022, at 19:02.
This is an official site of the North American Division Youth & Young Adult Ministries of the Seventh-day Adventist Church.
9705 Patuxent Woods Dr
Columbia, MD 21046