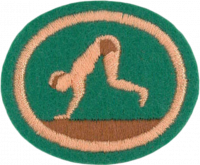 First, always assist the beginner through the exercise the first few times and gradually reduce the physical contact as he improves. The in­structor must guide the performer so that he will be sure to get the feeling of the whole performance from the beginning. Second, spotting is very much a matter of handling weights. Weights are always lifted with the big leg muscles, not with the arms or back. When a man lifts or catches a weight, he gets under it. In tum­bling, this means that the assistant or "spotter" must keep close to his man, get under his elbows in somersaults, and always be near enough to anticipate and prevent falls. Spotting at arm's length cannot be effective.

In a tuck a gymnast is bend at the hips and the knees. Sit on the floor with your legs in front of you. Bend your knees so that your knees are touching your chest and your feet are "tucked" in close to your body. A variation on the tuck is called a "cowboy" tuck in which the gymnast pulls their knees out to the side somewhat in order to compress the tuck further. This enables faster rotation.

In a pike a gymnast is bent only at the hips. Sit on the floor with your legs straight out in front of you. Pikes of varying degrees including where a gymnast is essentially folded in half at their hips are used in gymnastics.

In a layout a gymnast is not bent at the hips nor the legs. A layout is the term used for a rotating skill in which the gymnasts body is essentially straight. A layout can be performed either hollow or arched.

Basically like a tuck. I don't know why they put this in here...

In a straddle a gymnasts legs are separated with neither leg being forward or backward of the other. A straddled pike is a straddle in which the hips are closed or "piked" to some degree.

Perform the following individual stunts with form and poise:

Forward roll but not from a standing position.

Swedish fall is like a pike plank position and then just putting one leg up.

Make a triangle. The bottom two points are the hand's positions and the top point is for the head. This will help you balance. Many people put their hands and head in a straight line, but you can't balance like that. You'll fall over. Instead of kicking straight up, you are going to rest your knees against your elbows because your elbows will be bent.

Take the frogstand instructions and then go into headstand.

Make a triangle. The bottom two points are your hands and the top is your head. Kick up so that your feet are high in the air.

Kick up so that the hands are planted securely to the ground and the feet are up in there air.

Start in a lunge. Go Hand hand foot foot. So hands down first, the one closest to the ground first, then the other one, bring legs over and land.

Perform with form and poise any six of the following stunts with a partner:

Have the base go on hands and knees. The top will put one hand on the base's thigh and the other on the arm. They will lay their head over/on their back so their chin goes over their back and they will go into a handstand/headstand.

How to: 1. Two bases lunge in toward one another. Flyer stands behind them. 2. Flyer places her right foot on the right base's left thigh (in her pocket). Her hands should be on base's shoulders. 3. Flyer puts her weight on right foot and jumps off of left leg. She puts her left leg on the left base's right thigh. Flyer locks legs and puts her arms in high V. To Dismount: Flyer steps back to starting position

Have base lie back with legs bent. Have flyer straddle, putting their hands on the base's knees. Have the base put his hands on the fliers shoulders. Have the flyer go into a headstand/handstand position.

Hold onto the stunter's waist/ hips. The performer will jump up and over the base's head and become stiff to stay in a plank position.

Discord? What about it!
This page was last edited on 14 July 2022, at 21:11.
This is an official site of the North American Division Youth & Young Adult Ministries of the Seventh-day Adventist Church.
9705 Patuxent Woods Dr
Columbia, MD 21046