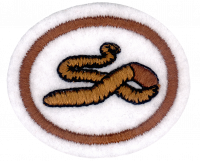 What is a worm?

A worm is an elongated soft-bodied invertebrate (boneless) animal. The best-known is the earthworm, but there are hundreds of thousands of different species that live in a wide variety of habitats other than soil.

Where do worms live?

Worms live in a variety of habitats, including in the soil, leaf litter, under rocks, in the water, and even inside the bodies of other animals.

What do worms eat?

Worms "eat" soil, which is to say that they swallow it, and as it passes through their bodies, nutrients are extracted from the organic materials found in the soil (such as dead leaves).

What kingdom are worms found in?

Worms are found in the Animal Kingdom.

Name the 3 major phyla (the next largest category of classification) that contain worms, and describe them.

The annelids are a large phylum of animals, comprising the segmented worms, with about 15,000 species including the well-known earthworms and leeches. They are found in most wet environments, and include many terrestrial, freshwater, and especially marine species, as well as some which are parasitic or mutualistic. They range in length from under a millimeter to over 3 meters (the seep tube worm Lamellibrachia luymesi).

The nematodes or roundworms are one of the most common phyla of animals, with over 20,000 different described species (over 15,000 are parasitic). They are found in great quantities in almost all freshwater, marine, and terrestrial environments, where they often outnumber other animals in both individual and species counts. They are found in locations as diverse as Antarctica and oceanic trenches. Further, there are a great many parasitic forms, causing disease in most plants and animals, humans included.

The flatworms are a phylum of relatively simple soft-bodied invertebrate animals. With about 25,000 known species they are found in marine, freshwater, and even damp terrestrial environments. Most are free-living forms, but many are parasitic on other animals.

The so-called Hammerhead Worm (below) is a terrestrial flatworm from the family Geoplanidae. 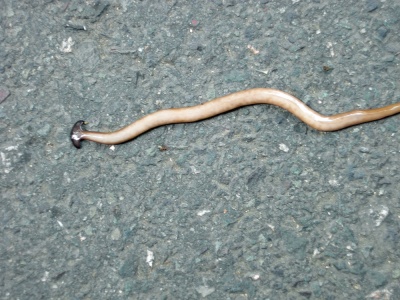 According to Wikipedia, worms belong to ten different phyla. The three most familiar are listed above, but for completeness, we mention the other seven here:

What do “free living” and “parasitic” mean?

A parasitic creature (that is, a parasite) is one that lives off another, usually larger creature (a host) for a prolonged period of time. The parasite gains benefit from the relationship while the host is harmed. The "prolonged" portion of this definition distinguishes the predator/prey relationship from the parasite/host relationship. It also excludes brief relationships such as a mosquito bite. Examples of parasites include leeches, tapeworms, and nematodes.

A free-living creature is any creature that is not a parasite.

Which phyla, mentioned in question 5, are free living or parasitic?

Answer the following questions about earthworms.

Where do they live?

Earthworms live all over the world except in polar and arid regions.

What do they eat?

Earthworms feed on organic matter found in the soil, such as leaf litter. They pass soil through the gut, extracting nutrients from it as it passes through their bodies.

How are they helpful to humans?

The major benefits of earthworm activities to soil fertility can be summarized as:

Biological
The earthworm is essential to composting; the process of converting dead organic matter into rich humus, a medium vital to the growth of healthy plants, and thus ensuring the continuance of the cycle of fertility. This is achieved by the worm's actions of pulling down below any organic matter deposited on the soil surface (e.g., leaf fall, manure, etc.) either for food or when it needs to plug its burrow. Once in the burrow, the worm will shred the leaf and partially digest it, then mingle it with the earth by saturating it with intestinal secretions. Worm casts (see below) can contain 40% more humus than the top 6" of soil in which the worm is living.

Chemical
As well as dead organic matter, the earthworm also ingests any other soil particles that are small enough—including stones up to 1/20 of an inch (1.25mm) across—into its 'crop' wherein minute fragments of grit grind everything into a fine paste which is then digested in the stomach. When the worm excretes this in the form of casts which are deposited on the surface or deeper in the soil, a perfectly balanced selection of minerals and plant nutrients is made available in an accessible form. Investigations in the US show that fresh earthworm casts are 5 times richer in available nitrogen, 7 times richer in available phosphates and 11 times richer in available potash than the surrounding upper 6 inches (150 mm) of soil. In conditions where there is plenty of available humus, the weight of casts produced may be greater than 4.5 kg (10 lb) per worm per year, in itself an indicator of why it pays the gardener or farmer to keep worm populations high.

Physical
By its burrowing actions, the earthworm is of great value in keeping the soil structure open, creating a multitude of channels which allow the processes of both aeration and drainage to occur. Permaculture co-founder Bill Mollison points out that by sliding in their tunnels, earthworms "act as an innumerable army of pistons pumping air in and out of the soils on a 24 hour cycle (more rapidly at night)" (Permaculture- A Designer's Manual, Tagari Press, 1988). Thus the earthworm not only creates passages for air and water to traverse, but is itself a vital component in the living biosystem that is healthy soil.

How short and how long do they get?

Earthworms range in size from two centimeters (less than one inch) to over three meters (almost ten feet) in the Giant Gippsland Earthworm.

How many are there in one square meter of soil?

How many species are there?

There are over 5,500 named species of earthworms worldwide.

The Clitellum is a thickened glandular section of the body wall that secretes a cocoon in which the eggs are deposited. Once the eggs have been deposited in the cocoon, the clitellum slides off of the earthworm's body.

Find an earthworm outside and do the following:

Be able to distinguish the following parts: Head end, Tail end, and clitelum.

Observe, and describe how it moves.

Earthworms travel by the means of waves of muscular contractions which alternately shorten and lengthen the body. The shortened part is anchored to the surrounding soil by tiny claw-like bristles (setae) set along its segmented length. The whole process is aided by the secretion of a slimy lubricating mucus.

How long does it take your worm to move one foot?

You'll have to measure this yourself! Instruction is given below.

To solve the problem of enticing the worms to travel in a particular direction, you may place them in the center of a circle with a one-foot radius (two-foot diameter) and see which one gets out first. You may use different circles for each worm as long as the circles are the same size, or you may use the same circle and time each worm. Measure the amount of time that elapses between when the worm is released and when it gets to the edge of the circle. That way you will know how long it takes it to travel one foot.

Answer the following questions about leeches.

Where do they live?

Leeches prefer warm shallow water where there is little to no current.

What do they eat?

All leech species are carnivorous. Some are predatory, feeding on a variety of invertebrates such as worms, snails, insect larvae, crustaceans, while a very few feed on the blood of vertebrates such as amphibians, reptiles, waterfowl, fishes, and mammals (including humans).

How are they harmful to humans?

A leech attaches itself when it bites, and it will stay attached until it has had its fill of blood. Due to an anticoagulant (hirudin) that leeches secrete, bites may bleed more than a normal wound after the leech is removed. The effect of the anticoagulant will wear off several hours after the leech is removed and the wound is cleaned. The amount of blood loss from a leech bite is more of a nuisance than a danger for humans.

Leech bites tend to itch while healing, but this is normal. Itching is not reason for alarm, although the wound should be watched to ensure it is healing and to make sure there are no signs of infection.

Leeches do carry parasites in their digestive tract, but these cannot survive in humans and do not pose a threat. If the wound is cleaned, there is no more risk of infection than any other small wound. The wound should not be scratched as this may complicate healing and introduce other infections.

Many people believe that it is best not to remove a leech but to wait for the leech to have its fill and detach itself. This does prevent the risk of additional damage or complications from removal, but concerns about leaving portions of the leech's sucker attached to the wound are exaggerated. It is generally considered preferable to remove the leech promptly.

Leeches should not be removed by burning or applying harsh agents such as salt. This may damage the bite further and cause additional pain. Most importantly, damaging the leech may cause it to regurgitate stomach bacteria that may lead to infection of the wound.

An alternate removal procedure is to apply a heat rub. Leeches have an adverse reaction to the menthol contained in heat rubs and will detach quickly upon contact with the substance.

How are they helpful to humans?

The leech has long been used in medicine, although today its use is mainly limited to limb reattachment procedures instead of the wide-ranging medical use of the past.

Leech saliva contains a number of compounds which assist in its feeding. An anaesthetic limits the sensations felt by the host (and thus reduces the chance of the host trying to detach the leech). A vasodilator causes the blood vessels near the leech to become dilated, and thus provide the leech with a better supply.

Lastly, the leech saliva contains a substance called hirudin, which keeps blood from clotting. The leech needs this to prevent blood clots (which would block its feeding) from forming in the wound created by its mouthparts. These properties are difficult to achieve using other medical techniques, and it is for this reason that leeches have come back into clinical practice in the last 25 years.

Below are images of the American Medicinal Leech, Macrobdella decora, which has been used for medicinal purposes. The vertical image shows two phases of movement when the leech is using a contraction/expansion method to move. The leeches also wriggle in the water to move. 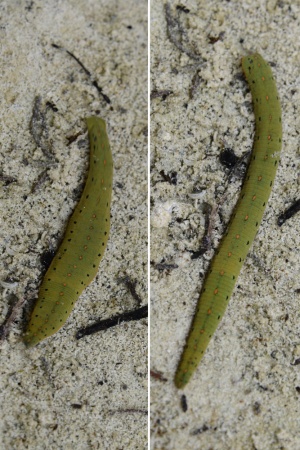 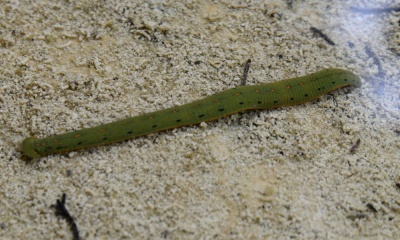 Find a verse in the Bible where worms are mentioned and demonstrate the story (through music, poem or drama).

There are more. Search an online Bible for worm or leech.

Discord? What about it!
This page was last edited on 3 January 2023, at 15:40.
This is an official site of the North American Division Youth & Young Adult Ministries of the Seventh-day Adventist Church.
9705 Patuxent Woods Dr
Columbia, MD 21046