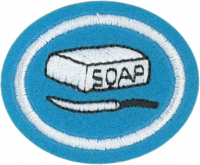 What ingredients are used to make soap?

What is the difference between soap and detergent?

What causes the cleansing action of soap?

Soap is an excellent cleanser because of its ability to act as an emulsifier.

Write or tell a story about the history and origin of soap.

A soap like material found in clay cylinders during the excavation of ancient Babylon is evident that soap making was known as early as 2800B.C. Soap got it name according to an ancient Roman legend, from Mount Sapo where animals were sacrificed.

The earliest known use of a natural soap-like substance was the powder of the Reeta (Sapindus) nut, which was used by Indians since antiquity. Hindus in India were obliged to bathe at least once a day, every morning, in accordance with Ayurveda. Evidence of manufactured soap use are Babylonian clay cylinders dating from 2800 BC containing a soap-like substance. A formula for soap consisting of water, alkali and cassia oil was written on a Babylonian clay tablet around 2200 BC.

The Ebers papyrus (Egypt, 1550 BC) indicates that ancient Egyptians bathed regularly and combined animal and vegetable oils with alkaline salts to create a soap-like substance. Egyptian documents mention that a soap-like substance was used in the preparation of wool for weaving.

It had been reported that a factory producing soap-like substances was found in the ruins of Pompeii (79 AD). However, this has proven to be a misinterpretation of the survival of some soapy mineral substance, probably soapstone at the Fullonica where it was used for dressing recently cleansed textiles. Unfortunately this error has been repeated widely and can be found in otherwise reputable texts on soap history. The ancient Romans were generally ignorant of soap's detergent properties, and made use of the strigil to scrape dirt and sweat from the body. The word "soap" (Latin sapo) appears first in a European language in Pliny the Elder's Historia Naturalis, which discusses the manufacture of soap from tallow and ashes, but the only use he mentions for it is as a pomade for hair; he mentions rather disapprovingly that among the Gauls and Germans men are likelier to use it than women.

A story encountered in some places claims that soap takes its name from a supposed "Mount Sapo" where ancient Romans sacrificed animals. Rain would send a mix of animal tallow and wood ash down the mountain and into the clay soil on the banks of the Tiber. Eventually, women noticed that it was easier to clean clothes with this "soap". The location of Mount Sapo is unknown, as is the source of the "ancient Roman legend" to which this tale is typically credited. In fact, the Latin word sapo simply means "soap"; it was borrowed from a Celtic or Germanic language, and is cognate with Latin sebum, "tallow", which appears in Pliny the Elder's account. Roman animal sacrifices usually burned only the bones and inedible entrails of the sacrificed animals; edible meat and fat from the sacrifices were taken by the humans rather than the gods. Animal sacrifices in the ancient world would not have included enough fat to make much soap. The legend about Mount Sapo is probably apocryphal.

True soaps made from vegetable oils (such as olive oil), aromatic oils (such as thyme oil) and Lye (al-Soda al-Kawia) were first produced by Muslim chemists in the medieval Islamic world. The formula for soap used since then hasn't changed. From the beginning of the 7th century, soap was produced in Nablus (West Bank, Palestine), Kufa (Iraq) and Basra (Iraq). Soaps, as we know them today, are descendants of historical Arabian Soaps. Arabian Soap was perfumed and colored, some of the soaps were liquid and others were hard. They also had special soap for shaving. It was sold for 3 Dirhams (0.3 Dinars) a piece in 981 AD. The Persian chemist Al-Razi wrote a manuscript on recipes for true soap. A recently discovered manuscript from the 13th century details more recipes for soap making; e.g. take some sesame oil, a sprinkle of potash, alkali and some lime, mix them all together and boil. When cooked, they are poured into molds and left to set, leaving hard soap.

In semi-modern times soap was made by mixing animal fats with lye. Because of the caustic lye, this was a dangerous procedure (perhaps more dangerous than any present-day home activities) which could result in serious chemical burns or even blindness. Before commercially-produced lye (sodium hydroxide) was commonplace, potash, potassium hydroxide, was produced at home for soap making from the ashes of a hardwood fire.

Scum is the substance which results from the reaction of the hardness mineral in water with common household soaps. Evident as a bath tub ring or on shower doors.

Carve an object from a bar of soap.

Here are some pathfinder soap carvings for examples.

You can buy multipacks of soap at reasonable prices at large "warehouse" type stores such as Costco or Sam's Club, or at large retailers such as Target or Walmart. Ivory soap works pretty well for this, though you may wish to check that none of your Pathfinders are allergic to it before you buy it.

Start by tracing the design onto the bar of soap, etching the lines lightly into the soap with a pointed stick or the tip of a knife. Instruct your Pathfinders on knife safety before handing out the knives:

Once the design is etched into the soap, begin removing the soap that does not belong there. Do not remove huge chunks all at once or the soap may break. You can also use the knife to drill holes in the soap.

Decorate a bar of soap for a gift.

Soap can be decorated by attaching ribbons with pins. You can also use pins to attach photos (crop them first), pictures cut from magazines, buttons, doilies, etc. Be creative! Pay attention to the colors of the materials you attach to the soap compared to the color of the soap itself. Soap need not be carved before decorating, but it may help to cut any lettering (such as the brand's logo) off before attaching pictures.

If you have pictures to contribute, we'd love to add them.

Make a scene out of whipped soap, using at least three colors.

Reuse the shavings left over from carving or use soap flakes. Add a little water and whip in a mixing bowl using either a whisk or an electric beater. When you have plenty of soap whipped up, spoon it into bowls and add food coloring (a different color for each bowl). Mix the coloring in until it is even.

Once you have all the colors you need, paint it onto a "canvas" with a regular artist's paintbrush. The canvas can be as simple as a paper plate or piece of construction paper.

If you have pictures to contribute, we'd love to add them.

Discord? What about it!
This page was last edited on 4 October 2021, at 15:38.
This is an official site of the North American Division Youth & Young Adult Ministries of the Seventh-day Adventist Church.
9705 Patuxent Woods Dr
Columbia, MD 21046