String Craft
String Craft is making something (craft or art) out of string.

Symmography
Symmography is creating 3D designs with string without knotting or knitting.

Geometric Stitchery
Geometric Stitchery is like Symmography but instead of using nails to hold the string on the surface of the media you use a needle or precut holes to go through the media and come out to a new point in the media. Much like sewing on a patch.

2. Draw and stitch on cardboard in equally spaced points:

There are many ways to prepare the wood for string art:

Paint
Paint covers the wood and gives you a smooth surface with the color(s) of your choice.
Stain
Stain changes the color of the wood while still showing the nature and texture of the wood. Stained wood can be lacquered or varnished to make it glossy.
Lacquer
Lacquer (clear) protects the wood without changing its color. It leaves a glossy finish.
Felt
Cover the wood with felt. Use staples on the back or a thin, even coat of white glue on the front. Dots of glue will show through, so if you are going to use glue, it must be spread evenly, as if you were painting with it. Stretch the felt over the wood tightly, eliminating all wrinkles.

Once the wood has been finished, the string artist will drive small nails partway into the board. These nails are the points around which the strings are run. When setting the nails, at least half the nail should be left exposed above the wood. Care must be taken to drive the nails to a sufficient depth so that they do not pull out when placed under tension by the string. The project will look far better if all the nails are set to the same height, and if they are perfectly vertical.

If you have difficulty setting the nails (big fingers plus little nails equal trouble!) try holding the nail in place with a pair of needle nose pliers.

To begin, anchor the first string to the first nail using a slip knot. Tug on it to be sure it will hold before spending a lot of time running the string. If it pulls loose halfway through the design, it will be difficult to salvage all that hard work.

4. Use stringing methods on wood to do four of the following:

The hollow and filled circles are also of a star design. 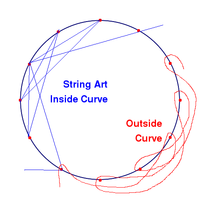 e. Curve from within

When you curve from within the string covers some part of the inside curve.

f. Curve from without

5. Complete one original string art hanging on wood for display.

This is your part. Enjoy!