This Wiki has a page with instructions and tips for earning the Antelopes honor.

1. Give the order, and the scientific name of the family, to which the antelope belong.

The artiodactyla are the even-toed ungulates (that is, animals with hooves and an even number of toes).

A bovid is any of almost 140 species of cloven-hoofed mammals belonging to the family Bovidae. The family is widespread, being native to all continents except Australia and Antarctica, and diverse: members include buffalo, bison, antelopes, gazelles, and both wild and domesticated cattle, sheep, goats, and water buffalo.

2. Give the distinguishing characteristics of the different sub-families, with examples of each.

3. Which large antelope differs from most of the others in appearance? What are some of its peculiar habits? 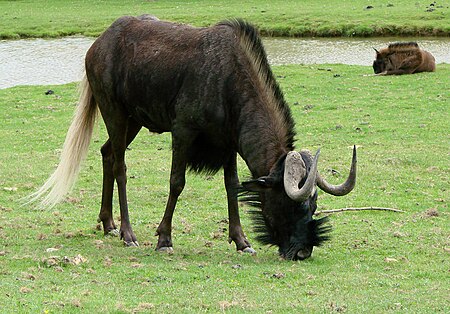 The wildebeest, also known as the gnu.

The wildebeest is the most unique looking antelope. It has a beefy muscular front-heavy appearance with a distinctive robust muzzle, it strides with relatively slender legs and moves gracefully and quietly most of the time, belying the reputation for stampeding in herds; however the stampeding characteristic may sometimes be observed. Probably the most conspicuous feature of the Blue Wildebeest are the large horns shaped like parentheses, extending outward to the side and then curving up and inward. The manes appear long, stiff, thick and jet black, a color assumed by the tail and face as well.

Blue Wildebeests can tolerate arid regions, as long as a potable water supply is available. Since all Wildebeests require a long drink every day or two, they must have water within about 15 or 25 kilometers distance. Their blunt muzzles are best equipped for biting short green grasses, since a wide incisor row prevents more selective feeding. Short grasses of these type are usually only found on alkaline or volcanic soils.

The Serengeti herds are purely migratory and abandon the usual plains after the rainy season has ended, in order to seek higher grasses in wetter areas. Grasslands bordering alkaline lakes or pans are particularly choice dry season (winter) habitats. Herds may be mixed gender with a dominant male, female only or bachelor only. Blue Wildebeest often graze together with other species such as Plains zebras for purposes of mutual protection. Zebras in particular are beneficial to co-exist with since they mow down highly vegetated areas leaving the wildebeests to eat the newly exposed and more nutritional short grasses, which is what they prefer. A Blue Wildebeest can attain a speed of up to 65 kilometers per hour.

4. What is the function of musk glands in the antelopes? Where are these glands situated on the gregarious types? On the solitary types?

Musk glands secrete a substance with a penetrating odor called (what else?) musk. The purpose of musk is to attract a mate. On the gregarious types of anteloope, the musk glands are located on the face beneath the eyes. On the solitary types, it is within a sac located between the genitals and the umbilicus (belly button).

5. Which species could you expect to find in:

a. Bush, or reed beds, near water?

Grysbok
The Cape Grysbok's native habitat is the "Fynbos biome" (Cape Floristic Region), and it inhabits thick shrubland. It can sometimes be found browsing orchards and vineyards. It may also be found in reed beds and along the riverbed of the southern Karoo.
Reedbuck
Three species of Reedbuck are native to central Africa, mostly living in grassland areas near water.
Topi
The Topi is a savannah and floodplain antelope.
Waterbuck
Waterbuck are found in scrub and savanna areas near water where they eat grass. Despite its name, the waterbuck does not spend much time in the water, but will take refuge there to escape predators.

Oryx
All oryx species prefer near-desert conditions and can survive without water for long periods.
Addax
The Addax (Addax nasomaculatus) is a critically endangered desert antelope that lives in several isolated regions in the Sahara desert.
Springbok
In South Africa springbok inhabit the vast grasslands of the Freestate and the open shrublands of the greater and smaller Karoo. In Namibia they live in the grasslands of the south, the kalahari desert to the east and the dry riverbeds of the northern bushveld of the Windhoek region. In Botswana they mostly live in the Kalahari Desert in the southwestern and central parts of the country.

Blackbuck
On the open plain, the Blackbuck is one of the fastest animals and can outrun most predators over long distances.
Springbok
Springbok live in many habitats.
Gazelles
Gazelles are mostly found in the grasslands and savannas of Africa
Dik-dik
Dik-diks live in open plains amongst other grass-eaters such as giraffes, zebras, and other antelopes. Dik-diks may live in places as varied as dense forest or open plain, but they must have good cover and not too much tall grass or plants.

Duikers
Duikers are shy and elusive creatures with a fondness for dense cover; most are forest dwellers and even the species living in more open areas are quick to disappear into thickets.
Sable Antelope
Sable Antelope live in wooded savannah where they eat mid-length grass and leaves.
Dik-dik
See above under "open plains".

e. The vicinity of rocky kopjes, or on hillsides?

Chiru
Chirus live on the high mountain steppes and semi-desert areas of the Tibetan plateau such as Kekexili.
Klipspringer
With a thick and dense speckled "salt and pepper" patterned coat of an almost olive shade, Klipspringers blend in well with the koppies (rock outcrops, pronounced "copies") on which they can usually be found. 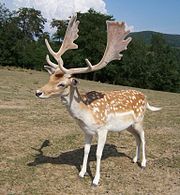 Though there are no native deer in South Africa, the Europeans imported the fallow deer during colonial times. Deer have antlers rather than horns. While an antler is growing it is covered with highly vascular skin called velvet, which supplies oxygen and nutrients to the growing bone; once the antler has achieved its proper size, the velvet is lost and the antler's bone dies. This dead bone structure is the mature antler. Antlers shed after each mating season. Horns are not shed, but are permanent fixtures on the animal's head. Rather than a velvet covering, horns are covered with keratin (the same thing fingernails are made of).

7. Name at least 20 species of antelope that you have observed and can identify out-of-doors, not more than 5 of which are in captivity.

Now you know why this honor was specific to the East-Africa Division when first introduced.

No antelope species is native to Australasia or Antarctica, nor do any extant species occur in the Americas.

Many species of antelopes have been imported to other parts of the world, especially the United States, for exotic game hunting. With some species possessing spectacular leaping and evasive skills, individuals may escape. Texas in particular has many game ranches, as well as habitats and climates, that are very hospitable to African and Asian plains antelope species. Accordingly, wild populations of blackbuck antelope, gemsbok, and nilgai may be found in Texas.

Bovids are most plentiful in Africa, but there are at least five wild species in North America:

Of course, domestic bovids are plentiful in North America, as they include goats, sheep, and cattle. Though none of the animals we have listed in this requirement so far are antelopes, keep in mind that there is no scientific distinction between antelopes and other bovids. Basically, if a bovid is not an ox, goat, or sheep, then it is considered an antelope.

For those outside Africa trying to earn this honor, it might be appropriate to ignore this distinction (it is, after all, quite arbitrary and unscientific). Even with the expanded definition, those living in the NAD are still left with a major problem - the wild North American bovids are relatively rare, and pretty much limited to the West. Some of them are quite elusive. Spotting all of them in the wild would be quite a feat indeed. Spotting 20 antelopes in captivity can be easily accomplished by visiting a large zoo (or by visiting multiple, smaller zoos).

A possible alternative for those living outside Africa is to study the antelopes prior to a zoo visit. Then keep track of how many antelopes you can correctly identify by observing the animal (rather than the placard outside its enclosure). As the instructor of this honor, if you cannot find a way to meet this requirement, you should substitute something else that would require an equivalent effort if you lived in Africa. Please do not just waive the requirement.

8. What is a gazelle? Where would you find this animal?

A gazelle is an antelope of the genus Gazella, but there are also three members of the genus Procapra that are also referred to as gazelles. Gazelles are known as swift animals; they are able to reach high speeds (about 56 km/hour

) for long periods (15 minutes) of time. Gazelles are mostly found in the grasslands and savannas of Africa, but they are also found in southwest Asia. They tend to live in herds and will eat less coarse, easily digestible plants and leaves.

9. Name some diseases associated with wild bovies. How are they transmitted? Of what economic importance are they to man?

Outbreaks of foot-and-mouth disease have resulted in the slaughter of millions of domestic animals, despite this being a frequently non-fatal disease for adult animals (2-5% mortality), though young animals can have a high mortality. The destruction of animals is primarily to halt further spread, as growth and milk production may be permanently affected, even in animals that have recovered.

Sleeping Sickness
Sleeping sickness is a parasitic disease in people and animals, caused by protozoa of genus Trypanosoma and transmitted by the tsetse fly. Bovids are susceptible to the disease, and serve as a reservoir for the parasite. Even when the disease is eliminated from the human population, humans can be reinfected when the tsetse fly transfers the parasite from the bovids to people.

Bovine malignant catarrhal fever
Bovine malignant catarrhal fever (BMCF) is a disease caused by alcelaphine herpesvirus 1 (AlHV-1) of the family Herpesviridae. The disease is fatal in cattle and other ruminants such as deer, antelope, and buffalo. In Africa, wildebeests carry AlHV-1 but are not affected by the disease. It is passed from mother to offspring and shed in the nasal secretions of wildebeest calves. Cattle are infected by contact with the secretions, but do not spread the disease to other cattle. Hartebeests and topi also may carry the disease.

10. Know the game laws of your province.

In South Africa foreigners are not allowed to hunt except when they have hired a licensed professional hunter as a guide. The client and the guide must enter into a written contract prior to the commencement of the hunt, and the professional hunter must be licensed in every territory where the hunt takes place.

Hunting in South Africa is allowed year-round, but mostly it is done from June until August. Foreigners may use a rifle provided by the guide, or they may bring their own. If they opt to bring their own, they must declare it to customs when entering the country, and they must take it with them again when they leave. The gun must be marked with a serial number, and the hunter must be able to prove that he owns the rifle.