1. What are the main characteristics of bacteria that distinguish them from other living beings?

Bacteria are single cell organisms (though some do form chains or other colonial groupings, each individual remains its own organism).

The have no membrane around their internal organelles - so rather than a nucleus containing genetic material, which has its own membrane keeping it separate from the rest of the cell contents, bacteria have a nucleoid, without a distinct membrane.

All but one group of bacteria have both a cell membrane and a cell wall.

Many bacteria also have loops of genetic material, called Plasmids, that can serve to transfer genetic information between organisms, and may provide new or useful characteristics for a bacteria, which in part explains why they are able to adapt so quickly as species.

2. Through drawings or pictures, identify the main structures of the bacterial cell. 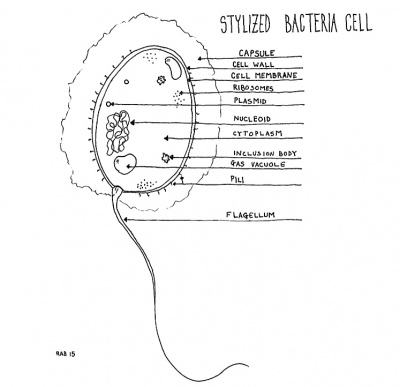 Some structures of bacteria

Capsule (Slime Layer): Provides protection, as well as may serve for adhesion (sticking the cell to something)

Cell Wall: Provides form, structure and protection. There are two different basic structures of cell walls in Bacteria. One is a cell wall made of a relatively thick layer of Peptidoglycan (carbohydrates and proteins). The other has an additional outer layer that includes carbohydrates, proteins and lipids (fats).

Cell Membrane: The boundary of the cell, selectively permeable to allow certain molecules and gasses to pass through.

Plasmid: A ring of genetic material separate from that within the nucleoid

Nucleoid: The location of the genetic material of a bacteria

Cytoplasm: The “goo” inside the cell, in which the organelles and all other content exist.

Pili: microscopic tubes on some bacteria, used for attachment, or as a way to connect two bacteria to transfer genetic material

Flagellum: A hair- or whip-like appendage, used for motility

Endospore: A hard-cased spore produced by a bacteria often to assist in survival of hostile environment.

Other forms include the comma-shaped Vibrios, and two types of corkscrew-shaped bacteria, the rigid Spirilla and the flexible Spirochetes.

4. What are gram negative and gram positive bacteria?

As noted above, bacteria have two types of cell walls. One is a cell wall made of a relatively thick layer of Peptidoglycan (carbohydrates and proteins). The other has an additional outer layer that includes carbohydrates, proteins and lipids (fats). Hans Christian Joachim Gram, a Danish bacteriologist, developed a staining method to rapidly identify which of these two basic cell walls a bacteria possesses. The bacteria with the first type of cell wall are stained using Gram’s method, those of the second type are not stained. Thus the former are referred to as Gram Positive bacteria, the latter Gram Negative. The Gram test is often one of the first performed to help identify a particular bacteria colony.

5. Explain the different forms of reproduction of bacteria. What are the main environmental conditions necessary for bacteria to reproduce?

Different types of bacteria have different environmental requirements for reproduction, but in general bacteria usually need warm locations with plenty of their particular nutrients readily available. 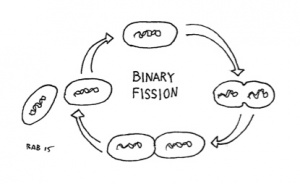 There are also a few variations of asexual reproduction in different groups of bacteria. 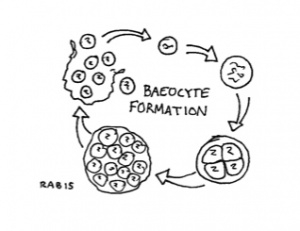 Certain bacteria may reproduce through budding, a process where a small bud forms on a parent bacteria, genetic material is transferred to the bud, and then it separates. 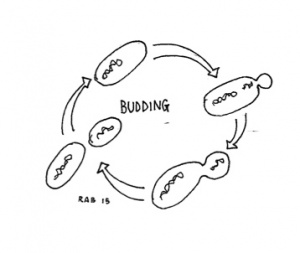 Some bacteria, including some of the Firmicutes bacteria, create two complete daughter cells inside the parent, then the parent breaks open and dies, releasing the two new bacteria cells. 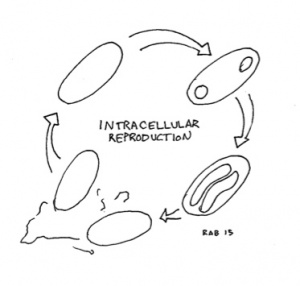 Conjugation: Bacteria transfer genes (usually on plasmids) via their pili. 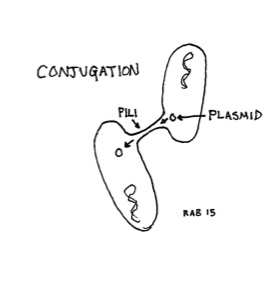 Transduction: A bacteriophage (a virus that uses bacteria as a host) may pick up some pieces of genetic material from a previous host and incidentally transfer it into a new bacterial host. 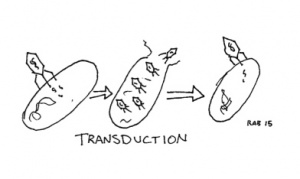 Transformation: Bacteria may pick up fragments of genetic material from their environment, usually left by dead bacteria. 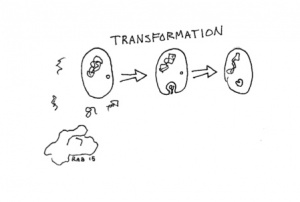 6. What do bacteria feed on and how to they breathe?

Photoautotrophs (light-self-feed) are capable of photosynthesis, using sunlight as part of the process to take up nutrients from their environment. Some may be able to draw on sulfur compounds, or acidic hydrogen compounds. Among the photoautotrophs are the green and the purple photosynthetic bacteria, neither of which produce oxygen as a byproduct, and the cyanobacteria, the so-called blue-green bacteria (though some taxonomists place these in their own category separate from other bacteria).

Chemoautotrophs (chemical-self-feed) are those that can produce their own organic compounds, but do not necessarily need sunlight as a precursor. Some of the bacteria at the base of the food chain near deep sea hydrothermal vents are chemoautotrophs. Different chemoautotrophs utilize different “foods,” including iron, ammonia, nitrite, sulfur and hydrogen gas. Some of the most important are those that can convert nitrite (NH3) into a form of nitrogen that plants can absorb. This process is called nitrification, or more commonly nitrogen fixing. Some bacteria capable of fixing nitrogen are considered chemolithotrophs, able to effectively live on rock as a substrate.

Saprophytes (dead-feed) are the bacteria that break down organic matter into simpler molecules. These are the decomposers, as well as many of the beneficial bacteria in the guts of animals (including people). Some are capable of breaking down cellulose or other plant-based materials that human digestive systems cannot.

Parasitic bacteria are those that draw nutrients directly from a host. Rickettsia and Chlamydia, two disease-causing bacteria, must live inside animal cells, and are examples of parasitic bacteria. 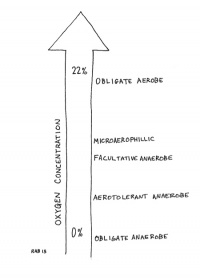 There are many harmful bacteria, impacting humans, animals and plants. As question 10 discusses illnesses caused by bacteria, more attention can be given in this question to bacteria that are “harmful” in other ways.

Some examples of harmful bacteria include:

Bacillus anthracis (Anthrax) - often found in soil, the spores can lead to death in cattle if ingested.

Clostridium botulinum (Botulism) - A bacteria that produces a neurotoxin as a byproduct of its metabolic process - it is often a cause of food poisoning.

Streptococcus sp. (Strep) - A bacteria that is usually always present in small amounts in humans, when the immune system is weakened (through surgery, through cold or fatigue, or for other reasons), there can be rapid growth and damage, potentially leading to strep throat, pneumonia or other illnesses.

There are numerous beneficial bacteria, from those within our own intestines to the myriad decomposers that help break down and recycle organic matter, to bacteria used in food production.

Nitrosomonas sp. (Nitrogen fixers) - As mentioned earlier, some bacteria in the soil or in water are able to break down nitrites and ammonia, converting the nitrogen into forms that can be utilized by plants.

Bacteroides sp. (Gut flora) - Bacteroides are among the many different bacteria living in our intestines, breaking down complex molecules that our bodies are not capable of breaking down, and freeing some of those nutrients for our body to absorb.

Lactobacillus sp. - These are some of the many types of bacteria used in the cheese making process, converting milk into cheese through the breakdown of lactose.

9. Name a story in the Bible where an illness was caused by bacteria.

If we assume the word “leprosy” in the Bible refers to the modern disease leprosy, then these are all stories about a disease caused by the bacteria Mycobacterium leprae. Among these are the story of the healing of Naaman in 2 Kings 5, or examples of Jesus healing lepers, as in Luke 17 and Mark 10.

10. Name five illnesses caused by bacteria and some precautions to take to avoid them.

Below are some examples. Consider bacterial illnesses that may occur in your area, or in places you may travel to (for missionary service, perhaps).

Prevention: Vaccination. Also, for the unvaccinated, in areas where Typhoid may be present, it is best not to consume fresh fruits and vegetables that have been washed with untreated water, and best not to drink water that isn’t bottled (also be wary of ice, as it is usually made from local water).

Prevention: In areas where cholera may be prevalent, wash hands thoroughly, avoid fresh fruit or vegetables unless you can peel them yourself, only eat cooked food, do not drink the local water.

Prevention: Vaccination (note that tetanus vaccinations need updated relatively frequently compared to many other types of vaccinations) Also, be careful around rusty and dirty objects that can cause puncture wounds or cuts. Wash wounds thoroughly and apply a surface antiseptic. Leave deeper wounds open to drain (seek medical attention as appropriate).

Tuberculosis (Mycobacterium tuberculosis) - Transferred through droplets in coughs and sneezes.

Prevention: Use caution in areas where tuberculosis is common. Wear face masks, wash hands, do not touch hands to face or mouth, try to avoid enclosed spaces with those that may be infected, work in open, well ventilated areas.

11. Why shouldn't you self-medicate or use antibiotics without a prescription?

As noted above, bacteria have a unique strategy to ensure genetic variability - the presence of plasmids. In any given colony of bacteria, there are likely to be a few mutants that may survive an otherwise toxic situation (such as the presence of a certain anti-biotic). Those that survive will pass the trait on to their offspring through binary fission, but may also pass it on to other types of bacteria via the plasmids. Given the rapid pace of bacterial reproduction, this can relatively quickly lead to the development of antibiotic-resistant bacteria. Each time they develop one resistance, a different antibiotic is necessary to treat an infection. The overuse of antibiotics can accelerate the genetic transformation of bacteria, leading to new forms that become resistant to all common antibiotics, and thus making them more dangerous.