1. Explain the differences between the Dromedary and the Bactrian camel. Why are both recognizable and important?

There are two (or three counting wild) subspecies of camel. 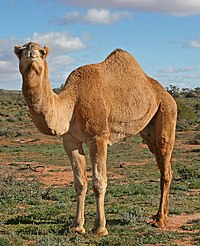 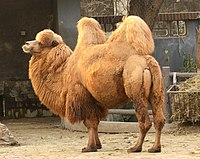 The domesticated Bactrian camel has served as a pack animal in inner Asia since ancient times. With its tolerance for cold, drought, and high altitudes, it enabled travel such as the caravans of the Silk Road.The wild form has dwindled with limited remaining populations. ts range in the wild is restricted to remote regions of the Gobi and Taklamakan Deserts of Mongolia and China, migrating from the desert to rivers in Siberia during winter. A small number of wild Bactrian camels still roam the Mangystau Province of southwest Kazakhstan and the Kashmir valley in India. There are feral herds of Bactrian camels in Australia.

The two types are sometimes bred together, producing an even bigger, stronger camel useful for plowing and other work. Camel wrestling (a sport where male camels are exposed to an in heat female and then allowed to fight each other) almost exclusively uses cross bred camels.

Recent research suggests that wild camels may be another species, possessing a different number of chromosomes.

2. Describe the following characteristics of camels:

a. Three uses attributed to them

b. Amount of water they drink

Camels can go for months without water, but when they drink they can gulp down up to 57 liters at once.

The question is a little misleading as there are four recognized species of South American camilids. llama, alpaca (two fiber types), vicuñas, and guanacos.

a. Region where it lives

Vicuñas live exclusively in South America, primarily in the central Andes at altitudes of 3,200 to 4,800 m. They are native to Peru, northwestern Argentina, Bolivia, and northern Chile, with a smaller, introduced population in central Ecuador. Peru has the largest number.

Guanaco are found in the altiplano of Peru, Bolivia, Ecuador, Colombia, Chile, and Argentina. Some Guanacos live in the Atacama Desert, where in some areas it has not rained for over 50 years. A coastline running parallel to the desert enables them to survive. Where the cool water touches the hot land, the air above the desert is cooled, creating a fog and thus, water vapor. Winds carry the fog across the desert, where cacti catch the water droplets and lichen that cling to the cacti soak it in like a sponge. When the guanacos eat the cacti flowers and the lichen, the water is transferred to them.

As domesticated versions of their wild cousins llamas and alpacas were confined to South American until exported to North America, Europe, Australia and elsewhere as livestock in the 1980s.

All the South American Camilids have similar body features including a long neck and soft fiber. The current forms of the domesticated llama and alpaca (and perhaps their wild cousins) are undoubtedly the result of selective breeding for either the size and strength of the llama or the soft fiber of the alpaca. The differences are similar to differences in breeds of dogs since the South American camilids can all be easily interbreed with fertile crosses resulting. Recently scientists in the UAE used artificial insemination (to overcome the size issue) to bred a llama to a camel successfully and called it a "cama."

The main differences between the species is size and fiber quality and domestic vs wild status.

All camelids eat vegetation, including pretty much anything they can find. In their natural habitat food can be very scarce.

4. Do some research on predation of South American camelids. Why are these animals endangered?

The domesticated alpaca and llama are not endangered. They have been exported to many countries in the world and in the US and Canada at least, supply exceeds demand.

Both under the rule of the Inca and today, vicuñas have been protected by law, but they were heavily hunted in the intervening period. Before being declared endangered in 1974, only about 6,000 animals were left. Today, the vicuña population has recovered to about 350,000, and although conservation organizations have reduced its level of threat classification, they still call for active conservation programs to protect populations from poaching, habitat loss, and other threats. The species is listed as Least Concern.

Hunting was also an issue for the guanaco but similar conservation efforts resulted in the species being listed least concern. Estimates, as of 2011, place their numbers at 400,000 to 600,000. They have only one natural predator, the mountain lion. A few hundred guanaco are held in zoos and on farms successfully. 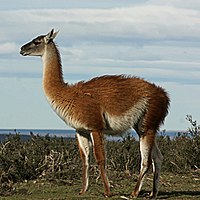 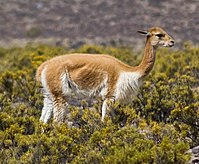 5. Complete a Bible study about the verse Matthew 19:24, emphasizing Jesus's words. Write 200 words about what was learned in this lesson (use Bible commentaries to understand the context; it is necessary to read all of Matthew chapter 19).

Jesus is talking about the difficulty of a proud or rich person to get into heaven. For 1500 years or more there has been a story that Jesus was talking about a small gate in the city wall that the camels had a hard time with. In other words it is difficult but not impossible. However, The Wycliffe Bible Commentary debunks this: "The idea that the eye of a needle, referred to here, was a small gate through which a camel could enter only on his knees is without warrant." "The word for needle [in Greek] refers specifically to a sewing needle. Furthermore, Jesus was not talking about what man considers possible, but about what seems to be impossible (cf. v. 27)." (The Wycliffe Bible Commentary)

The young man put his money ahead of allegiance to God or willingness to follow Jesus. It is not fair to say that money keeps everyone out of heaven, for the Bible is filled with righteous rich people (David, Esther, Soloman, Job, Abraham and more).

This answer is just an example. Pathfinders are urged to study this what others have written about this much debated passage for themselves and put it in their own words.

There are about 59 total verses that reference camel(s), camel hair and a camel saddle in the Bible. Here are all of them grouped chronologically:

Genesis 12:16 Abram/Abraham owned camels and in Genesis 24 sent them with his servant to Nahor where Rebekah was. After Rebekah waters the camels she and others rode the camels.

Jacob acquired camels Genesis 30:43 and used them for riding and as pack animals Genesis 31:17 and Genesis 32:7

In Genesis 31:34 Rachel hid an idol in her camel saddle, while sitting in the tent.

In Genesis 32:15 Jacob gifted 30 female camels and their young to his brother Esau.

In Genesis 37:24-26 we see that the caravan of Ishmaelites coming from Gilead had camels loaded with spices, balm and myrrh, and and were heading to Egypt. Joseph is sold by his brothers to the traders with the camels.

Camels in Egypt and the Exodus

In Exodus 9:2-4 we learn the Egyptians had camels along with horses, donkeys, cattle, sheep and goats (the Israelites might also have had camels, as the text says they had livestock too, but that God would not harm the Israelite's animals.

God in Leviticus 11:4 and Deuteronomy 14:7 declares that camels are unclean and should not be eaten.

It was impossible to count the Midianites or their camels in Judges 6:5 when they invaded the land to ravage it. Also in Judges 7:12 "The Midianites, the Amalekites and all the other eastern peoples had settled in the valley, thick as locusts. Their camels could no more be counted than the sand on the seashore."

In Judges 8 we learn that some Midianite camels wore ornaments and chains on their necks (which could be gold from the context). Gideon and others took these off the camels necks.

In 1 Samuel 15:3 God commanded that the Amalekites be totally destroyed. "Do not spare them; put to death men and women, children and infants, cattle and sheep, camels and donkeys."

According to 1 Chronicles 5:21 In the days of Saul "they (the Israelites) seized the livestock of the Hagrites—fifty thousand camels, two hundred fifty thousand sheep and two thousand donkeys. They also took one hundred thousand people captive."

David's practice was to take plunder, including camels according to 1 Samuel 27:9

1 Chronicles 12:40 says that "neighbors from as far away as Issachar, Zebulun and Naphtali came bringing food on donkeys, camels, mules and oxen" while David's army was growing.

1 Chronicles 27:30 "Obil the Ishmaelite was in charge of the camels" for King David.

The Queen of Sheba (modern Ethiopia) used camels as pack animals in 1 Kings 10:2 and the parallel account in 2 Chronicles 9:1 when she came to see King Solomon.

2 Kings 8:9 says that "Hazael went to meet Elisha, taking with him as a gift forty camel-loads of all the finest wares of Damascus. He went in and stood before him, and said, “Your son Ben-Hadad king of Aram has sent me to ask, ‘Will I recover from this illness?’”"

King Asa's army when fighting the Cushites in 2 Chronicles 14:15 "also attacked the camps of the herders and carried off droves of sheep and goats and camels."

Isaiah 21:7 mentions riders on camels. Isaiah 30:5-7 says "A prophecy concerning the animals of the Negev: Through a land of hardship and distress, of lions and lionesses, of adders and darting snakes, the envoys carry their riches on donkeys’ backs, their treasures on the humps of camels, to that unprofitable nation, to Egypt, whose help is utterly useless. Therefore I call her Rahab the Do-Nothing."

Isaiah 60:6 mentions "Herds of camels will cover your land, young camels of Midian and Ephah." and Isaiah 66:20 proposes people will come on camels to Jerusalem to worship.

Jeremiah writes in Jeremiah 49 that the Kedar and the kingdoms of Hazor, which Nebuchadnezzar king of Babylon attacked will lose their camels.

Ezekiel 25:5 predicts that "I will turn Rabbah into a pasture for camels and Ammon into a resting place for sheep. Then you will know that I am the Lord."

Zechariah 14:15 says that a plague will strike the livestock, including camels, of the enemies of the Lord.

In Mark 1:6 and Matthew 3:4 John the Baptist's clothes were made of camel’s hair, and he had a leather belt around his waist.

Matthew 23:24 Jesus says "You blind guides! You strain out a gnat but swallow a camel."