1. In what way is the Cetaceans family different from most other sea life?

The Cetacean family is different from most other sea life because Cetaceans are mammals. This means :

The large whale mothers move to warm tropical waters to give birth and spend about six months there so their babies can grow a layer of fat (blubber) to help them survive the cold frigid waters where they live for the other six months. While in the warm waters the adult whales do not eat at all.

In addition to the characteristics of mammals listed above, cetaceans differ from other sea life in other ways as well. One of these differences between a cetacean and a fish is the shape of the tail. The tail of a fish is vertical and moves from side to side when the fish swims. The tail of a cetacean – called a "fluke" – is horizontal and moves up and down.

2. Explain the difference between Baleen and Toothed Whales.

The order Cetacea contains about 90 species, all marine except for four species of freshwater dolphins. The order contains two suborders: Mysticeti (baleen whales) and Odontoceti (toothed whales, which includes dolphins and porpoises). The species range in size from Commerson's dolphin, smaller than a human, to the blue whale, the largest animal ever known to have lived.

The baleen whales, also called whalebone whales or great whales, are one of two suborders of the Cetacea (whales, dolphins and porpoises). Baleen whales, rather than having teeth, have baleen plates which hang from the upper jaw and are used for filtering food from water. This distinguishes them from the toothed whales. Baleen is a type of hair but stiff like a soft fingernail. It grows from the roof of the mouth in two rows and is used to filter out food from water. 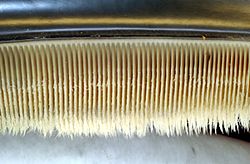 The whale is able to take in a huge mouthful of water and then squeeze its mouth shut and squeeze out the water while straining out the food. Baleen whales feed on tiny creatures called krill and need lots of these to fuel their bodies. Most of the big whales are baleen whales, e.g. Blue whale, humpback whale and fin whale. Krill is one of their major foods, which they strain through their baleen.

The toothed whales have teeth because they feed on creatures much larger than krill, such as squid, fish seals and even other whales. These whales are the dolphins and porpoises, the killer whale and the giant sperm whale.

Dolphins and porpoises mainly feed on fish and may hunt in groups called pods.

Killer whales eat seals, fish, dolphins and even blue whales. They are called the Wolves of the Sea.

The sperm whale is the largest toothed whale. It will eat fish and octopus but its favourite food is giant squid that live in the deep ocean. A sperm whale has been known to dive to 3200 meters looking for squid.

3. In what way have Whales and Dolphins been a benefit to man?

In some cultures, whales provide meat for both pets and for humans. Whales also provide oil for fuel, perfumes, and other products. Entire communities were established devoted to whaling. Although whaling is now illegal in most parts of the world, whales continue to provide benefits to man. They are a major tourist attraction in areas where they are common, and an entire industry has sprung up to bring people to see the whales.

There are many stories of dolphins protecting shipwrecked sailors against sharks by swimming circles around the swimmers. Because of their high capacity for learning, dolphins have been employed by humans for any number of purposes. Dolphins trained to perform in front of an audience have become a favorite attraction at many aquariums, for example SeaWorld. Such places may sometimes also provide an opportunity for humans to interact very closely with Dolphins. Dolphin/Human interaction is also employed in a curative sense at places where dolphins work with autistic or otherwise disabled children. The military has employed dolphins for various purposes from finding mines to rescuing lost or trapped persons.

4. Explain how it is that a Whale which breeds in the warm waters of the tropics can also survive the ice cold water of the Antarctica where they go to feed, (considering the whale is a warm blooded mammal like humans).

Whales have a very thick layer of fat beneath their skin called blubber. Blubber is a very effective insulator, much like a wet suit which is used for keeping divers warm when they swim in cold waters. Blubber is far more effective than a wet suit because it is so thick. In fact, blubber can comprise up to 50% of the body mass of some cetaceans during some points in their lives. Blubber also serves as a source of energy, and whales metabolize (burn) fat to generate heat internally and thus warm themselves. People metabolize fat too when they shiver (shivering serves the same purpose - to warm us up).

6. Write and read to a group, or tell from memory, the story of Jonah.

Go beyond just the part about Jonah and the Whale everyone knows. There is a whole (short) Bible book on Jonah.

If you are teaching this honor to your unit, you can have them retell the story (and act it out) for worship at a campout or at a regular meeting. You can also have your Pathfinders tell the story during regular church service if your church has a time allotted for "Children's Story". Alternately, you can have them write it out and read it back to you (or to the group).

7. Successfully draw a Baleen Whale and identify where the following body parts are:

These are the "strainers" in a baleen whale's mouth.

A cetacean breaths through this little hole in the top of its head.

The fin on the top of many cetaceans.

These are hard to see because they're so small, but cetaceans all have them on the sides of their heads.

The better to see you with!

These are the folds in a baleen whale's throat and allow the whale's throat to expand when it fills its mouth with water to filter its food through its baleen.

The fins on the side.

The reproductive organ of a female cetacean.

The notch in the middle of the trailing edge of the fluke.

The part of the body to which the fluke is attached.

8. Be able to identify at least fifteen Cetaceans.

The order Cetacea includes whales, dolphins, and porpoises. There are around 90 living species, divided into the suborders Mysticeti (the baleen whales covering about 17 species) and Odontoceti (the toothed whales, including porpoises and dolphins covering about 73 species). All Cetacea live in ocean water except for the river dolphins. We present at least one sample from each family of Cetacea here to help you learn to identify them. For more details including range maps and comparative sizes visit https://en.wikipedia.org/wiki/List_of_cetaceans or the wikipedia article linked from the scientific name.

Toothed whales include both true whales, porposes, and ocean and river dwelling dolphins. The Toothed Whales make up about 73 out of the 90 known living species of Cetaceans. As the name implies, these species have teeth to hunt prey with.

There are three species in the sperm whale family, including the largest toothed predator in the world and smallest whale in the world. A common characteristic of these species is the spermaceti, a semi-liquid waxy white substance filling the 'case' or spermaceti organ in the whale's head, which is thought to be involved in providing ballast for diving and maintaining buoyancy. This may be done by flushing cold water through the nose, hardening the spermaceti, to dive, and pumping warm blood to melt the spermaceti to surface. All three species dive to great depths to find food, although the sperm whale is believed to dive much deeper than either of its smaller cousins. Sperm whales eat squid, fish, and even sharks.

There are 22 recognized species of Beaked Whales, toothed whales notable for their elongated beaks. Of air breathing animals, beaked whales are some of the most extreme divers. Cuvier's beaked whales regularly dive for an hour at a depth over 1,000 m (3,300 ft), and the longest and deepest foraging dive recorded is 137.5 minutes and 2,992 m (9,816 ft).

Beaked whales are one of the least known groups of mammals because of their deep-sea habitat, mysterious habits, and apparent low abundance. Only three to four of the 22 species are reasonably well-known. Baird’s and Cuvier's beaked whales were subject to commercial exploitation, off the coast of Japan, while the Northern bottlenose whale was extensively hunted in the northern part of the North Atlantic late in the 19th and early in the 20th centuries.

Porpoises are small cetaceans that are distinct from dolphins, although the word "porpoise" has been used to refer to any small dolphin, especially by sailors and fishermen. The most obvious visible difference between the two groups is porpoises have spatulate (flattened) teeth distinct from the conical teeth of dolphins. Porpoises rear more young more quickly than dolphins. They have small flippers, notched tail flukes, and no beaks. All carry at least 11 pairs of small teeth in their upper and lower jaws.

Porpoises, divided into six species, live in all oceans, mostly near the shore.

River Dolphins are part of the toothed whale group but are uniquely adapted to living in fresh water.

This honor has significant overlap with Marine Mammals. Why not teach or earn them both at the same time?