1. Name at least four characteristics of a crustacean.

Like all Arthropods, Crustaceans have an exoskeleton, a segmented body, and jointed limbs. Most crustaceans have biramous limbs (limbs that branch into two, rather than uniramous, or in a single series of segments), breath through gills, have two pair of antennae, have eyes on stalks, seven or more pairs of limbs, and mouths made up of one pair of mandibles and two pair of maxillae.

There are six classes of Crustacea:

Branchiopoda (this class includes the Triops, which are often available at science and hobby stores in grow-at-home kits)

Malacostraca (this is the group we often think of as crustaceans. It includes crabs, lobsters, true shrimp, krill, amphipods and isopods)

Maxillopoda (including the copepods and the barnacles)

Ostracoda (the seed shrimp, including the so-called "baked beans")

2. What is an exoskeleton?

An exoskeleton is the hard outside covering in crustaceans (and many other animals, including all of the arthropods). In crustaceans, the exoskeleton is made of the protein chitin, reinforced with calcium. Crustacean exoskeletons do not grow with the animal, thus as the animal grows, it must periodically shed (or molt) its exoskeleton. The crustacean is frequently vulnerable following the molt until its new exoskeleton hardens.

If you have ever seen "soft-shell crabs" listed at a restaurant or in a grocery store or fish market, these are crabs who have just molted, but their new exoskeletons have not yet hardened.

3. What phylum does this group belong to?

4. How are the body of these animals divided?

Like all Arthropods, Crustacean bodies are made of three main divisions - the Head, Thorax and Abdomen. In many crustaceans, the head and thorax are fused into a cephalothorax. Each body division can be composed of several segments, each segment often having its own pair of appendages. The abdomen in crustaceans such as shrimp and lobsters is hinged in many segments, allowing them greater flexibility. In crabs, the abdomen is often folded under the animal, making them appear tail-less.

5. In which Bible passages can information be found about consuming crustaceans?

Discussions on eating crustaceans can be found in Mosaic food regulations in Leviticus 11:9-12 and Deuteronomy 14:9-10. God forbids eating them.

6. How are a siri and a crab different? Where can these animals be found?

Siri is another word for swimming crabs, in the family Portunidae. The five pairs of limbs in crabs are referred to as pereopods. The first pair are the chelipeds, or claws. The next four pair are designed for locomotion. In walking crabs, all four pair are similar, ending in points and used for walking. In swimming crabs (siri), the last pair is flattened and oar-like, allowing the crabs to move through the water. Swimming crabs are found in many marine environments around the world, often in near shore areas with sandy bottoms. Walking crabs are found in both sandy and rocky areas offshore and onshore.

Common swimming crabs (siri) on the U.S. coast include the Blue Crab (Callinectes sapidus) and the Lady Crab (Ovalipes ocellatus).

Ghost Crabs (Ocypode sp.) and Blue Land Crabs (Cardisoma guanhumi) are common land crabs along the U.S. south and east coasts. Most types of Fiddler Crabs (the male frequently has one claw much larger than the other) are also considered land or terrestrial crabs.

8. How can you tell the difference between a male and female siri? Why is it important?

The tail flap that folds under the abdomen is much wider in female swimming crabs than in male swimming crabs. This wider flap is used for carrying eggs in the female. In the images below, the crab on the left is female, the one on the right male. 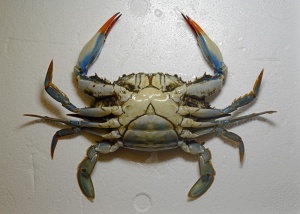 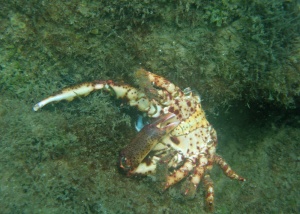 9. What is the importance of small crustaceans for the environment?

Small crustaceans serve several important roles. They are often the first level of consumers in trophic webs, eating algae and phytoplankton, or serving as scavengers eating detritus and other decaying and waste material. As such, they are a critical component in keeping marine environments clean. But small crustaceans are also a very important component of the food webs as a source of nourishment for progressively larger animals, and crustaceans are among the most abundant organisms in numbers and weight in marine environments.

Perhaps the most striking relationship is between the Blue Whale and the crustacean Krill, one of its primary food sources. Blue whales can eat between two and four tons of krill a day, and by some accounts can, in particularly rich waters, gulp an astonishing thousand pounds of krill in a single mouthful.

10. Complete one of the following activities and present an illustrated report:

a. Dissect a shrimp and identify its main parts.

You should be able to acquire shrimp from a local grocery store or fish market. A basic dissection kit is ideal, but you can also use small hobby knives or a razor blade, small scissors, tweezers and toothpicks or bamboo skewers for dissection. Begin with a review of the external anatomy, and the way the various parts cooperate to provide different types of locomotion, protection and feeding for the shrimp. Then you can remove the carapace to see the stomach and heart (in previously frozen shrimp, which are common in the grocery, these organs may be damaged, but are still generally identifiable). Cutting through the shrimp abdomen will allow you to see the gut and the nerves, as well as note the extensive amount of muscle in a shrimp. If you are careful and interested, you can slowly remove the various mouth parts. Shrimp, like many of their cousin Malacostraca, have very complex mouths, with different modified limbs serving to move the food ultimately to the crushing mandibles. 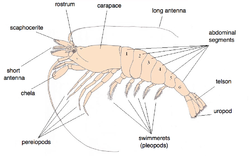 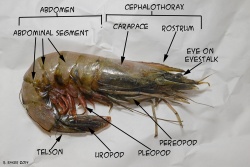 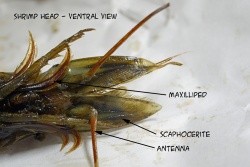 The fist shrimp below has the carapace removed and the gills exposed. The color is due either to black gill disease or to the shrimp living in very fouled water. The second image is a different shrimp with the carapace removed. Note that the internal organs are heavily damaged, due to freezing and thawing, making clear identification more difficult. This is something you may encounter as well with store bought shrimp. 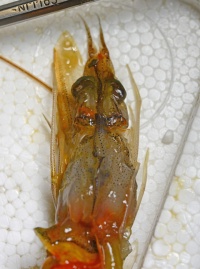 You may also want to dissect a crab, if they are easily available in your local grocery or fish market. (Two fairly comprehensive dissection guide to Blue Crabs can be found at [1] and [2]) Crab internal organs are a bit more robust than those of shrimp, as well as larger, making identification and exploration that much easier. The external anatomy key: 1. Cheliped (modified Pereopod) 2. Second Pereopod 3. Third Pereopod 4. Fourth Pereopod 5. Fifth Pereopod, modified as a swimmerette 6. The Cervical Groove on the Carapace 7. Lateral Spine 8. Propodus (the immovable portion of the Chela (claw) 9. Dactyl (the moveable "finger" of the Chela) 10. The Compound Eyes on eye stalks. 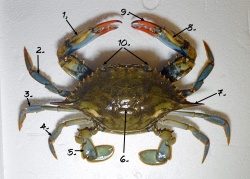 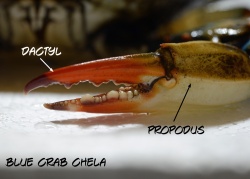 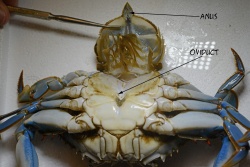 With the carapace removed carefully, you will first be able to see the crab's skin, covering the internal compartment. Once lifted, it reveals the internal organs. The mustard colored organ in the upper left is the hepatopancreas, which has been lifted somewhat to reveal the other organs. The bright orange organ is the ovary. On the left side, the gills are exposed. At the anterior end (near the top of the picture) the odd looking white structure in the center of the crab is the stomach. The final picture shows the thin membrane that covers the gills, keeping them separate from the rest of the internal body cavity. 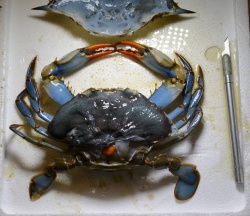 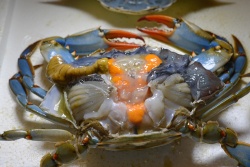 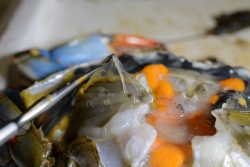 The vertical image below shows the inhalent aperture, the hole behind the claw leading to the gill chamber, where water enters the gill chamber. The second image in this row is the crab (upside down on the board), showing various layers of mouth parts. 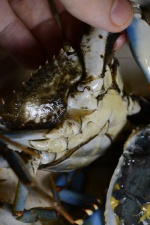 b. In a class, observe various kinds of crustaceans. Sketch at least two of them.

There are many places to find different crustaceans to observe, and the requirement doesn't say your class has to stay in - you may be able to take a field trip to observe many of these different types of crustaceans. A local seafood market should have different live crabs or shrimp species. You can usually find terrestrial isopods (rolly polly bugs/pillbugs) in your back yard. Sea Monkeys are small crustaceans known as brine shrimp, and are often available in hobby, science or toy stores. Triops are another type of crustacean often available as dormant eggs for growing and observing at home. Many pet stores sell terrestrial hermit crabs, and the aquarium departments often have fiddler crabs and different types of shrimp. If you live near the seashore, take your class outside, and see what you can find right on the beach. If they look carefully, they may find different types of crabs, small shrimp, hermit crabs, and amphipods and isopods. While you are out on the beach, consider working on the Marine Invertebrates Honor or the Shells Honor as well.

11. Be able to identify in person or by pictures the following animals: