1. What does the term dinosaur mean? Who used that term for the first time?

The word Dinosaur is a Latinized combination of the Greek roots “deinos” [terrible] and “sauros” [lizard] - so the word means Terrible Lizard. Sir Richard Owen, a British anatomist and taxonomist, coined the term in the early 1840s after determining that a set of fossil bones he studied, including those of Iguanodon and Megalosaurus, were not lizards, but something uniquely different.

There are several common characteristics of dinosaurs that separate them from other reptiles. Dinosaurs are terrestrial, have an upright posture (as opposed to most reptiles with offset limbs), a strong knee and ankle joint, and were diapsids (have two openings in the skull behind the eyes) with an additional hole on each side of the skull in front of the eyes (the antorbital fenestrae) and a hole on each side of the lower jaw (the mandibular fenestrae).

2. Discuss how scientists figure out what live dinosaurs may have looked like, considering that they may have had only a small number of bones / evidence to base their reasoning on.

One of the first steps in dinosaur reconstruction is comparative anatomy. Because bones often have analogous features, functions and articulation, paleontologists can make a first set of assumptions about the size, shape and gait of the dinosaur, even with only a small number of bones. Close investigation of bones can reveal signs of muscle attachment, which can further give shape to the dinosaur. Paleontologists also use comparative anatomy to see basic forms of animals in similar environments, using clues from the rock and other fossils around the dinosaur bones to infer a particular ecosystem, and looking at modern animals that live in similar ecosystems for potential models. In some cases, impressions of skin and feathers can offer some clues as to the external appearance. Although there is no fossilization of color, paleontologists can draw some inferences from patterns and colors in modern animals that live in similar ecosystems or have similar lifestyles.

3. Explain or discuss the following within a group or to an instructor.

a. Why is the Tyrannosaurus Rex considered to have been the king of the dinosaurs?

The Tyrannosaurus rex was the top predator/consumer in its environment. Just as the Lion is the “King” in its modern environment, so too the T. rex and its likes were “King” species. The T. rex was particularly notable for its very large head/jaws which suggest significant biting power, and its large teeth. T. rex is found in Upper Cretaceous deposits in North America. The pictures below showcase the jaws and teeth of this king dinosaur.

What other dinosaurs are also considered dominate “king” species?

Other Tyrannosaurs are considered “King” species, such as the Albertosaurus and Tarbosaurus. The various Carnosaurs, such as Allosaurus (below) and Acrocanthosaurus (whose tracks can be seen in Texas), were also “King” species in their environments.

b. Why did dinosaurs lay eggs?

Many modern reptiles are egg layers, as are modern birds, which according to evolutionists are related to the dinosaurs. Fossilized dinosaur eggs have been found, offering evidence that at least some of the dinosaurs were egg layers.

The dinosaur eggs below are from China:

c. What types of skin did dinosaurs likely have? Give species examples of each.

Although much rarer than fossilized bones, skin prints from dinosaurs have also been found in the fossil record. Many prints highlight bumpy skin, small or large non-overlapping scales and in some species bony plates. Hadrosaurs have some of the best preservation of skin prints, showing non-overlapping bumpy scales, sometimes nearly hexagonal in shape. Dinosaurs like Stegosaurus had bony plates on their skin, possibly for protection, thermoregulation, sexual advertising or a combination of the three. The Ankylosaur had osteoderms - bony projections and plates - embedded in its skin that provided a complete armor coating.

Below are three samples of fossilized Dinosaur skin, from left to right: Hadrosaur skin (displayed at the Melbourne Museum, Australia), Edmontosaurus skin, and Triceratops skin (the latter two displayed at the Houston Museum of Natural Science)

d. What are the sauropodomorphs?

Each of these groups are further sub-divided based on otehr common characteristics. The Saurischians are divided into the Theropods (“Beast-Footed” Dinosaurs) such as Tyrannosaurus Rex and Deinonychus, which were primarily bipedal carnivores, and the Sauropodomorphs (“Lizard-Foot Form” Dinosaurs), which were primarily bipedal and quadrupedal herbivores. The Sauropodomorphs are further subdivided into the primarily bipedal Prosauropods and their much larger and well known cousins the Sauropods, which include the largest of the land animals, such as Diplodocus, Seismosaurus and Apatasaurus.

The Ornithischians are divided into three subgroups: the Thyreophors (armored dinosaurs including the various Ankylosaurs and Stegasaurs), the Marginicephalians (which include the quadrupedal herbivore Ceratopsians like triceratops and the mostly bipedal dinosaurs with thickened skull bones like a helmet, the Pachycephalosaurs) and the Ornithopods (which include the smaller herbivores the Hypsilophodonts, and their larger cousins the Iguanodonts and Hadrosaurs). 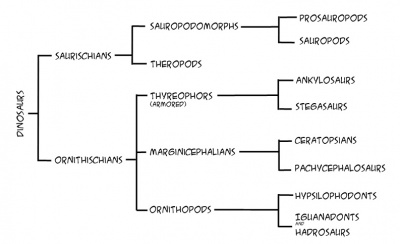 In which two groups are they divided?

Sauropodomorphs are divided into two categories. The smaller prosauropods (“Before Lizard-Foot” Dinosaurs), were mostly herbivorous bipedal early dinosaurs from the Late Triassic to Early Jurassic, including Saturnalia and Thecodontosaurus. The larger Sauropods (“Lizard-Foot” Dinosaurs) in some cases grew to massive size, and were characterized by long necks and tails, relatively small heads, primarily a quadrupedal gait, and a generally herbivorous diet. Sauropods include Apatasaurus (once called Brontosaurus), Brachiosaurus, and Saltasaurus.

e. Why are marine and flying reptiles not considered dinosaurs? Give examples of these creatures.

Dinosaurs are properly those animals included in the Superorder Dinosauria, a group of terrestrial reptiles characterized by their stance, by stronger ankle and knee joints, and by antorbital and mandibular fenestrae. Marine and flying reptiles come from different lines of reptiles.

The flying reptiles (in the Order Pterosaurs, or “Winged Lizards”)

4. Individually or as a group, make a diagram of the food chain of the dinosaurs. Who is supposed to be at the top of the chain? What is the purpose of this dinosaur?

You can combine your research for question 4 and 7. Rather than just a food chain (which is effectively a linear set of connections - a primary producer, a primary consumer, a secondary consumer, perhaps a tertiary consumer), consider a food pyramid (which provides several variations at the base, working up to fewer species at the higher levels - a closer representation to nature than a single line), or a food web, which highlights the complexity of ecological systems.

5. Identify by description and sketches/drawings each of the following species of dinosaurs:

Means "lizard-footed", are an infraorder of saurischian ("lizard-hipped") dinosaurs. They had very long necks, long tails, small heads (relative to the rest of their body), and thick, pillar-like legs. They are notable for the enormous sizes attained by some species, and the group includes the largest animals to have ever lived on land.

Theropods were commonly bipedal, with a relatively large head and a counter-balancing tail. These were primarily carnivorous, and include the Tyrannosaurus Rex.

Ceratopsians (Marginocephalians) were primarily quadrapedal ornithischians, characterized by a bony frill at the back of the head, and often horns on the face.

Examples of Ceratopsians below:

Plesiosaurs were marine reptiles, with an oval body, a long tail and neck, and flippered limbs.

Pterosaurs were flying marine reptiles, with membraneous wings, frequently with short or minimal tails (though not always), and often with counterbalancing horns on their heads.

6. Individually or as a group, research and discuss/present the following:

a. Where the Bible speaks about the creation of the reptiles.

There are a number of other Bible texts that mention reptiles.

b. Evidences that dinosaurs really existed.

Fossils of dinosaurs have been discovered around the world. There are also fossilized dinosaur footprints.

c. The appearance and disappearance of the dinosaurs according to the following theories:

d. What is the evidence that points to the death of the dinosaurs because of the flood?

The Biblical Flood found in Genesis would explain how many dinosaurs could be quickly killed and buried to be preserved as fossils. If an animal dies and is not buried quickly under extreme conditions it does not usually fossilize. Even evolution believing scientists agree that dinosaurs were killed off in a global catastrophe. The big debate is when the catastrophe occurred.

7. Individually or as a group, choose a dinosaur and research size and possible distribution of these dinosaurs, where their fossils were found, their eating, nesting, and community habits, along with other interesting facts about them. Demonstrate your discovery by doing one of the following:

You can work on this research when you investigate question 4. The purpose here is to do more than describe the basic characteristics of the dinosaur, but to consider them in a living environment, as you would with a modern extant animal. This requires study of the plant life, other dinosaurs and other animals that would have lived in the same area, and consider the way they they would have interacted.

b. Make a display chart or poster with descriptions, drawings and images.

c. Make a short video or presentation with descriptions, drawing/sketches, images and sound.

8. Make a collection of ten images of dinosaur fossils and identify the following:

b. Place where the fossil was found

We provide some examples but searching natural history museum websites will yield good information as will searching Wikipedia. Be careful with the scientific estimations of the age of specimans which do not match God's Word. This should be discussed with Pathfinders studying dinosaurs.

The Dino Database ([1]) has a list of museums in the United States that display dinosaurs. Although not necessarily a complete list, this provides a good start to find dinosaur fossils in your area. You may also consider contacting nearby universities, if there are no museums in your area.