1. What part of the world and time of year does the maple sugar industry function and why?

2. Explain how sweet sap is made by the Maple tree and how it is stored over the winter.

Each fall the tree produces its own supply of starch which it stores in its root system during the winter season. In the spring the roots begin to take up water, mixing it with the starch to create sap. The sap rises up the trunk and is distributed to the branches to prepare the tree for the growing season.

3. Identify the Sugar Maple tree by its bark and leaf. 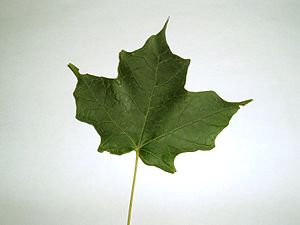 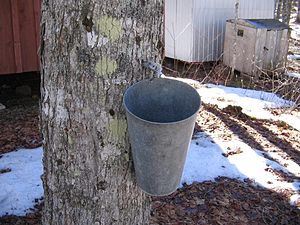 Maple bark, and a tap and syrup bucket

The leaves are the easiest way to identify a maple tree so it is easiest to pick out the trees you are going to tap before they lose their leaves in the fall. The bark of the sugar maple is usually dark brown with vertical grooves and ridges. The easiest way to pick out maple trees without their leaves is to look for a tree that has its branches and buds in opposite position (that is in pairs on opposite sides of a branch) rather than alternate. Four native maples - sugar maple, silver maple, red maple, and black maple - all produce a sweet sap; as does the box elder (ash leaf maple). The Norway maple, a common introduced ornamental in towns, also produces sweet sap.

4. How deep into a Maple tree does one drill for best results?

The diameter of the hole really ought to be matched to the size of the tap. Taps are tapered, so the hole diameter should fall somewhere between the smaller and larger ends of the tap. If the hole diameter is too large, the tap may fall out of the hole. This is especially true if a bucket is suspended from the tap (some are designed for that). In this case, the more sap that flows into the bucket, the heavier it gets, making it even more likely that the tap will pull out. For insurance, you might consider tying a rope around the tree, catching (and thus securing) the tap.

5. How long does it take for a healthy Maple tree tap's hole to heal?

It heals within a few weeks after the sap season.

6. How close to an old tap hole can a new tap hole be made?

7. How many taps can be made on a healthy Maple tree without injuring it?

none on trees less than 10 inches. One if at least 10 inches.

8. Tell how maple sugar is made from maple syrup.

Maple syrup is ready when the boiling temperature reaches about 7 degrees above boiling point of water (e.g. 218o F. in Michigan). If you continue boiling until the temperature reaches 30 to 33 degrees F. above the boiling point of water(e.g. 241 to 244o F. in Michigan) and then stir the syrup vigorously it will start to crystallize. At this point you put it into whatever molds or containers you wish before it hardens too much in the pan.

9. What is the ideal weather for sap to flow?

Warm sunny days above freezing and cold nights below freezing.

A full well-proportioned tree in the summer will be a more healthy tree and will produce a better quality and quantity of sap the next spring.

11. On an average, how much sap is needed to produce one gallon of syrup?

13. Observe and explain what the following maple sugaring equipment is used for: 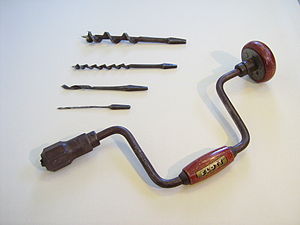 Also called a brace, the drill holds the bit that bores the hole in the tree. Many syrup producers still use these traditional "cordless" tools, though others use battery powered ones instead. A regular "corded" drill is not useful unless the tree is near an outlet. In most maple-producing areas, the trees cover a vast area, and would require thousands of feet of extension cords (which would have to be wound through the forest). It is far,less labor to use a brace and bit than to run wire and then collect it again after the holes are bored. 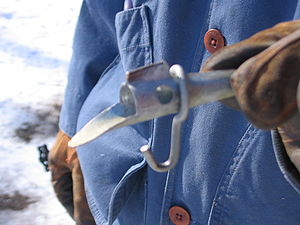 Metal spigot. The hook hanging from it is for holding the bucket.

The spigot is inserted into tap hole to direct the sap from the tree into the bucket. The bucket hangs from it. In the old days these could be made from elderberry branches, as that species of tree has a pithy center in the branches and is easily removed to make a channel for the sap to flow through. They can also be made from 1/2 inch dowel with a hole drilled in it. Metal versions are far more common today than wooden ones, and plastic spigots are more common than metal ones, as they allow the syruper to run plastic tubing from tree to tree to greatly reduce the labor involved in sap collecting.. 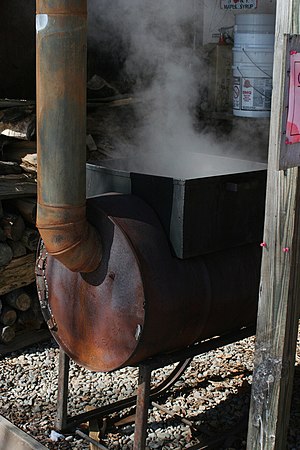 The bucket is used to collect sap. Most sap buckets are made of metal, but it is possible to use a plastic milk jug. Modern producers often pipe the sap into a large tank at a central collection area.

The bucket cover is used to keep out rain and foreign material. Rain would dilute the sap and require more boiling. The lid is loose-fitting, so it will not keep out insects. Insects are not typically active during sapping season, and when there are enough of them to become a concern, it's about time to quit production anyhow.

The evaporator is used to boil sap so the excess water in the sap is driven off leaving the maple syrup or sugar. Commercial operators have huge evaporators costing thousands of dollars. For small scale production, you can boil it down in the kitchen, but be warned - this will cause a lot of moisture to condense on surfaces in the kitchen. If you have an oven vent that exhausts to the outdoors, use it! You can also boil it down in a kettle on an outdoor barbecue grill.

If you attempt to boil it down in a kettle over an open fire without an evaporator, you can easily ruin the sap by getting smoke in it (yes, it happens).