1. What is marine algae?

The most common name for marine algae is "seaweed". Seaweeds are popularly described as plants, but biologists do not consider them plants (in biology, all true plants belong to the kingdom Plantae). They should not be confused with aquatic plants such as seagrasses (which are vascular plants).

Marine algae are mostly found in shallow ocean water near rocky shores. It is also found in fresh water, such as ponds, lakes, and rivers.

3. What is the organ of attachment to the substratum called? How does it differ from a true root?

4. How does size vary in marine algae?

Some marine algae are so small they can only be seen under a microscope. Others are very large, such as Macrocystis, a species of kelp belonging to the brown algae group, which may reach 60 meters

5. Name the four groups of marine algae, indicating opposite the name of each group whether it is unicellular, multicellular, or both.

6. Is most green algae found in fresh or salt water?

While about 90% of the species of green algae live in freshwater habitats and most of the other 10% live in marine habitats, other species are adapted to a wide range of environments. Watermelon snow, or Chlamydomonas nivalis, of the class Chlorophyceae, lives on summer alpine snowfields. Others live attached to rocks or woody parts of trees. Some lichens are symbiotic relationships with fungi and a green alga.

Diatoms are a major group of algae, and are one of the most common types of phytoplankton. Most diatoms are unicellular, although some form chains or simple colonies. A characteristic feature of diatom cells is that they are encased within a unique cell wall made of silica (hydrated silicon dioxide) called a frustule. These frustules show a wide diversity in form, some quite beautiful and ornate, but usually consist of two asymmetrical sides with a split between them, hence the group name.

Diatoms are a widespread group and can be found in the oceans, in freshwater, in soils and on damp surfaces. Most live in open water, although some live as surface films at the water-sediment interface, or even under damp atmospheric conditions. They are especially important in oceans, where they are estimated to contribute up to 45% of the base of the oceanic food chain.

8. Where does algae grow-the polar, temperate, or tropic zone?

Algae grow in all of these zones, from Picobiliphytes, which are an algae indigenous to polar regions, to Sargassum, which lives in the tropical waters of the Atlantic Ocean.

9. Where is brown algae most invariably found-in fresh or salt water?

Brown algae is found in most salt water ecosystems.

10. What is the greatest depth that algae grows in the ocean? Why can it not grow in deeper water?

The deepest living algae are those that are attached to the sea-bed under several meters of water. The limiting factor in such cases is the availability of sufficient sunlight to support photosynthesis. The deepest living seaweeds are the various kelps.

11. Name the three parts of a large kelp. How do they compare to the leaf, stem, and root of a plant? 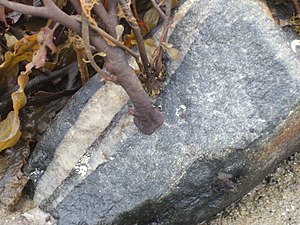 A marine algae showing the holdfast, some stipes, and some blades

Most forms of algae reproduce sexually by forming spores. The spores, when cast off the adult organism, develop into male and female gametes which carry only half the genetic information of the parent organism. These gametes are motile, meaning they can move around by themselves, propelled by tiny flagella. When male and female gametes from the same or from different parent organisms combine, the genetic material fuses to create an organism with a full complement of genetic material. This is very similar to the way that ferns reproduce (see the Ferns honor for more details.

Asexual reproduction is advantageous in that it permits efficient population increases, but less variation is possible. Sexual reproduction allows more variation but is more costly because of the waste of gametes that fail to mate, among other things. Often there is no strict alternation between the sporophyte and gametophyte phases and also because there is often an asexual phase, which could include the fragmentation of the thallus.

13. What are some of the commercial values of algae? Give at least one for each group.

Food
Most cultures with access to Porphyra, a genus of red algae use it as a food or somehow in the diet, making it perhaps the most domesticated of the marine algae. It is known as laver, nori sushi (Japanese), amanori (Japanese), zakai, gim sushi (Korean), zicai (Chinese), karengo, sloke or slukos. In Japan, the annual production of Porphyra spp. is valued at 100 billion yen (US$1 billion).

Emulsifier
Gelatinous extracts of carrageen seaweed (also known as Irish moss, a red algae) have been used as food additives for hundreds of year. It acts as an emulsifier, which is to say, it help combine items which resist combination, such as oil and water. It is commonly used in toothpaste, ice cream, milkshakes, sauces, and even shampoo (which we admit is not a food).

Fertilizer
Seaweed, particularly bladderwrack, kelp or laminaria (which are all forms of brown algae), can be either applied to the soil as a mulch (although it will tend to break down very quickly) or can be added to the compost heap, where it is an excellent activator.

Medicine
Laminaria (a genus of brown algae) is used in the production of potassium chloride and iodine. Dried laminaria sticks can be used medicinally to induce dilation of the cervix. An additional medicinal use of algae is the product agar which is used as a culture medium for growing bacteria in laboratory settings.

Pigments
The natural pigments produced by algae can be used as an alternative to chemical dyes and coloring agents. Many of the paper products used today are not recyclable because of the chemical inks that they use, paper recyclers have found that inks made from algae are much easier to break down. There is also much interest in the food industry into replacing the coloring agents that are currently used with coloring derived from algal pigments. In Israel, a species of green algae is grown in water tanks, then exposed to direct sunlight and heat which causes it to become bright red in color. It is then harvested and used as a natural pigment for foods such as Salmon.

14. Make a collection of at least twenty specimen of marine algae properly identified, mounted, and labeled. There must be at least four specimens from the Green group, eight from the Brown group, and eight from the Red group.

The best approach for meeting this requirement is to obtain a field guide to algae, go out to a beach, and collect the various types you find. Once you have a specimen, use the field guide to try to identify it. Continue collecting until you have at least 20 specimens you can identify, being absolutely sure to remove any animals living in the algae before you leave the area. You can collect the specimens in a bucket or keep them in plastic bags.
You will need to start the drying process right away. For this you will need:

Many types of algae have natural adhesives in them that will cause them to stick to the mounting paper all by themselves. For those that do not, a small dot of white glue may be used to affix them to the mounting paper. Label with the information collected about the specimen.

15. Be able to identify by generic name at least ten types of marine algae.

The "generic" name in the requirement means that you should learn which genus ten specimens belong to. Don't be scared of the scientific names (Latin names) - they are no more difficult to learn than the common names, especially if you know neither when you start.
We present several species below, but you should not expect that these are the only samples you will find. Get a good field guide and identify the algae you find rather than trying to find the algae you can identify.