Odonates are an order of insects that is divided into 3 groups or suborders: Dragonflies and Damselflies and a third minor suborder. Enthusiasts generally refer to them as “Odes”. Dragonflies are important predators that eat mosquitoes, and other small insects like flies, bees, ants, wasps, and very rarely butterflies. They are usually found around marshes, lakes, ponds, streams, and wetlands because their larvae, known as "nymphs", are aquatic. Though dragonflies are predators, they themselves are subject to predation by birds, lizards, frogs, spiders, fish, water bugs, and even other large dragonflies. Therefore these insects are an important part of the food chain.

2. Know how many species of damselflies and species of dragonflies are in your Country (or State/Province) and Continent and Worldwide.

3. How do dragonflies and damselflies differ? 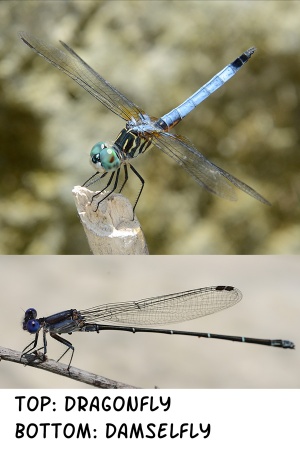 These two groups can easily be separated by 2 characteristics: the Damselflies are much smaller and frailer built, and hold their wings folded when resting rather than open as among the dragonflies (except for the Spreadwings which are damselflies that hold their wings open). In general, Damselfly eyes are widely separated on their heads, whereas Dragonfly eyes normally touch at least at one point.

4. What separates Odes from other insects?

Odonates can be distinguished from all other insects by:

Other orders of insects that might be confused with Odonates are: Mayflies, Stoneflies, Lacewings and Ant Lions, and Caddis flies.

6. Describe and draw the life cycle of an ode.

Odonates have what is considered a simple cycle of egg—larva—adult.

Eggs are generally laid in or sufficiently near water where water will soon rise and cover. Generally they hatch in about a week although eggs lie in or near temporary pools will hatch sooner or even be delayed several months. The females of some damselflies will actually submerge themselves for an hour or more while laying her eggs. Female dragonflies lay eggs in or near water, often on floating or emergent plants. When laying eggs, some species will submerge themselves completely in order to lay their eggs on a good surface. The eggs then hatch into nymphs. Most of a dragonfly's life is spent in the nymph form, beneath the water's surface, using extendable jaws to catch other invertebrates (often mosquito larvae) or even vertebrates such as tadpoles and fish. They breathe through gills in their rectum, and can rapidly propel themselves by suddenly expelling water through the anus. Some nymphs even hunt on land.

The larvae, called nymphs or naiads will use most any kind of temporary or permanent aquatic habitat. Some will even survive in moist substrates under rocks in otherwise dry streambeds or ponds. They do not look at all like the adults they will become and will molt their exoskeletons between 7 and 18 times in a period of a few months to several years before the final change comes into adulthood. The larval stage of large dragonflies may last as long as five years. In smaller species, this stage may last between two months and three years. When the larva is ready to metamorphose into an adult, it climbs up a reed or other emergent plant. Exposure to air causes the larva to begin breathing.

Sexual maturity will be reached within a few hours to over a week depending on the species. During this time they continue their habit of being very voracious eaters consuming large numbers of mosquitoes, other small insects and even other Odonates.The skin splits at a weak spot behind the head and the adult dragonfly crawls out of its larval skin, pumps up its wings, and flies off to feed on midges and flies. In flight the adult dragonfly can propel itself in six directions; upward, downward, forward, back, and side to side. The adult stage of larger species of dragonfly can last as long as five or six months. During this time they are voracious eaters of most anything that moves under water from mosquito larvae to even small fish and amphibians. The change from larva to adult may take a few hours to a few days. The nymph will climb out of the water as far as 30 meters horizontal and 10 meters vertical. Emergence generally occurs at night but some species are diurnal. A split will develop down the back and the adult will then slowly pull itself free of the old larval shell. As it does so, the new exoskeleton slowly hardens, the wings extend and harden. Once it is fully hard it is ready for flight.

A term used in biology to describe the remains of an exoskeleton that is left after an arthropod (insect, crustacean or arachnid) has moulted. The exuvia of an animal can be important to biologists as it can often be used identify the species of the animal and even its sex.

A type of photoreceptor organ in animals. Also called "simple eyes", ocelli are miniature eyes capable of sensing light but not distinguishing its direction. See also stemmata, which are structurally similar. Ocelli are found in many invertebrates. Insects in particular have two types of ocelli, dorsal ocelli and lateral ocelli.

A term used to describe animals that are primarily active during the twilight -- at dawn and at dusk.

Paired appendages on the rear-most segments of many arthropods, including insects and arachnids but not crustaceans.

A "bloom" caused by pigment on top of an insect's cuticle that covers up the underlying coloration, giving a dusty or frosted appearance. The pruinescence is commonly white to pale blue, but can also be gray, pink, purple, or red; these colors may be produced by Tyndall scattering of light. When pale in color, pruinescence often strongly reflects ultraviolet.

The veins which run throughout the wing tissue. These veins are extensions of the body's circulatory system. 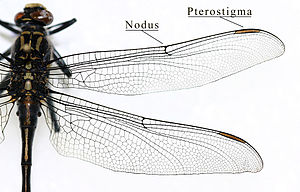 The many boxes formed by wing veins. They are nearly transparent in dragonflies.

Eyes which consist of many light-sensitive lens, each with its own refractive system and each forming a portion of an image.

They have a long abdomen with 10 visible segments, which terminate in clasping organs in both sexes.

The part where the wings are attached.

A fused mouthpart that forms the floor of the mouth of an insect.

The wings closer to the head

The pterostigma is a cell in the outer wing of insects which is often thickened or coloured and so stands out from other cells. It is particularly noticeable in dragonflies, but present also in other insect groups, such as snakeflies, hymenopterans and megalopterans. The purpose of the pterostigma, being a heavier section of the wing in comparison to nearby sections, is to assist in gliding. Without the pterostigma, self-exciting vibrations would set in on the wing after a certain critical speed, making gliding impossible. Tests show that with the pterostigma, the critical gliding speed is increased 10-25% on one species of dragonfly.

The wings closer to the tail.

The anterior, uppermost part of the head of an insect.

8. Of what value are odes and why should we study them?

As mentioned above, their eating habits make them one of nature’s most beneficial insects from man’s perspective. Their value in mosquito control is immeasurable. They are among some of the most colorful, eye-catching and attractive of all insects. They also are a good indicator of the environmental conditions in their breeding habitat.

9. Identify and observe at least 15 species of Odonates. Record their location, habitat and date of finding.

Since there are over 5900 species in the world and perhaps several hundred where you live, A good field guide will come in handy.

10. Demonstrate how to properly catch and release an Odonate without injuring it.

The first step is to find an Odonate. The best way is to use a net, as catching with hands has a high failure rate and is likely to injure the insect.

Method #1: The SWING METHOD is for flying insects. Swing the net like a baseball bat and try to catch the dragonfly in it. Follow through on your swing, especially with flying odonates, (like a tennis serve or golf swing) so that the dragonfly is completely in the net and can't fly out. As you end the swing, close the net by rotating the net handle.

Method #2:The PANCAKE METHOD is for resting insects. Just put the net over the insect. Once you've trapped the dragonfly, hold the net flat on the ground and lift the closed end of the net with your hand. Usually the dragonfly will fly up into the net. Than grab the net below the dragonfly and close it to keep the dragonfly in.

Like most things, the best way to catch a dragonfly is from behind. If possible avoid allowing your shadow to fall across the insect since their view is blocked directly to the rear. It is also best to swing at flying insects from behind if possible for the same reason and it avoids having the dragonfly crash head-on into the net.

Now you need to remove the dragonfly from the net. Try to get all 4 wings and hold them together above the ode's back. Then gently take the bug out of the net. Be careful. Remember the idea is to not injure the insect. It is possible to pull off a leg or the head (especially if it is biting the net) You also do not want to get hurt. Dragonflies can bite fingers and it can hurt.

After capturing the insect, examine it briefly with a hand lens. When finished, release the dragonfly or damselfly into the air or place onto a perch.

If you are not planning to immediately release the dragonfly, plan where you are going to keep your dragonfly and what you plan to do with it beforehand. The longer a dragonfly is held in captivity, the less likely its chance for survival. If you must keep it for an extended period of time keep it in a dark cool place, preferably a cooler. The bug's metabolism will slow down and his color will sometimes change dramatically. Once it is again brought to outdoor temperatures the normal color will come back, but usually after the dragonfly has flown away.

Dragonflies are more easily caught during certain times. Some species are more active during the mornings and some during the evening, so knowing these details about the species can help. Feeding time is a distracted time so that can be a good catch time. Dragonflies are also slower fliers in cool weather when their wings tend to be slower to warm up for flying and their reflexes are reduced.

There are some families, notably the Cruisers and Spiketails and also a few Darners, who routinely patrol up and down streams and rivers keeping to the same flight paths even when you are near them. If you wait patiently anticipating their next patrol, you stand a very good chance of netting them. Source