1. Define the characteristics of an orchid. 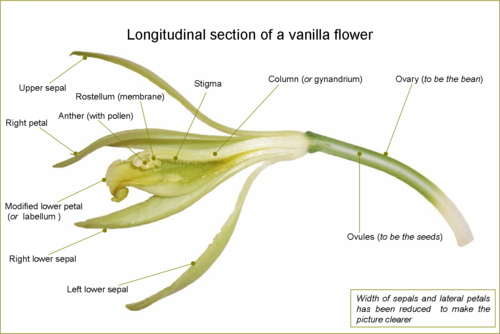 Longitudinal secion of a flower of Vanilla planifolia

Orchids are monocot plants characterised by the presence of three sepals , two petals and the third petal modified as a lip.

2. What are the two main groupings of orchids? Name and show examples of each from a live plant or picture.

There are five identified groupings of orchids. (Also see Taxonomy of the Orchid family)

The last two, Epidendroideae and Orchidoideae are the largest subfamilies (main groupings).

3. What are the differences between epiphytic, parasitic, and saprophytic orchids?

An epiphytic is an organism that grows upon or attached to a living plant.

Parasitic is symbiosis or "living together", a phenomenon in which two organisms which are unrelated co-exist over a long period of time, usually the lifetime of one of the individuals. A parasitic relationship does not benefit the host and can, in fact, be detrimental to it.

A saprotroph (or saprobe) is an organism that obtains its nutrients from non-living organic matter, usually dead and decaying plant or animal matter, by absorbing soluble organic compounds. They cannot make food for themselves.

4. Discuss the distribution of orchids, making particular reference to the occurrence of these in your area.

Orchids are cosmopolitan, occurring in almost every habitat. The great majority are to be found in the tropics, mostly Asia, South America and Central America. They are found above the Arctic Circle, in southern Patagonia and even on Macquarie Island, close to Antarctica.

The following list gives a rough overview of their distribution:

5. Name the main cultivated genera of orchids. Identify three from plants or picture. What is cultivar?

Most cultivated orchids are tropical or subtropical, but quite a few which grow in colder climates can be found on the market.

Temperate species available at nurseries include:

The main cultivated genera of orchids is Epidendroideae.

6. Discuss the main essentials to observe in the cultivation of orchids. Grow at least one orchid for at least six months.

The Wikipedia article Hippeastrum has detailed instructions for growing this orchid throughout the year. Another common houseplant orchid is the Cymbidium.

Another option is to grow your orchids using hydroponics, which satisfies a requirement of the Voyager curriculum. Again Wikipedia has an article called "Hydroponics for orchid cultivation" which is filled with important details.

Have a fun time growing your orchid(s).

7. What are the main uses of orchids? What orchid is used commercially?

What orchid is used commercially?

8. Know the laws in your area (if any) that protect wild orchids.

Reason for Concern: Navasota ladies-tresses is endemic to the Oak Woodlands and Prairies region of east-central Texas. Once thought to be extremely rare, it is now known to be locally common in parts of its range. However, many of the sites are near an active coal stripmining operation. Other sites are within the area of Bryan-College Station and are threatened by the rapid development of this metroplex.

Cypripedium acaule, or Pink Lady's Slipper, is endangered in Nova Scotia, Canada, and in the U.S. States of Georgia, Tennessee, Illinois, and New York. Because of a fungus association needed for growth, and the high acid this plant needs, C. acaule is very difficult to grow in the average garden and is unlikely to survive any attempts at transplantation. It should not be removed or disturbed if found in nature.