1. What characteristics must an animal have to be classed as a reptile?

Reptiles are cold blooded animals. They are thick-skinned. Most have scales and reproduce by egg-laying, but several give birth to live young. The lack of a larval stage distinguishes reptiles from amphibians.

2. Name 15 reptiles (lizards, snakes, and/or turtles) found in your locality. Tell where they live, their food habits, and their economic importance.

Reptiles also include alligators and crocodiles, so if those animals can be found in your area, they should be named.

eNature.com is a good resource for this. You can search local wildlife by zip code, and it also gives information about each animal.

You may also wish to review the Wikibooks Field Guide to Reptiles, though as of this writing, it is still very much in its infancy.

3. Name five venomous reptiles of your area describing each as to the location of their fangs and geographical distribution.

Some geographic areas have no venomous reptiles, so we choose to interpret "geographic area" as representing an entire continent.

4. Tell what to do if you are bitten by a venomous snake.

Snakebite first aid recommendations vary, in part because different snakes have different types of venom. Some have little local effect, but life-threatening systemic effects, in which case containing the venom in the region of the bite by pressure immobilization is highly desirable. Other venoms instigate localized tissue damage around the bitten area, and immobilization may increase the severity of the damage in this area, but also reduce the total area affected; whether this trade-off is desirable remains a point of controversy.

Because snakes vary from one country to another, first aid methods also vary. As always, this article is not a legitimate substitute for professional medical advice. Readers are strongly advised to obtain guidelines from a reputable first aid organization in their own region, and to be wary of homegrown or anecdotal remedies.

However, most first aid guidelines agree on the following:

Many organizations, including the American Medical Association and American Red Cross, recommend washing the bite with soap and water. However, do not attempt to clean the area with any type of chemical. Australian recommendations for snake bite treatment strongly recommend against cleaning the wound. Traces of venom left on the skin/bandages from the strike can be used in combination with a snake bite identification kit to identify the species of snake. This speeds determination of which antivenin to administer in the emergency room.[1]

5. Tell what to do if you are bitten by a non-venomous snake.

Treatment of a non-venomous snakebite is essentially the same as the treatment for other types of puncture wounds. Clean the wound, cover it with a sterile bandage, and seek medical attention.

a. Tell the life history of one representative of each: lizard, snake, turtle. Compare lizards, snakes, turtles, and crocodiles as to life history, variation in eyes and ears, teeth, heart, lungs, limbs, tails, and scales (shells).

Life History of the Leopard Gecko

Leopard Geckos become sexually mature at around 10-14 months of age. The Leopard Gecko's gender can be determined once the animal reaches an adult length of 5+".

Leopard Geckos breed from March through September, although the season may begin as early as January and finish as late as October. Thirty days later, the female will lay one or two eggs with a leathery shell. Clutches of two eggs will then be laid every two weeks to monthly throughout the rest of the mating season varying from each gecko according to age, with older females gradually laying fewer eggs with each year. The eggs will need to be incubated.

The eggs hatch 6-12 weeks after being laid depending on temperature. The gecko breaks the surface of the egg and pushes its head out, remaining in this position from 2 to 4 hours adapting to lung breathing and obtaining oxygen from the egg membranes as well as absorbing yolk from inside the egg. 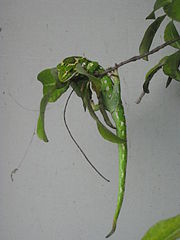 Along with the New Caledonian rough-snouted gecko (Rhacodactylus trachyrhynchus) all New Zealand Gecko give birth to live young. The eggs hatch in the oviduct and a birth occurs. Each litter consists of two young. After three years, or depending on temperature and food availability causing them to grow to a good size, they become sexually mature. Mating occurs in September-October, and birthing in May-June.

Life History of the Garter Snake

Before they mate, garter snakes go into brumation, which is a state similar to hibernation. They stop eating for about two weeks beforehand to clear their stomach of any food that would rot there otherwise. Garter snakes begin mating as soon as they emerge from brumation. In chillier parts of their range, male common garter snakes awaken from brumation first, giving themselves enough time to prepare to mate with females when they finally appear. After mating, a female leaves the den/mating area to find food and a place to give birth. Female garter snakes are able to store the male's sperm for years before fertilization. The young are incubated in the lower abdomen, at about the midpoint of the length of the mother's body. Garter snakes are viviparous, meaning they give birth to live young. Gestation is two to three months in most species. As few as 3 or as many as 50 snakes are born in a single litter. The babies are independent upon birth.

Life History of the Leatherback Turtle

Like all sea turtles, leatherback turtles start their lives as hatchlings bursting out from the sands of their nesting beaches. Right after they hatch, the baby turtles are already in danger of predation. Many are eaten by birds, crustaceans or other reptiles before they reach the water. Once they reach the ocean they are generally not seen again until maturity. Very few turtles survive this mysterious period to become adults. It is known that juvenile leatherbacks spend a majority of their particular life stage in more tropical waters than the adults.

Adults are prone to long-distance bouts of migration. Migration in leatherback turtles occurs between the cold waters in which mature leatherbacks cruise in to feed on the abundant masses of jellyfish that occur in those waters, to the tropical and subtropical beaches in the regions where they were hatched from. In the Atlantic, individual females tagged in French Guiana off the coast of South America have been recaptured on the other side of the ocean in Morocco and Spain.

Mating between leatherback turtles take place at sea. Leatherback males never leave the water once they enter it unlike females which crawl onto land to nest.

While the other species of sea turtles almost-always return to the same beaches they hatched from, female leatherback turtles have been found to be capable of switching to another beach within the same general region of their "home" beach. Chosen nesting beaches are comprised of soft sand since their shells and plastrons (the turtle's underside) are softer and easily damaged by hard rocks. Nesting beaches also have shallower approach angles from the sea. This is a source of vulnerability for the turtles because such beaches are easily eroded. Females excavate a nest above the high-tide line with their flippers. One female may lay as many as nine clutches in one breeding season. About nine days pass between nesting events. The average clutch size of this particular species is around 110 eggs per nest, 85% of which are viable. The female carefully back-fills the nest after, disguising it from predators with a scattering of sand.

b. Keep a small reptile in a terrarium and maintain a record of its care for three months.

Most pet shops carry turtles, lizards, and snakes, as well as the equipment needed to care for them (including terrariums). Pet store staff are generally very knowledgeable about caring for reptiles and will be able to answer your questions. They may also have brochures on reptile care.

Remember that pet reptiles (and amphibians, birds, and small mammals) should never be released into the wild. The main reason for this is that they may not be indigenous to the area and may cause severe ecological problems to the native populations. Further, they can easily spread disease to the native creatures. Even if none of these things come to pass, domestic pets are ill-equipped to survive in the wild, having not lived there in their past.

Therefore, in deciding whether or not to keep a pet reptile to meet this requirement, take this into consideration. If you misjudge your commitment to your reptile pet, you are responsible to find it another home. Under no circumstances should you release a pet into the wild.

7. Locate two Bible stories in which a reptile played an important part.

Paul was bitten by a viper, which he shook off into the fire. The people thought he was a god since he didn't die. (Acts 28)