Rivers and streams are bodies of fresh water that are flowing. Ponds and lakes contain freshwater but are not flowing. Most other aquatic biomes contain salt water.

A rather large naturally occurring flowing body of water.

A naturally occurring flowing body of water, which is smaller than a river.

A flowing body of water, which is smaller than a stream.

A flowing body of water, which is smaller than a creek or brook.

A slang term used in place of creek or brook.

The place where water exits the river and enters another body of water.

The place where the flowing fresh water meets the sea or ocean.

The source of a stream or river.

The area of land a particular river drains water from.

A line joining the highest points of land from which water ultimately flows into different oceans.

A shallow place in a river or stream, which flows rapidly and shows a rippled surface.

A fast part of a river or stream usually with rocks showing above the water level.

rapids cause the water to bubble and froth with the general color of white.

Particles of fine sand eroded from the stream or riverbed, which are suspended in the water giving it a brown or gray color.

Clay, silt, sand, gravel, or other detritus, which a river or stream carries from one place to another.

Where an intermittent stream ends at the end of a gorge onto a plain leaving a fan-shaped pile of alluvium.

The deposit of alluvium usually at the mouth of a river. The river splits into many different slow-flowing channels that have muddy banks. New land is created at deltas. Deltas are often triangular-shaped, hence the name (the Greek letter 'delta' is shaped like a triangle).

Anything that lives, relates to, or located in or near a river or stream.

Differences in the Water

Differences in the Species

The answers here for the North American continent only. You can use this map to label; the second map that follows is labeled. 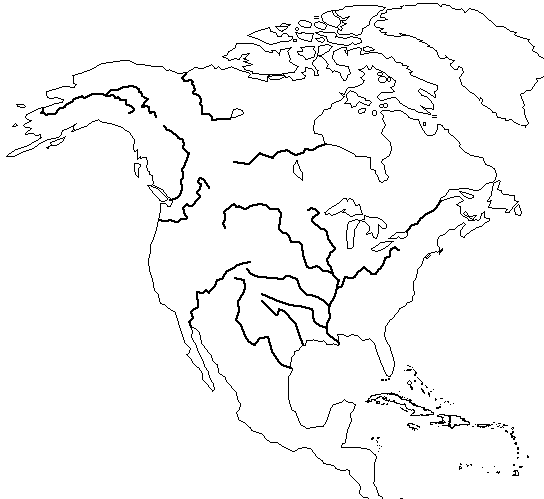 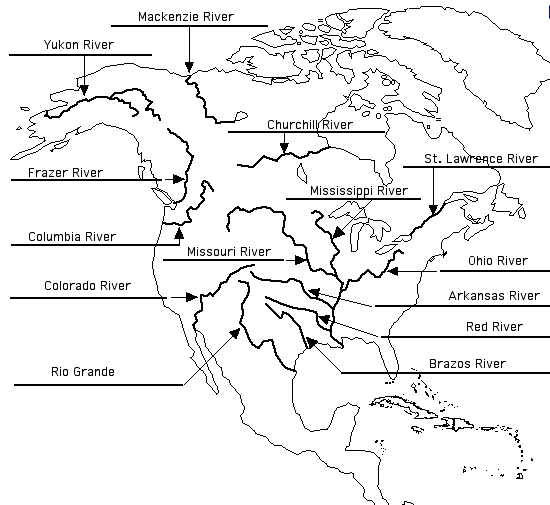 An oxbow lake is crescent-shaped lake lying alongside a river. The oxbow lake is created over time, as erosion and deposits of soil change the river's course. On the inside of a loop, the river travels more slowly depositing silt. Meanwhile the outside edges tend to flow faster, which erodes the banks making the loop even wider. Over time the loop of the meander is removed from the river's current. Without the current to move the water, sediment builds up along the banks and fills in the ends of the lake. A horseshoe-shaped “oxbow lake” is formed.

Three examples are given below. There are many others. Try to choose on that is near your location.

Purple Loosestrife is a perennial aquatic plant, which flowers in late summer to early fall. It has reddish purple to magenta flowering spikes top somewhat square stems that can grow to nine feet tall. There are many members of the loosestrife family, Lythraceae, 12 are found in the continental US with 3 being introduced: Lythrum hyssopifolia, L. salicaria, and L. virgatum.. Purple loosestrife is detrimental because it is invasive and competitive. It crowds out native plants that are used by native wildlife for ground cover, food and nesting material. Normally our wetlands are a complex mosaic of many species with high diversity that provide excellent habitat for many species of birds, mammals, and fish. The only way to save the water way is to dredge up the root systems, whoever there are always some left to reproduce.

Zebra mussels were brought from the Black Sea region just before 1986 to Lake Erie in the ballast water of a ship. They were discovered when they completely clogged the water intake pipe for a Monroe, Michigan community. They have since spread through all the great lakes and to the Gulf of Mexico. They are also in many inland lakes, most likely due to spread on recreational boats. The zebra mussels attach to the outside of the native mussels and smother them. They have changed the food web of the lake system. They have clarified the water to the degree that algae can thrive to a depth of 60 feet. When the algae bloom naturally dies off, there is a lot more to die and when it does, it is washed up on the beach and smells like raw sewage. Scraping the mussels off boat and water pipes is about all that can be done. The numbers seem to be declining since the waters in the great lakes have cleared up since the mussels have arrived.

Asian Carp were imported by catfish farmers in the 1970’s to remove algae out of their ponds. During floods in the 1990’s some of the catfish escaped when the ponds overflowed into the Mississippi River. They have moved north toward the Great Lakes. Dams are being build to try to limit their spread. They grow very fast and very large (100 pounds) and eat the food, which the native fish normally eat. It remains to be seen what will happen to the native fish.

This brown or yellowish-brown freshwater mussel is about 1.5 inches in length. Their life span is about 10 years. They feed on algae and other suspended particulates. These mussels live in running water of small brooks to large rivers, mostly on the East Coast. Water pollution, including sediments and chemicals from agriculture and other development projects such as golf courses, have been implicated in the mussel's decline.

The interior population of the least tern breeds in isolated areas along the Missouri, Mississippi, Ohio, Red, and Rio Grande river systems. From late April to August, terns use barren to sparsely vegetated sandbars along rivers, sand and gravel pits, or lake and reservoir shorelines. Terns nest in a shallow hole scraped in an open sandy area, gravelly patch, or exposed flat. Dams, reservoirs, and other changes to river systems have eliminated most historic least tern habitat. Recreational activities on rivers and sandbars can disturb the nesting terns, causing them to abandon their nests.”

These bottom-feeding fish like large, silty rivers with rocky or sandy bottoms. They can be found in backwaters, side channels, sloughs, and in the main channels. The werwe once located throughout the Missouri River from Montana to the Mississippi River and then south to Louisiana. Now, most of the Pallid Sturgeon’s habitat has been altered by dams, reservoirs, and channelization.

“This plant is found on moist, sandy floodplains and prairie wetlands along the Illinois River. Although not very tolerant to prolonged flooding, the plant relies on periodic flooding to scour away other plants that compete for the same habitat. For example, the great flood of 1993 had positive impacts on some populations of this plant. Excessive silting during floods, however, which results from poor soil conservation practices, smothers the seeds and seedlings, is a major cause of the Decurrent False Aster's decline.”

Here are some examples:

The wide, deep river, that offers a highway for the traffic and travel of nations, is valued as a world-wide benefit; but what of the little rills that help to form this noble stream? Were it not for them, the river would disappear. Upon them its very existence depends. So men called to lead in some great work are honored as if its success were due to them alone; but that success required the faithful co-operation of humbler workers almost without number--workers of whom the world knows nothing. Tasks uncommended, labor without recognition, is the lot of most of the world's toilers. And in such a lot many are filled with discontent. They feel that life is wasted. But the little rill that makes its noiseless way through grove and meadow, bearing health and fertility and beauty, is as useful in its way as the broad river. And in contributing to the river's life, it helps achieve that which alone it could never have accomplished.

The lesson is one needed by many. Talent is too much idolized, and station too much coveted. There are too many who will do nothing unless they are recognized as leaders; too many who must receive praise, or they have no interest to labor. What we need to learn is faithfulness in making the utmost use of the powers and opportunities we have, and contentment in the lot to which Heaven assigns us. {Education pg.116-117}

A microscope will really help with this project.

If you are into Geocaching, look for or consider sponsoring a CITO cache event. You can also look for a river conservation group. You may have success contacting the local government for info on a river or stream that needs cleanup and support for getting it done (free trash disposal for example).