1. What are the characteristics of a taiga?

The taiga is the largest terrestrial biome and represents 29% of the world’s forest cover. This biome is dominated by coniferous trees (needle-leafed trees). The taiga is located from about 50 degrees N to 70 degrees N. There is no taiga in the southern hemisphere. The taiga has extreme temperature variation between the seasons with long cold winters dominating the climate. Low precipitation and shallow soils are also common in these areas.

2. What or other names are used for the taiga biome?

3. What two countries contain most of the taiga?

Canada and Russia contain most of the taiga. Much of Alaska is taiga, and some is also located in the northernmost reaches of the continental United States. Taiga is also typical in Finland, Norway and Sweden.

4. What biome is found north and south of the taiga?

Tundra (no trees) to the north; temperate deciduous forest to the south.

5. What biome is often found in low-lying pockets within the taiga?

Bogs are common in those areas. For more information about bogs, see the Bogs & Fens honor.

6. What is permafrost and where can it be found?

Permafrost (permanent frost) is where the ground remains frozen year round. During the summer the top layers may melt but the soil below remains frozen all year. Tundra and portions of the Taiga have permafrost. Permafrost creates challenges for utility lines that can not be buried, foundations that warm up the soil and crack, roads and other construction that require special measures.

7. What trees are commonly found in the taiga? Be able to identify them.

Coniferous trees such as pines, spruces, firs and tamarack (Larch) are common.

Where there is more moisture and protection from the extreme cold there will also be birches, alders and poplars.

8. Which coniferous tree in the taiga looses its needles in the fall and grows new ones in the spring?

9. What non-flowering plants are common in the taiga? Be able to identify them.

10. What animals are commonly found in the taiga? Be able to identify them.

11. What birds are common in the Taiga? Be able to identify them.

12. How does fire affect the taiga? 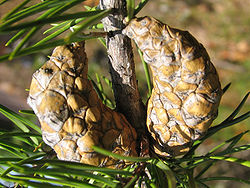 Natural fires from lightning occur every 70-100 years in the taiga. Many of the trees and plants of the taiga are fire resistant (their bark does not burn well), or like the Jack Pine, require fire to open the cones to replant the forest. Fires clear underbrush, help fertilize the soil, and renew the forest. However fires also threaten homes, businesses and infrastructure. Fires burn wood that could be harvested. Therefore the government spends a lot of effort to reduce wildfire effects.

13. What two important resources are provided to us by the taiga?

14. Learn about one invasive species that affect the taiga. 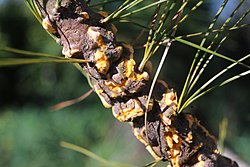 White Pine Blister Rust – This fungus was introduced from Asia. The spores from this fungus first infect Gooseberries and/or Wild Currents. It then spreads to the needles of white pines (pines with 5 needles in each cluster) and eventually kills the pine tree when it gets to the bark of the trunk of the tree.

15. Prepare an object lesson about a plant or animal or bird that lives in the taiga. Tell this lesson at a club worship. Be sure to include a bible text in this presentation.

Here is one example:

It is only when burned by fire that a cone from a Jack Pine will open (explode from the heat). The seeds are released from the cone and new life begins. Like the fire, trials in our lives sometimes cause us to do or learn new things that can truly bless us if we rely on God for our strength and direction.

"And we know that all things work together for good to them that love God" - Romans 8:28

16. Do at least two of the following activities:

a. Visit an exhibit or conservatory of coniferous tree species.

Look for an Arboretum, or perhaps a place that explains about the lumber business. Often there will be a local park focused on trees, or some other place like a zoo might double as an Arboretum.

b. Make a collection of at least 5 types of coniferous tree leaves.

c. Visit a zoo where there are animals typical of the taiga biome.

d. Watch a DVD or video about the taiga or plants or animals that live in the taiga.

e. Draw or paint a picture of something you had fun learning about while studying the taiga.

f. As a group, make a short video about a real life taiga conservation project. Explain why this specific habitat should be saved.

g. Visit a lumber store and learn to identify by their grain texture at least 3 species of trees that grow in the taiga.

h. Visit the Taiga and take pictures of some of the plants and animals.