1. Making use of household products build a 3-D model of the water atom. Explain its chemical composition.

The water molecule is formed when two Hydrogen (H) are united via a covalent bond to one Oxygen atom (O); H2O. There are many ways to create models. The photos below provide some ideas. 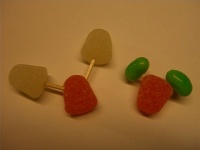 2. List and describe (in writing or orally) some characteristics of water that distinguish it from nearly all elements.

Water is odorless, tasteless and colorless. Water has a remarkable ability to resists rapid changes in temperature. As a result, water-cools and warms up more slowly than air. This serves as a clear advantage for marine life that requires a more stable body temperature, creating a more desirable environment in which to live.

Another remarkable ability of water is that it expands when it freezes. This characteristic of water gives it the ability to sustain marine life during the winter seasons, after the water has frozen on top. The expansion of water also causes crystals to form. This gives water the ability to kill cells since the crystals can break cells apart. Freezing water can also causes rocks to break after the water expands from inside.

3. Making use of photos, diagrams, or any other form of visual aid illustrate the three states of water.

Water has three phases: solid (ice), liquid (water), gas (vapor). These can be illustrated in a diagram by showing how the water molecules are structured in each state:

Solid
In a solid the particles (ions, atoms or molecules) are closely packed together. The forces between particles are strong so that the particles cannot move freely but can only vibrate. As a result, a solid has a stable, definite shape, and a definite volume. Solids can only change their shape by force, as when broken or cut.

Liquid
A liquid is a nearly incompressible fluid that conforms to the shape of its container but retains a (nearly) constant volume independent of pressure.

Gas
A gas is a compressible fluid. Not only will a gas conform to the shape of its container but it will also expand to fill the container.

4. Describe, illustrate or represent the difference between clouds, snow and rain.

Clouds, snow, and rain are all made up of some form of water. A cloud is made of tiny water droplets and/or ice crystals, a snowflake is an aggregate of many ice crystals, and rain is just liquid water.

5. Through photos or diagrams identify and list the five main types of precipitation.

The main types of precipitation are:

6. What is the boiling and freezing point of water?

7. Water Trivia: The following questions can be utilized in different forms to promote learning and understanding about water. Questions can be adapted for Jeopardy, Bingo, and Wheel of Fortune among many others. Creativity is strongly encouraged.

a. What is the estimated weight of one gallon/4 liters of water?

b. The human body consists of how much water?

c. What is the largest ocean on Earth?

d. What is the largest lake in the World?

e. What is the largest lake in North America?

f. Can sound travel faster through water or air?

It travels faster through water Speed of sound

g. What is the deepest point in the world’s oceans?

h. What is the longest river on Earth?

i. How long can a person survive without water?

The presence of Calcium and Magnesium in the water

k. What uses the most water in households?

The toilet and shower use approximately 27% of household water

l. What is the word used to describe how much water vapor is in the air?

m. What is the name of the canal that connects the Pacific Ocean with the Atlantic Ocean?

o. How much water do you need to drink daily?

It is commonly recommended to drink eight 8-ounce glasses, which equals about 2 liters, or half a gallon. Though, some experts recommend drinking a half-ounce to an ounce for each pound of your body weight.

p. What chemical is added to water to kill harmful germs?

q. How many gallons/liters of water are used in a 5-minute shower?

A typical shower uses 2.1 gallons per minute (gpm) So, a 5 minute shower would used a total of 10.5 gallons.

r. What is the longest navigable river in your country?

The Mississippi [In the U.S.]

s. T or F: Water is often called the universal solvent because many things can be dissolved in it.

a. How much of the earth is covered by water?

Water covers 71% of the Earth's surface. It is vital for all known forms of life.

b. How much of the earth’s water is fresh water?

Only 2.5% of this water is freshwater, and 98.8% of that water is in ice (excepting ice in clouds) and groundwater. Less than 0.3% of all freshwater is in rivers, lakes, and the atmosphere, and an even smaller amount of the Earth's freshwater (0.003%) is contained within biological bodies and manufactured products. A greater quantity of water is found in the earth's interior.

c. Where is water found on earth?

On Earth, 96.5% of the planet's crust water is found in seas and oceans, 1.7% in groundwater, 1.7% in glaciers and the ice caps of Antarctica and Greenland, a small fraction in other large water bodies, and 0.001% in the air as vapor, clouds (formed of ice and liquid water suspended in air), and precipitation.

9. Select three of the following and discuss at least one way water is used.

The most important use of water in agriculture is for irrigation, which is a key component to produce enough food.

Water is heavily used to form solutions and mixtures for washing processes. A number of industrial processes rely on reactions using chemicals dissolved in water. Washing is also an important component of several aspects of personal body hygiene.

To function properly and regulate body temperature, the human body requires between one and seven liters of water per day to avoid dehydration.

The evaporation of water carries heat away from fire. Because of this, water is very useful as a fire extinguishing fluid.

The use of water plays a critical role in the world economy. The transportation of materials through rivers and canals by means of cargo ships and tankers fosters international shipping and trading.

10. What is a body of water? Through photos, diagrams or sketches, be able to illustrate the following bodies of water below, naming one that can be found in your city, town, county or state. (if possible)

a. River
A river is a natural flowing watercourse, usually freshwater, flowing towards an ocean, sea, lake or another river.
b. Lake
A lake is an area of variable size filled with water, localized in a basin, that is surrounded by land, apart from any river or other outlet that serves to feed or drain the lake. Lakes lie on land and are not part of the ocean (except for sea lochs in Scotland and Ireland), and therefore are distinct from lagoons, and are also larger and deeper than ponds, though there are no official or scientific definitions.
c. Sea
A sea is a large body of salt water that is surrounded in whole or in part by land.
d. Ocean
An ocean is a body of saline water that composes much of a planet's hydrosphere. On Earth, an ocean is one of the major conventional divisions of the World Ocean, which covers almost 71% of its surface.
e. Rapid
Rapids are sections of a river where the river bed has a relatively steep gradient, causing an increase in water velocity and turbulence.
f. Canal
A canal is a human-made channels for water that cuts across a drainage divide.
g. Creek
A creek is a small river. There is no official definition delineating the size boundary between a river vs a creek.
h. Basin
A drainage basin is an extent of land where water from rain or snow melt drains downhill into a body of water, such as a river, lake, reservoir, estuary, wetland, sea or ocean. The drainage basin includes both the streams and rivers that convey the water as well as the land surfaces from which water drains into those channels, and is separated from adjacent basins by a drainage divide.
i. Glacier
A glacier is a persistent body of dense ice that is constantly moving under its own weight.
j. Gulf
A gulf is a large bay that is an arm of an ocean or sea.
k. Harbor
A harbor is a body of water where ships, boats, and barges can seek shelter from stormy weather, or are stored for future use.
l. Lagoon
A lagoon is a shallow body of water separated from a larger body of water by barrier islands or reefs.
m. Reservoir
A reservoir is an enlarged natural or artificial lake, storage pond or impoundment created using a dam or lock to store water.

11. Discuss with a group the biblical context of at least three of the following text as each relates to the significance of water in the bible.

God commanded that the waters bring forth life for all water living creatures.

In the midst of fear and doubt, God used the staff of Moses to open the Red Sea so the children of Israel could walk through on dry ground.

The great commission to all believers, to go unto the entire world and baptize by immersion in water; all those who believe in the name of the Father, Son, and the Holy Ghost.

A man must be born again in the Spirit and by the act of baptism (immersion in water) to enter into the Kingdom of God.

Jesus said that the water that He gives is unlike any water, for we will never thirst again and will lead us to everlasting life.

John the Revelator was shown crystal clear water flowing from the throne of god and the Lamb.

12. Demonstrate a technique that can be used to convert salt water into clean drinking water.

The distillation method can be used to convert salt water into clean drinking water. This process basically brings the salt water to a boil, causing the water to evaporate, leaving the salt and other chemicals behind. The evaporated water is then catpured and recondensed by cooling to form fresh drinking water.