1. What is the approximate number of named varieties of wattles in Australia?

There are roughly 1300 species of Wattles worldwide, about 960 of them native to Australia, with the remainder spread around the tropical to warm-temperate regions of both hemispheres, including Africa, southern Asia, and the Americas. Wattles are trees and shrubs belonging to the genus Acacia.

2. a. What are phyllodes?
b. What work do they do for the plant?
c. Why are phyllodes so important in the study of acacias? 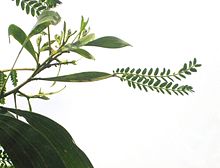 Acacia koa with phyllode between the branch and the compound leaves

Phyllodes are modified leaf stems (also called petioles). In some plants, the petioles become flattened and widened, and the true leaves may become reduced or vanish altogether. Thus, the phyllode comes to serve the purpose of the leaf. Phyllodes are common in the genus Acacia, especially the Australian species, at one time put in Acacia subgenus Phyllodineae. Sometimes, especially on younger plants, partially formed phyllodes bearing reduced leaves can be seen.

In Acacia koa, the phyllodes are leathery and thick, allowing the tree to survive stressful environments. The petiole allows partially submerged aquatic plants to have leaves floating at different depths; the petiole being between the node and the stem.

The vertical orientation of the phyllodes protects them from intense sunlight, as with their edges towards the sky and earth they do not intercept light so fully as horizontally placed leaves.

Phyllodes are important in the study of Acacias because they are distinctive and can therefore be used to determine which species an Acacia belongs to.

Phyllode details are important as they are used as "key" characters in identification. Some important things to note are size and shape of the phyllodes, the type and number of veins, whether penni- or net-veins, length of leaf stalk and gland position. - Marion Simmons, Association of Societies for Growing Australian Plants (ASGAP)

3. How are acacias classified into two major groups?

Pinnate leaves are compound, consisting of leaflets. The word pinnate comes from the Latin word pinna for "feather". In fact, the word pen shares this origin, as the first ink pens were made from feathers. In bipinnnate leaves, the leaflets have leaflets of their own, as in the top image to the right.

Phyllodes are modified petioles (leaf stems). In some plants, the petioles become flattened and widened, and the true leaves may become reduced or vanish altogether. Thus, the phyllode comes to serve the purpose of the leaf.

Some Acacia's have bipinnate foliage at the ends of the phyllodes. These are usually classed with the acacias with phyllodes.

4. How does the shape of the seed pod and the way the seeds lie in the pod help in identification?

Some species of acacia are difficult to tell apart. They may be identical in every other outward appearance, but have starkly (or subtly) different seed pods. For example Acacia farnesiana and Acacia pulchella look very much alike, but the seed pods are different.

Acacia pods may be curled, withered, straight, long, short, or in between. The seeds may lie in the pods sideways (transversal) or lengthwise (longitudinal).

5. How many acacias in your state have true leaves (bipinnate) when adults?

There are three subgenera of Acacias that retain bipinnate leaves when fully grown, namely Botrycephalae, Pulchellae, and Aculeiferum.

6. a. In seeding acacias what is seen first, true leaves or phyllodes?
6 b. How many have true leaves?

The first leaves to emerge from an acacia sprout are true leaves. In plants that will develop phyllodes, the true leaves persist until the plant is about a meter tall.

In Australia, the great majority of acacias develop phyllodes. For example, in New South Wales, which hosts 230 native species of acacias, only 17% have true leaves. However, acacias with phyllodes are native only to Australia.

7. What must happen to an acacia seed before it will germinate and grow?

Before an acacia seed can germinate, the seed coat must be cracked. This can happen by any of several methods, but fire is the most common. People who grow wattles can crack the seed coats themselves using a three-cornered file. Seed coats can also be cracked by being run over by heavy machinery during construction projects, or by other physical stresses.

8. What acacias phyllodes are used to feed stock in times of drought?

The phyllodes of the Acacia cyanophylla (Blue Leaf Wattle) have been used to feed sheep during times of drought.

Acacia aneura is known as the "King of Fodders".

Sheep and other livestock are exceedingly fond of Acacia pendula especially in times of drought. For this reason, it has nearly been extirpated from parts of the States.

9. What is the bark of some acacias used for in Australia?

10. What species of acacias are used for furniture making?

Most acacia species are used for valuable timber; such are Acacia melanoxylon (Blackwood) from Australia, which attains a great size; its wood is used for furniture, and takes a high polish; and Acacia omalophylla (Myall Wood, also Australian), which yields a fragrant timber, used for ornamental purposes.

11. How do acacias help and benefit man, animals, insects, birds?

Acacia seeds are often used for food and a variety of other products.

In Burma, Laos and Thailand, the feathery shoots of Acacia pennata are used in soups, curries, omelettes, and stir-fries.

Honey made by bees using the acacia flower as forage is considered a delicacy, appreciated for its mild flowery taste, soft running texture and glass-like appearance. Acacia honey is one of the few honeys which does not crystallize.

Acacia is listed as an ingredient in Fresca, a citrus soft drink, and Barq's root beer, as well as in Läkerol pastille candies, Altoids mints, and Wrigley's Eclipse chewing gum.

Acacia arabica is the gum-Arabic tree of India, but yields a gum inferior to the true gum-Arabic.

Many Acacia species have important uses in traditional medicine. Most all of the uses have been shown to have a scientific basis, since chemical compounds found in the various species have medicinal effects. A 19th century Ethiopian medical text describes a potion made from an Ethiopian species of Acacia (known as grar) mixed with the root of the tacha, then boiled, as a cure for rabies. An astringent medicine, called catechu or cutch, is procured from several species, but more especially from Acacia catechu, by boiling down the wood and evaporating the solution so as to get an extract.

A few species are widely grown as ornamentals in gardens; the most popular perhaps is Acacia dealbata (Silver Wattle), with its attractive glaucous to silvery leaves and bright yellow flowers; it is erroneously known as "mimosa" in some areas where it is cultivated, through confusion with the related genus Mimosa.

Another ornamental acacia is Acacia xanthophloea (Fever Tree). Southern European florists use Acacia baileyana, Acacia dealbata, Acacia pycnantha and Acacia retinodes as cut flowers and the common name there for them is mimosa.

Ornamental species of acacia are also used by homeowners and landscape architects for home security purposes. The sharp thorns of some species deter unauthorized persons from entering private properties, and may prevent break-ins if planted under windows and near drainpipes. The aesthetic characteristics of acacia plants, in conjunction with their home security qualities, makes them a considerable alternative to artificial fences and walls.

Acacia farnesiana is used in the perfume industry due to its strong fragrance. The use of Acacia as a fragrance dates back centuries. In The Bible, burning of acacia wood as a form of incense is mentioned several times.

Acacia is also used for lumber and as a source of tannin, but these qualities are discussed elsewhere in this chapter, so we will only mention them here.

12. Make a collection of 10 or more dried pressed wattles with flowers and phyllodes and where possible pods and seeds. Show dates, place collected, common and scientific names. Some must be spike type flowers, some raceme type or single balls and some bipinnate leaves.
OR
20 or more close-up photographs you have taken of wattles showing the above details.

The best approach to this requirement is to go out into the field and find some wattles - then identify them. There are numerous books and CDRoms available for purchase that will help in identifying the various species. There are also a few dichotomous keys online, such as this one which are free (though not necessarily easy to use).