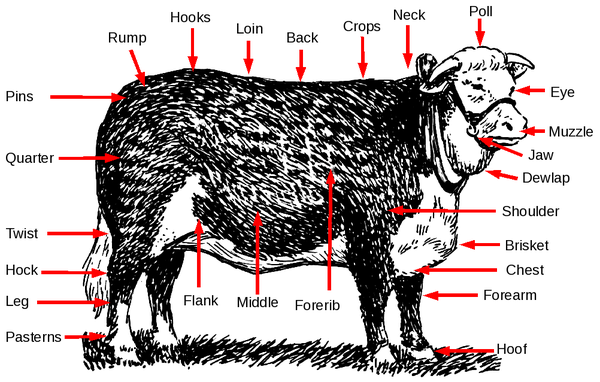 2. What are four characteristics of a good heifer?

a) Weight of the heifer, with the ideal between 900 and 1,250 pounds at weaning time. A cow that is too small will usually produce calves that do not grow as much. Larger cows require more maintenance and feed.

c) Fat distribution (finish) should be even.

d) Structural soundness. Look at the feet and legs for any defects such as splay footing (hooves point out), knock knees and curled, small, or uneven toes. Legs should be straight when viewed from behind.

3. What is castration, and what is its purpose?

Castration is the act of removing the testicles of a bull. It is also called steering, as the animal is thenceforth called a steer.

Castration is commonly performed on domestic animals not intended for breeding for the following reasons:

4. Why is dehorning done, and what age is best for dehorning?

Cattle with horns can injur themselves, other cattle, and their handlers. They can also bruise the meat which lowers the value of the cattle. It is best done before the age of three months, as they are more easily handled when they are this young, and they also recover from the procedure more quickly. Dehorning cattle over the age of one year is illegal in many localities, as it is considered inhumane. The procedure should be performed in the late afternoon or early morning when flies are less abundant, and thus, infection less likely. It should never be performed in wet weather as it will take much longer for the wounds to heal.

5. What is creep feeding?

Beef cattle are bred to quickly build up their body mass while deemphasizing milk production. A beef cow's milk production will begin to taper off before its calf's need for it decreases, so creep feeding is introduced to fill the gap. A creep feeder is an enclosure that holds feed so that it can be easily accessed by a small calf, but not accessed at all by grown cattle.

Calves born in the early spring or late fall benefit the most from creep feeding because the availability of grass in the pasture is decreased during these times.

The ideal time to wean a calf is when it is six to eight months old, though there are a variety of factors that can affect this. In hard times, such as a drought, a calf could be weaned earier for the mother to get stronger before calving again. This will allow her secretory tissue to be restored before she calves again. Calves can be weaned as early as one month, when they begin eating grain and hay, optimal time for weaning is six months. The longer a calf is on a cow the healthier it will be and the faster it will grow.

7. What are the housing needs of cattle?

Cold weather will not hurt a cow so much as rain will. Cattle need a shelter they may enter whenever weather becomes too much for them. Such a shelter (like a barn or a simple shed) would provide enough cover. If they are able to be on pasture anytime they want then when they needed the protection of a barn they would go into it.

8. Why is it best to put feed and water at opposite ends of the pen from each other?

10. What type of feed is required during the following:

Calfs need colustrum in the first several days. Than they switch to milk for 4-10 weeks. Than to starter feed transitioning to regular feed. Here is a detailed guide: http://www.uky.edu/Ag/AnimalSciences/pubs/asc161.pdf Also give access to grass or hay so the calf can start sampling at an early age.

Calf manna and grain are appropriate along with grass and/or hay. If they don't want to eat you can sprinkle milk replacement powder on the feed to get them interested.

11. How can a heifer be trained to become a gentle cow?

Regular (daily if possible) handling of the animal will generally result in a more gentle animal. Teach it to lead on a rope in the first several months.

12. Care for one or more calves for a period of six months.