1. Describe the proper type of pigeon house or loft, perch, trap, and nest box to use for pigeon raising. List the needed interior equipment for a loft.

Houses for pigeons are generally called lofts. Pigeon houses are also sometimes referred to as "coops" although the word seems to have originally applied to the breeding pens inside the housing. There are as many different kinds of enclosures used to house pigeons in as there are pigeon fanciers. There are no real constraints on the design of housing for pigeons but there are some things that most fanciers find desirable.

Make these easy to fill and consider automatic waterers since birds can die within a few hours without water.

Most fanciers have at least two pens for their pigeons and often you'll encounter fanciers with more than two pens or possibly multiple pigeon lofts. Extra pens allow for the keeping of spare, unmated females and males which can be useful to replace existing pigeons which might perish from disease or predation. Because it can be difficult to determine the sex of a young pigeon it is also handy to have extra pens for pigeons that have been weaned but which have not given external indications of their sex yet. 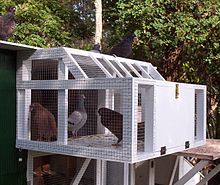 For those pigeon fanciers that fly their pigeons (not all pigeon fanciers allow their pigeons to fly freely outside of their aviary) the pigeons need a means of egress to the loft. A trap or at least bobs and landing board allows the pigeon to get back into their home when they are ready to do so. There are different variations of trap and bobs used. Racing pigeons are commonly trapped home using a bob wired trapping arrangement that the birds push against the bob wires to gain access, but are restricted by the wires when trying to get back outside. Another form of trap typically called a Sputnik trap (pictured) uses an openings set on an angle which are just wide enough for one bird to gain access by dropping through into the loft.

Sometimes pigeon fanciers cannot allow their birds complete liberty due to complaints of neighbors or the presence of raptors. However, pigeons have much better health and seem to be in much better spirits when they're given room to fly. So most fanciers, including those that let their birds fly, will build a large enclosed area free of obstacles where the pigeons can fly as freely as they wish. This is usually referred to as a flypen.

Pigeon fanciers will often provide their mated pairs with nest boxes in which to build their nests. Because pigeons are quite territorial about their nesting area pigeons co-exist much more harmoniously when each mated pair has two nest boxes of their own.

Again, pigeon fanciers will often provide their birds (both mated and unmated pigeons) with more perches than the birds need. Because pigeons are also quite territorial about their perch it is best to insure that every pigeon in the loft has lots of places to perch.

2. Know a good formula for seeds, grain, and grit to be used for feed and in what proportions they should be mixed. Why should less corn be used in warm climates?

Most pigeon fancier use commercial mixes successfully, but you may want to mix your own food to achieve specific results or for fun. National Pigeon Association offers a long page discussing appropriate feed mixes. http://www.npausa.com/keeping/feeding.htm and this page discusses the components of feed: http://www.pipa.be/en/newsandarticles/pigeonandloft/pigeon-feed

Corn is one of the best types of pigeon feed because:

In warm climates corn is not recommended because of its high fat content. Corn can cause the birds to get fat in a warm climate, but can keep the birds warm in a cold climate.

3. What is the importance of the different parts of the pigeon's wing, especially the primary and secondary flight feathers?

Flight feathers (Pennae volatus) are the long, stiff, asymmetrically shaped, but symmetrically paired pennaceous feathers on the wings or tail of a bird; those on the wings are called remiges (singular remex) while those on the tail are called rectrices (singular rectrix). Their primary function is to aid in the generation of both thrust and lift, thereby enabling flight.

The flight feathers of some birds perform additional functions, generally associated with territorial displays, courtship rituals or feeding methods. In some species, these feathers have developed into long showy plumes used in visual courtship displays, while in others they create a sound during display flights. Tiny serrations on the leading edge of their remiges help owls to fly silently (and therefore hunt more successfully), while the extra-stiff rectrices of woodpeckers help them to brace against tree trunks as they hammer. Even flightless birds still retain flight feathers, though sometimes in radically modified forms.

Primaries are connected to the manus (the bird's "hand", composed of carpometacarpus and phalanges); these are the longest and narrowest of the remiges (particularly those attached to the phalanges), and they can be individually rotated. These feathers are especially important for flapping flight, as they are the principal source of thrust, moving the bird forward through the air. Most thrust is generated on the downstroke of flapping flight. However, on the upstroke (when the bird often draws its wing in close to its body), the primaries are separated and rotated, reducing air resistance while still helping to provide some thrust. The flexibility of the remiges on the wingtips of large soaring birds also allows for the spreading of those feathers, which helps to reduce the creation of wingtip vortices, thereby reducing drag. The barbules on these feathers, friction barbules, are specialized with large lobular barbicels that help grip and prevent slippage of overlying feathers and are present in most of the flying birds.

Secondaries are connected to the ulna. In some species, the ligaments that bind these remiges to the bone connect to small, rounded projections, known as quill knobs, on the ulna; in other species, no such knobs exist. Secondary feathers remain close together in flight (they cannot be individually separated like the primaries can) and help to provide lift by creating the airfoil shape of the bird's wing. Secondaries tend to be shorter and broader than primaries, with blunter ends (see illustration). They vary in number from 6 in hummingbirds to as many as 40 in some species of albatross. In general, larger and longer-winged species have a larger number of secondaries.

4. What is the importance of proper molting? How can the molting season be controlled?

Molting is the process of renewing the feathers. A poor molt results in the bird not having good feathers which can adversely impact flight and racing performance. 'You may want to replace birds that do not have a good molt on your racing team and not use them for breeding.

Rest, feed, and exercise all impact the molt. Suggestions include:

1. Pigeons that are to be mated around the first of December are separated in September. Because, they are no longer chasing hens, laying eggs or feeding youngsters the molt takes place smoothly and quickly.

2. Rest improves the quality of the feathers positively so a pigeon that is not raced will look better.

3. Feed a mixture designed for molting (higher protein, more legumes) as the raw materials for good feathers come from the feed.

4. Birds in good health will molt better, however some medications including dewormers can reduce the quality of the feathers. Consider the timing of medications to ensure general health vs the quality of feathers during the molt.

5. Raise at least two pairs of pigeons. If homing pigeons, train them to return to their loft from a distance of 25 miles (40 km). If fancy or show pigeons, prepare them for exhibition and exhibit them in a fair or show.

Working with an appropriate 4-H Group (4-H.org to find a club) is a great way to do this requirement as part of a group and to access a show or fair.

The knowledge required to raise pigeons and train them properly is beyond the scope of this answer key. Get a good book on pigeons or at least do some serious reading on the internet to learn about the hobby.

Pigeons have been raised for thousands of years, Adam and Eve likely had pet pigeons and Noah released a turtle dove (type of pigeon) from the ark to scout for land.

6. Submit a brief report, covering your experience in the care and training of the above pigeons, including sanitation, avoiding disease, lice, mites, rats, mice, and other vermin.

Note: From information obtained, it was learned that pigeons can carry as many as 14 kinds of diseases. Most are not fatal, but some could be if not treated properly. Before working on this honor, participants should contact agencies in their locality and get the safety information concerning the raising and housing of pigeons.