1. Make at least one puppet, and make or buy two other puppets.

Before you make (or buy) your puppets, you should have an idea of what the puppet show is going to be about, and the type of puppets you will use. It is generally a good idea to write a script first, and then develop the puppets needed for the script. If you will be performing for a multi-cultural audience, you might consider using animal characters instead of human characters. People of any race can identify with an animal more easily than they can with a human character belonging to a different race.

There are many types of puppets to choose from, and the choice will depend on the skill of the puppet maker as well as the skill of the puppeteer. Because they are generally easier to build and work with, we will present only the sock puppet. Other puppet types include hand puppets, rod puppets, shadow puppets, human puppets (think of Sesame Street's "Big Bird"), and others.

Sock puppets can be made from socks or stockings of any colour. Worn-out socks may be used, although socks that are too tattered may fall apart during performance, but socks are usually bought brand-new from the store in order to make sock puppets. Various additions can be glued on in order to give the sock a personality. Streamers and felt strings are popularly glued on for hair. Buttons are sewn on or Googly eyes (obtained from craft or fabric stores) are glued on for the puppet's eyes. Some of the eyes in the gallery above were made by attaching Googly eyes to pom-poms.

Other Types of Puppets 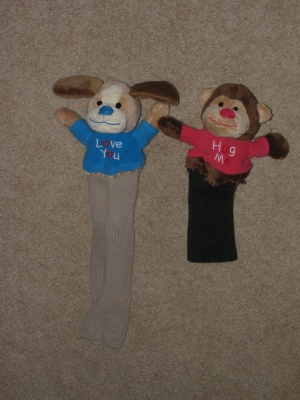 You can make a hand puppet from a stuffed animal plush toy. Do be sure that the toy you select is not one anyone (especially a younger sibling) would object to having cut up. You might consider buying one for this purpose, as used plush toys can be found inexpensively at thrift shops. The plush toys from which the puppets on the right were made were purchased a week after Valentine's Day at a big box store. Deals can be found. Select a plush toy that will allow room for the puppeteer's hand to fit inside.

To turn it into a puppet, examine it carefully and decide where you would need to cut it open so the puppeteer's hand can be inserted. In general, this means cutting the puppet off at the waist. Make the cut and remove most of the stuffing. Trim the ragged edge. Then insert a sock (or a glove) into the puppet and sew it to the bottom edge of the plush toy. The purpose of the sock is to prevent the rest of the stuffing from coming out. If the toy's arms are hollow and can be accessed from inside of the puppet, use a glove instead of a sock, and insert the pinky and thumb of the glove into the arms (you may wish to tack them in place).

If hand sewing, you may find it easier to insert a plastic cup into the sock before trying to sew. Then you can insert the needle until it strikes the cup, and then you know that you have picked up exactly one layer of the sock (it would not be good to miss the sock or to sew the sock closed). Once the sock has been sewn to the plush toy all around, you can either use the puppet as is, or you can make a garment for it.

Puppets can also be made by knitting or crocheting, or with paper mache and a felt puppet is one of the options for the Puppetry Honor. There are many tutorials on YouTube for various styles of puppets.

2. Develop at least three puppet characters with their own voices.

Before you choose a voice for your puppet spend some time deciding what the puppet is going to be like.

Decide what kind of accent the puppet should have. Think about where the puppet may have come from. For instance, if the puppet is a border collie, perhaps it should have a Scottish accent (border collies were originally bred in Scotland). Other distinctive accents to choose from could include British, Southern U.S., Boston, The Bronx (part of New York City), or even a foreigner speaking English (or other) as a second language. Listen to people who have such accents (the Internet is filled with videos of people speaking with various accents).

See if you can think of a hook word or phrase that your puppet likes to use, and incorporate that into the script. For instance, a puppet with a Southern accent might say "I reckon," and a teenage puppet would use a lot of teen jargon. An old lady or old man puppet might speak with a crackly voice and would use antiquated phrases. Decide whether your puppet speaks proper English or makes heavy use of slang. All of these things contribute to the puppet's voice.

Record yourself speaking in your puppet's voice, and listen to it. Try out a lot of different voices, and then listen to the recordings. If you hear something you like, see if you can refine it, again with the recorder running. Once you think you have something, perform the voice for one of your friends and see what they have to say about it. More refinements could be suggested.

The hardest part about writing a script is getting a story idea. You could choose a story from the Bible and either play it as written or adapt it in some way (much the way several VeggieTales movies have a different take on a Bible story). Another source of ideas would be your Investiture Achievement curriculum. All of the progressive classes have requirements that can be met by putting on a skit or by role playing. These can easily be translated into puppet shows.

It's OK to work on these scripts as a group, but be sure that everyone participates.

4. Perform to any audience (not family or immediate friends) at least three times.

Now that you have puppets, voices, and a script, it's time to rehearse your puppet show. Appoint someone the director of the puppet show. This person should not have a puppet to operate, but rather, should take charge of the entire operation. The director will tell the puppeteers what type of expression to use in their voices, and will watch the play as it progresses. The director's job is to point out any mistakes the puppeteers make so that they can correct them rather than reinforcing them. The puppeteers need to understand that the director is only trying to improve the play, and they must be open to constructive criticism.

Once everyone knows their lines and knows how to move their puppets on the stage, it is time to perform the play. This can be done during a Pathfinder meeting, as the children's story during church, or even as the sermon (in whole or in part) on Pathfinder Sabbath. You could also take your show on the road and perform it for school children (though you need to make sure that the school knows the nature of the play - public schools in the U.S. are not allowed to host religious events, and schools in other countries are expressly forbidden to allow evangelism from religions that are not expressly sanctioned by the state.)

You could also offer to perform your play at a day care center.

Another thing you might consider which may (or may not) help your performance go more smoothly is to pre-record the puppet show's sound track, including all the voices. In this way, you may utilize a larger group of people by using different people to operate the puppets and provide the puppet voices. Or you can use the same people. This approach will also allow you to add music and sound effects, and it eliminates the risk of a person botching their lines or succumbing to stage fright.

Other risks are added however. Prerecording the audio removes spontaneity (though in some cases this might be desired) and precludes the possibility of adapting to an unforeseen situation (such as prop or stage failure). You also take on the risk of technical failure of the audio equipment. As with a completely live performance, the key is to practice.

5. Obtain an assessment of each performance by someone not related to the puppeteer.

The reason for have the assessment done by someone who is not related to the puppeteer is to avoid bias. Sometimes relatives will tell you you did a great job even if you did not because they do not want to hurt your feelings, or because they love you so much they are unable to really see your faults.

It is important to get honest feedback, because that is the only way you will be able to improve. If possible, video tape the performance and go through it with the puppeteers afterwards, pausing the videos to discuss various points. The assessor should not only point out the weaknesses and what went wrong, but should also point out the strengths and the things that went right.

Things to look out for:

Try to keep in mind that this honor belongs to the Spiritual Growth, Outreach, and Heritage Series of AY honors, and remember what that implies. The purpose of learning puppetry in this honor is so that it may be used as an evangelism tool. Good puppets, good voices, good scripts, and good execution of the play can be a very effective evangelism tool. Poorly made puppets, boring voices, ill-conceived scripts, and inexpert execution are far less effective. The audience may lose interest, or start thinking about how awful the presentation is. Rather than the audience getting lost in the message, the message gets lost.