1. Learn the manual alphabet used by the deaf.

The American Manual Alphabet is a manual alphabet that augments the vocabulary of American Sign Language when spelling individual letters of a word is the preferred or only option, such as with proper names or the titles of works. Letters should be signed with the dominant hand and in most cases, with palm facing the viewer. 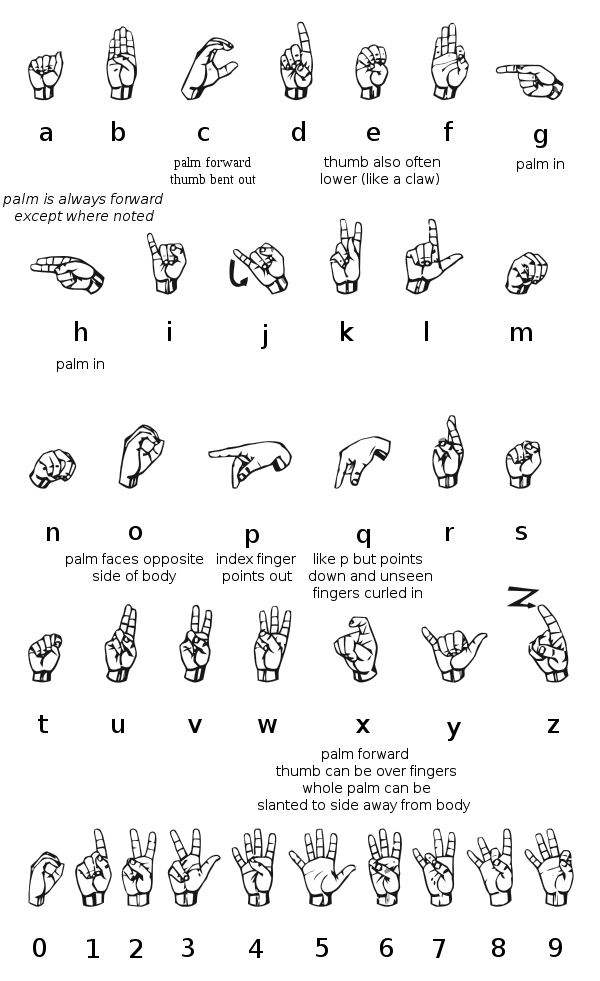 The ASL alphabet is based on an old Spanish manual alphabet that dates back to at least the seventeenth century.

It is used with minor modification in Paraguay, the Philippines, Thailand, Malaysia, Hong Kong, Taiwan, and Singapore. The Asian countries just listed modify the T, for the ASL T is considered obscene. Instead, they use the T of the Irish manual alphabet, which is like an ASL X, but with the thumb tucked into the index finger (that is, the index finger wraps around the tip of the thumb). In Thailand, one indicates points on the left hand for the tone and vowel marks of the Thai alphabet, and aspiration is not indicated. The Paraguay alphabet is identical to ASL, except for the addition of the letter Ñ, which is an N swiveled at the wrist so that the fingers move side to side, and the letters LL and RR, which are L and R plus movement to the side.

It is also used in Germany, Austria, Norway, and Finland, again with a modification for the letter T. T is like G with the thumb placed atop the first knuckle of the index finger.

German Ä, Ö, Ü, and ß are signed like A, O, U, and S but with a downward motion, while SCH is a 5 hand (palm forward). In Norwegian and Finnish, the letters Ä, Å, Ö, Ø are derived by moving A and O (in the case of Å, in a small window-washing circular motion), and it is the Æ that gets the 5 hand (perhaps somewhat flexed).

Many mistakes made by beginning fingerspellers are directly attributable to how the manual alphabet is most often shown in graphics.

In most drawings or illustrations of the American Manual Alphabet, some of the letters are depicted from the side to better illustrate the desired handshape; however in practice, the hand should not be turned to the side when producing the letter. The letters C and O are two that are often mistakenly turned to the side by beginners who become used to seeing them from the side in illustrations. Important exceptions to the rule that the palm should always be facing the viewer are the letters G and H. These two letters should be made, not with the palm facing the viewer or the speaker, but with the palm facing sideways - the hand in an ergonomically neutral position.

As with the letter O, the zero should not be turned to the side, but shown palm facing forward.

This applies only to the cardinal numbers however. Using numbers in other situations, such as with for showing the digits of the time for example, has different rules. When signing the time, the numbers are always facing the person being addressed, even the numbers one through five. Other signing situations involving numbers have their own norms that must be learned on a case by case basis.

When fingerspelling, your hand should be at shoulder height, and should not 'bounce' with each letter. Your hand should stay in one place and only the handshape changes (and orientation for some letters). If you have trouble doing this, you might want to hold your forearm with your nondominant hand in order to force your spelling hand to stay still. 'Bouncing' the letters makes your fingerspelling difficult to read, even for native signers.

As well, clear handshapes are much easier to read than fast fingerspelling. Do not concentrate on speed, as fast fingerspelling with poorly formed handshapes will be difficult to read. Try to fingerspell the whole word at the same speed, not speeding up or slowing down. A pause indicates the beginning of a new word, so if you suddenly slow down because a letter combination is difficult, your reader may think you are starting a new word, leading to misunderstanding. An exception to this sometimes appears at the beginning of a word. The first letter may be held for the length of a letter extra as a cue that the signer is about to start fingerspelling.

2. Have a minimum of three hours of instruction in signing.

Where do you find a sign language instructor? First, if you know a deaf person or someone who knows how to sign, ask them for a referral. If that doesn't work out, check with a local high school guidance counselor. They may be able to direct you to either a free or for-pay program. You can also check into a local social services organization, as many offer sign language classes for free.

Ideally, you will have a volunteer instructor come to instruct your club, but you may need to be flexible. Your club may need to come to the instructor. If only a few people in your club are interested, you should join a class that meets outside of Pathfinder time. If you invite an instructor to teach at your club, be sure to tell her how many students to expect before you ask for a commitment.

Once you find a class and instruction begins, we highly recommend that you take five hours of instruction as required in the Advanced honor rather than just the three required. It will be a lot easier to continue instruction until you have all five hours as opposed to resuming classes sometime in the future.

3. Send and receive finger spelling at the rate of five words per minute using a minimum of 25 letters.

When you are first learning to sign the letters, a good Bible text to practice with is Philippians 4:8, as it repeats the phrase "whatever is" several times. Since it is so repetitive, You should be able to quickly sign the "whatever is" portion to get your speed up. This verse contains all the letters of the alphabet except j, q, and z which can be learned afterwards. Learning a text such as this will also force you to learn each letter on its own (as opposed to always signing K after J). Once a text such as this one has been learned you may be surprised that you can finger spell just about anything.

We present this Bible verse graphically here, showing the first 108 letters of the verse. If you can sign this in under 4 minutes 20, seconds, you will have achieved 5 words per minute (assuming an average of 5 letters per word).

4. Learn at least 100 signs from one or more of the below referenced books.

If you cannot find any of these books, substitute something equivalent.

The titles suggested below are popular Christian songs with few words, or words that repeat (that is our definition of simple). Repetition is very useful when learning something new, especially a language.

a. Explain the difference between Ameslan and signed English, and demonstrate the use of both.

Ameslan, or American Sign Language, has little connection to English grammar. This language was developed by the deaf community as an efficient and expressive method of communication. Signed English, on the other hand, was designed with a more direct connection to English grammar, the theory being that knowing it would make reading and writing in English easier. Signed English follows the same word order and syntax as spoken English, while the word order in Ameslan is conceptually-based.

b. Read and give an oral or written report on a school in your country or state specializing in deaf education.

See the Wikipedia article Schools for the Deaf for a list.